Facing off this weekend, the Schuldt brothers will wear opposing NCHC jerseys, but family will always finish first

Before the bright lights and state-of-the-art facilities, it was a pond. Before National Collegiate Hockey Conference (NCHC) rivalry games, it was grudge matches against the neighborhood kids. Before the name Schuldt was stitched onto jerseys, and Jimmy and John laced up their skates for St. Cloud State University and the University of Nebraska Omaha, respectively, they played for a different team. A homegrown squad where Dad built the annual backyard rink and Mom tied skates, they played on a team of brothers.

“It (growing up with brothers who played hockey) was a lot of fun, always competitive, always great to have your brothers be your best buddies and skate with you and to challenge each other. And I think that is a big part of our passion for hockey,” SCSU senior captain Jimmy Schuldt said.

“Ever since I was three years old we’ve had a rink in our backyard,” said Omaha freshman John Schuldt, the younger of the two brothers. “All of my brothers and I played together after school and at night every day all winter. It’s just what we all loved, and that was just our life.”

Jimmy and John are the middle siblings of four brothers. Their older brother, Joe, played hockey for one year at Michigan Tech before retiring due to concussions, while the youngest Schuldt, Jacob, plays in the Superior International Junior Hockey League (SIJHL) with the Thief River Falls squad.

Steve, the patriarch of the Schuldt family, built backyard rinks for some 15 years while his four sons grew up in Minnetonka, Minn. As a labor of love for their kids who loved a sport, he and his wife, Sheri, renovated and bulldozed the backyard to create an even flatter surface for their homemade rink. To battle early winter darkness of the north, they installed lights so the boys and their friends could play after sunset.

“It would be dark right when they got home from school, so they’d flip on the lights after doing homework and play hockey with their friends in the neighborhood. I think that’s where they fell in love with hockey. It was just a place to develop that passion but even more so, to do what they love while being with their friends and their brothers,” Steve said.

“It wasn’t easy to maintain, but my Dad did a good job putting it up. We’d help him, but he put in so much work to get that thing up and in good condition,” John recalled. “It was just a dream come true for all of us.”

Now, the backyard rink sees fewer skates in a winter season, but the bond the brothers formed on the ice is stronger than ever.

“Jimmy and John rely on their oldest brother, Joe, and even Jacob for moral support, pumping them up and all that stuff, it’s pretty cool to see. I’m more and more amazed at how hockey has brought these guys together,” the father said. “Their relationship has developed into more of a friendship, and they’re each other’s biggest fans.”

“That’s something cool for both of us because we can talk about the college game. I can try and give John advice based on what I experienced as a freshman, and he’ll tell me stories and ask me things about certain aspects of college life and college hockey,” Jimmy said.

In his senior season and third as an SCSU captain, Jimmy is tied for first in scoring in the NCHC among defensemen with eight goals and 17 assists for 25 points. To date, 14 of the Hobey Baker Award nominee's 25 points are on the power play, two are game-winning goals, and he’s racked up 53 blocks in 28 games.

“So far it’s been everything that I hoped for and more,” Jimmy reflected. “This year we’ve learned from our past shortcomings, and we’re hoping to make the next step. SCSU has been so good to me and so good to my entire class, and I’m so thankful for everything I’ve been able to do here.”

Part of the brotherly bond is being there for each other through hockey’s most celebrated moments, but more importantly, some of its toughest. Steve has enjoyed watching the brothers transition from seeking advice from him and Sheri to seeking guidance from each other.

“It’s a hard game, and they need to talk to each other. They depend more on each other and ask ‘What do you do? How do you get through this? How can I think about it differently?’ They’ve all been through tough times, and they’re leaning on each other when that happens. That’s the sign that they really are bonded through hockey,” Steve said.

“One of the things that Jimmy told me at the beginning when I was having a rough start and frustrated with myself, he just said, ‘Work hard. You can control that. You can control your effort, and everything else will come. You can’t control the bounces you’re going to get, you can’t control when your coach is going to put you out onto the ice, but you can control how hard you work.’ He’s someone that does that every day, and he’s been getting rewarded for that the last couple of years at SCSU,” John shared.

“I always try to have fun,” Jimmy said. “John’s really hard on himself when he doesn’t have the best game. If things don’t go the right way I try and remind him, ‘It’s college hockey, these are the best four years of your life.’ Honestly, it’s irreplaceable.”

This weekend, the brothers will play against each other for the second time this season. In December, then-No. 2 SCSU hosted Omaha and swept the Mavericks 2-0 and 7-1. Before this weekend’s matchup in Omaha, both squads had bye weeks, giving them each two weeks of preparation.

“It’ll definitely be fun and even better to play in my place,” John said. “I got to go up to his place, and they pushed us around a little bit so I think that if we put together a couple of good games, anything can happen down in Omaha. We’ll see what happens this weekend, and I’m excited for it.”

Jimmy said he and John usually talk about the teams that their respective schools are going to play against and share advice. But for two games a year, talk of strategy is replaced with some brotherly chirping.

“It’s a bit weird when we’re about to play each other; there’s not much talk about strategy, it’s more trash talk,” Jimmy admitted. “I always want him to have success. I’ve always tried my best to be a good role model and a good source of motivation for him. But twice a year now, I’m cheering against him.”

Before he started college, John would make the hour drive from home to visit Jimmy at SCSU. During those visits, he got to know several other Huskies players who also take the opportunity to tease the Omaha rookie defenseman.

“Once the puck is dropped everyone gets into the zone where it doesn’t matter if you’re playing your brother or some guy you’ve never met. It’s all the same,” John said. “But it was pretty funny between the whistles. I had a faceoff against (SCSU senior forward) Pat Newell, and another one against (SCSU senior co-captain) Jacob Benson and both of those guys were letting me hear it a little bit.”

As when all good things come to a close, it’s a bit bittersweet surrounding the end of Jimmy’s four-year college career, but there’s also great pride that his little brother is living out his own collegiate dreams.

“Seeing him with the jersey, the Omaha jersey that I’ve been playing against and trying to beat all these years. It’s hard to explain, it’s bittersweet because we were all so excited for John last year when he got the chance to play in the NCHC, the best conference in the country, and to finally have the game against each other actually happen is surreal,” Jimmy said.

The entire Schuldt family is making the trip from Minnetonka to Omaha and avoids taking sides in a rather convenient fashion.

“They don’t wear any logos. Just red and black. They're not partial to either team even though I’ve been trying to convince them that it’s my last year and John has three more after this year, so they’ve got to cheer for me,” Jimmy joked.

“The games that we get to watch them play, we can’t lose. We win no matter what team wins,” Steve said. “I’m much more watching each boy perform than watching the team, which is pretty cool for me.”

Through the trip to Omaha and beyond, Jimmy and the Huskies hope to keep getting better and have their eyes on the prize of winning the last game of the season. After three years as a captain, it’s safe to say Jimmy’s legacy at SCSU will endure long after he’s hung up the jersey.

“The purpose of being a captain isn’t to tell people what to do or to put yourself above the other guys in the locker room. It’s to try and do the right thing yourself. Have accountability through your actions and holding other guys accountable after that. I just try to be the best teammate I can be,” Jimmy stated.

When asked if he’d like to wear the ‘C’ for Omaha one day, John answered like a future captain, stating that he’d take on the role if it was the best thing for the team. He also credits Jimmy and his current Omaha captain, senior Mason Morelli, for showing him what a great leader looks like.

“Mason and Jimmy are very similar people from what I’ve seen. They both want the best for not only themselves but every single other guy that they’re around every day,” John said. “I think it’s been incredible to get to spend a lot of time with both of those guys.”

After graduating with a finance degree from SCSU in May, Jimmy plans on continuing his hockey career at the professional level.

“After this year, I’m hoping to go play professional hockey. It’s what I’ve worked my whole life for, that’s been my goal,” said Jimmy, who turned down professional offers after his junior season to lead SCSU one more time, including the chance to face John.

Puck drop for No. 1 SCSU at Omaha is at 7:07 p.m. CT on both Friday, Feb. 22 and Saturday, Feb. 23, with the Huskies looking to lock up their second straight Penrose Cup. 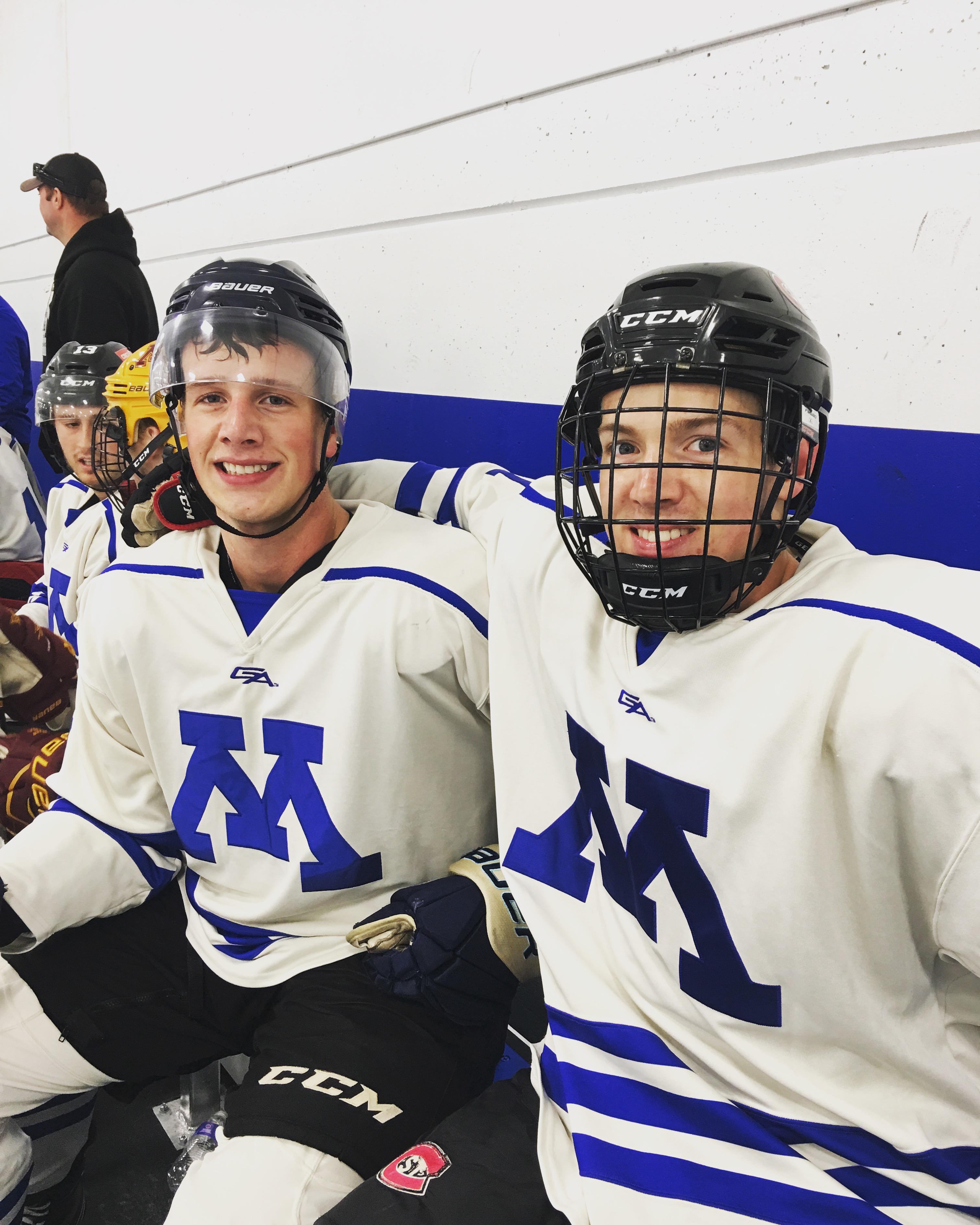 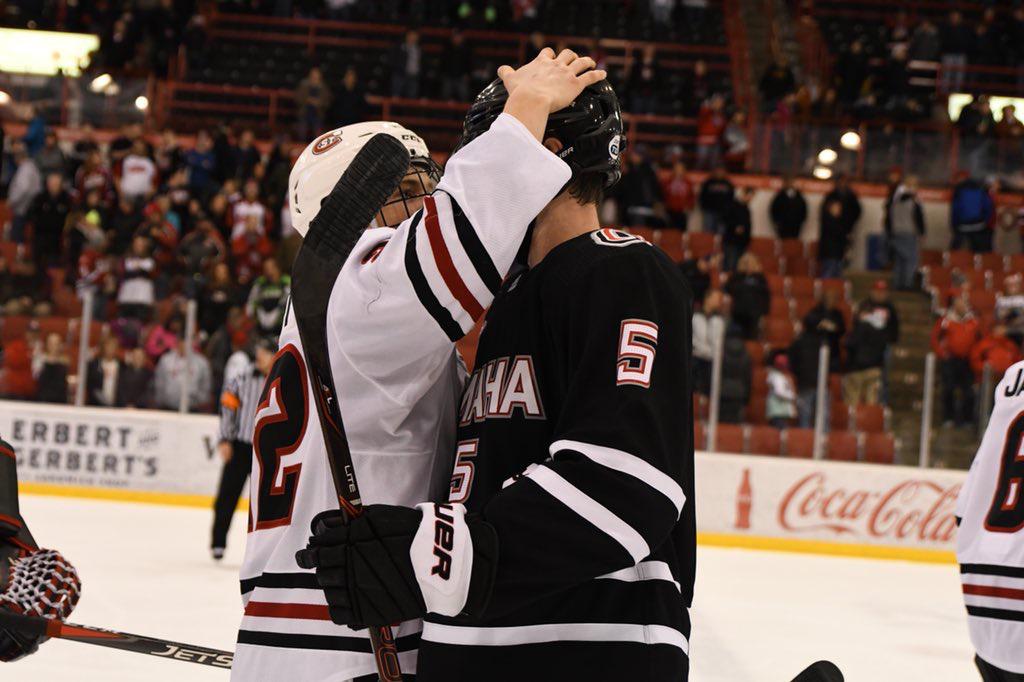 @SusannahDunn It's his glove or blocker, not his helmet