Denver, WMU Each Pick Up Splits with Narrow Wins Saturday

All four NCHC teams in action this weekend earned a win, as both series on the slate settled in splits Saturday. For the second time this season, sophomore goaltender Devin Cooley and No. 7/7 Denver blanked No. 4/4 Minnesota Duluth, pulling out a narrow, 1-0 win with freshman blue liner Slava Demin sniping the single score. The top-10 teams split both of their regular-season series this year after Saturday’s shutout in Duluth. In Kalamazoo, No. 9/9 Western Michigan also picked up a split by doubling up North Dakota, 4-2, behind freshman defenseman Michael Joyaux’s first two career goals. With the win, the Broncos take the regular-season series with UND, 3-1, after a sweep in Grand Forks in November.

Next weekend, all eight NCHC teams are in action with only three weekends remaining in the regular season. Top-ranked St. Cloud State, which has now secured home ice for the NCHC Quarterfinals, heads to Omaha for a pair of games with both teams coming off a bye and the Huskies possibly having a chance to clinch outright or a share of the Penrose Cup next Saturday, depending on results of other games next weekend. One of those series is fourth-ranked Minnesota Duluth traveling to Grand Forks for two games at North Dakota, as the Bulldogs sit 10 points back of SCSU in second place. No. 9/9 Western Michigan enters next weekend in third place, only two points behind UMD, as they fly to Colorado Springs for a two-game set at Colorado College. The final series of the weekend also takes place in Colorado as No. 7/7 Denver hosts Miami for a pair.

Friday’s UMD at UND game is on CBS Sports Network, while the other three games Friday are on NCHC.tv. All four games Saturday are available on NCHC.tv.

Individual game recaps, along with links to highlights, postgame comments, box scores and more, are below.

DULUTH, Minn. – For the second time this season, sophomore goaltender Devin Cooley kept fourth-ranked Minnesota Duluth off the scoreboard and No. 7/7 Denver needed every save to earn a 1-0 win over the Bulldogs Saturday at AMSOIL Arena. With the win, the Pioneers (16-7-4, 8-7-2-2 NCHC) earned a weekend split and a regular-season series split with UMD (18-8-2, 11-6-1-0 NCHC) as the teams also each won once in Denver earlier this season.

Cooley logged his third shutout of the season and of his career, including second against the Bulldogs, as he stopped all 27 shots he faced in his return to action from injury and illness after missing the last 10 games. UMD outshot DU, 27-16, despite the loss.

The only goal of the game came eight minutes into the contest when freshman defenseman Slava Demin fired a shot from the left point that found the back of the net from distance. Fellow freshman Emilio Pettersen set up the goal with a pass from the half wall, while junior Liam Finlay picked up the second assist on Demin’s fourth goal of the season.

The second period saw the only three power plays of the game, including two for Minnesota Duluth, but the teams combined for only nine shots on goal and no goals. The Bulldogs really applied the pressure in the final frame, outshooting the Pioneers, 13-2, over the final 20 minutes, but Cooley came up big multiple times to preserve the whitewash and the win. The Bulldogs pulled their goalie for an extra attacker over the final 1:04, but couldn’t find the equalizer.

Next weekend, Minnesota Duluth heads to Grand Forks for a showdown with rival North Dakota, while Denver returns home to host Miami.

KALAMAZOO, Mich. - Freshman defenseman Michael Joyaux scored the first two goals of his collegiate career to lead No. 9/9 Western Michigan to a 4-2 win over North Dakota Saturday at Lawson Ice Arena. With Saturday’s result, the teams split their weekend series, while WMU won the regular-season series after sweeping in Grand Forks.

After the teams played an even, scoreless first period, junior forward Dawson DiPietro nearly broke through for the home team early in the second period, ringing one off the post. WMU (17-10-1, 10-7-1-1 NCHC) finally snapped the deadlock seven minutes into the second stanza when Joyaux scored his first career goal on a one-time blast from above the left circle just as a power play was set to expire. Senior blue liner Corey Schueneman set up the goal from the point after the Broncos won an offensive zone faceoff. Only 2:19 later, Joyaux doubled the lead with his second career goal, again on the power play, with a blast from above the opposite circle this time through traffic.

Western Michigan made it 3-0 4:23 into the final frame when sophomore forward Josh Passolt scored his 16th goal of the season. Junior defenseman Cam Lee, who had two assists on the night, helped keep the puck in the zone, while Passolt grabbed the loose puck and snapped a wrister from just above the left circle that found the twine.

North Dakota (14-13-2, 8-9-1-0 NCHC) finally got on the board 10:19 into the third period when freshman forward Gavin Hain knocked in a rebound on the far post, after junior Cole Smith sent in a shot from the right circle. UND then cut the deficit in half two minutes later as sophomore forward Jordan Kawaguchi sniped a wrister from the left circle into the far corner as a power play was expiring. Junior captain Colton Poolman set up the goal to make it 3-2 with a pass from the point.

The Broncos sealed the victory, however, with a short-handed goal from junior forward Hugh McGing with 3:09 to go. The puck was knocked out to the neutral zone where senior forward Jade McMullen picked it up and created a 2-on-1 rush with McGing, feeding the Blues draft pick, who deked around UND freshman goalie Adam Scheel and back-handed the puck into the open net.

North Dakota earned another power play late and pulled its goalie for a 6-on-4 advantage, but couldn’t get any closer than two goals. WMU finished with a 28-26 edge in shots on goal, and also won the special teams battle, going 2-for-3 on the power play, while killing 6-of-7 UND power plays.

Western Michigan looks to keep its momentum rolling next weekend when they head west for a pair of games at Colorado College. North Dakota returns home to host rival No. 4/4 Minnesota Duluth for a pair, with Friday’s game on CBS Sports Network. 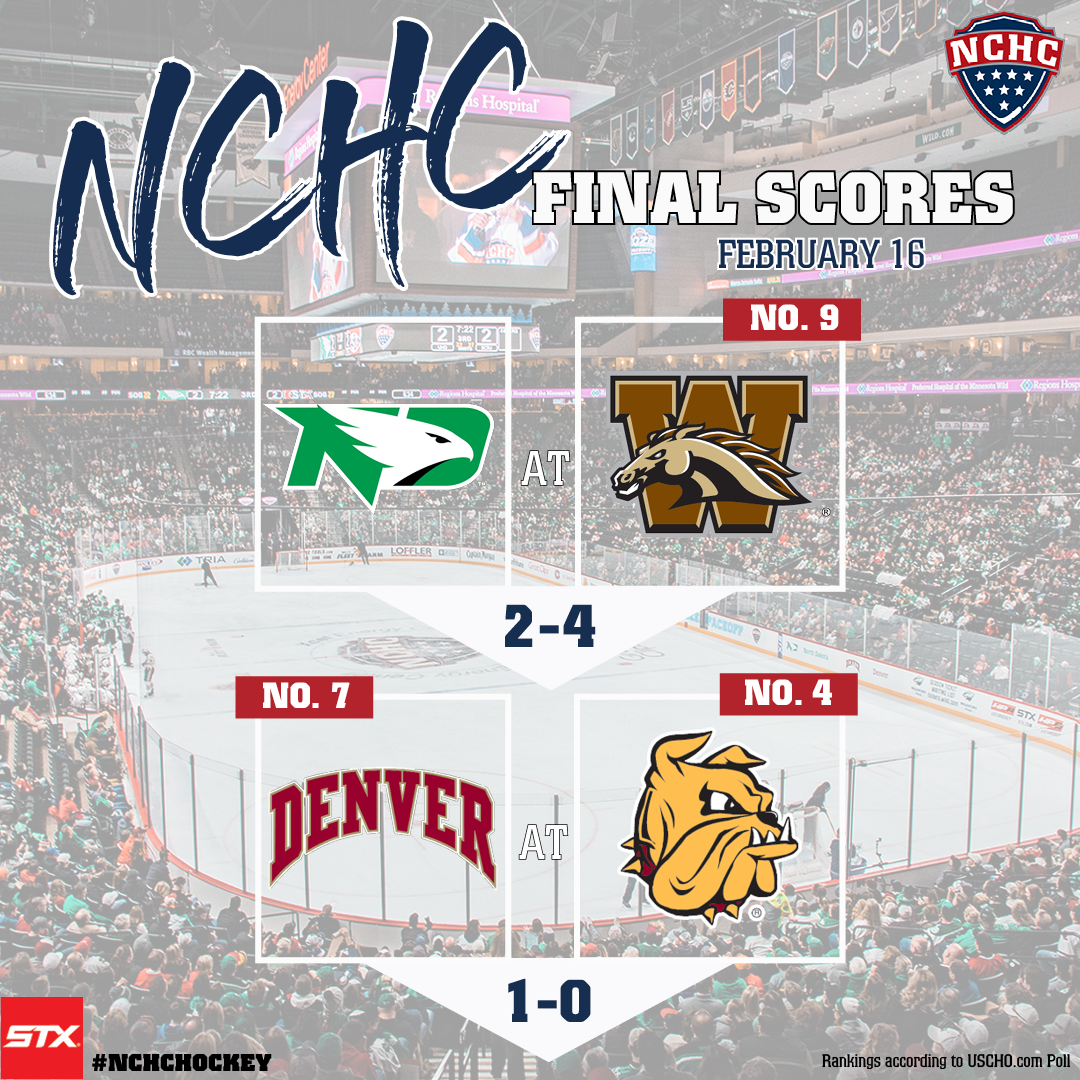 It's #CaptionContest time powered by @SportsEngine! What is @DU_Hockey 🅰️ Griffin Mendel thinking or looking at??… https://t.co/QJcHwwmjN3