UND Downs WMU on Road, while Bulldogs Pull Away from Pioneers on Friday

On another light night of NCHC hockey Friday, one home team and one road team earned victories in the lone two games. In a top-10 tilt in Duluth, No. 4/4 Minnesota Duluth used a three-goal third period and two goals from sophomore forward Justin Richards to pull away from No. 7/7 Denver for a 5-2 win Friday in a match-up of the last two NCAA national champions. In Kalamazoo, North Dakota moved up the standings into a tie with DU for fourth place with a convincing 5-1 win over No. 9/9 Western Michigan at Lawson Ice Arena, striking three times in the first 11 minutes of the game to take control early.

Both NCHC series conclude Saturday night with both games available on NCHC.tv. Following Saturday’s games, only three weekends will remain in the regular season and in the pursuit of the Penrose Cup.

Individual game recaps, along with links to highlights, box scores and more, are below.

KALAMAZOO, Mich. – North Dakota scored on its first shift of the game and struck three times in the first 11 minutes to roll to a 5-1 win over No. 9/9 Western Michigan Friday night at Lawson Ice Arena, exacting some revenge after being swept by the Broncos in Grand Forks earlier this season.

UND (14-12-2, 8-8-1-0 NCHC) wasted no time jumping in front as freshman forward Mark Senden, who finished with a two-point night, found the back of the net only 18 ticks into the game. Junior Cole Smith helped force a turnover behind WMU’s net, while Senden gathered the puck on the outside of the cage, created some space and fired near side from close range to put the Fighting Hawks up early.

UND doubled its lead eight minutes into the game as freshman Jasper Weatherby banged in his own rebound in front of the net on the power play. Junior Ludvig Hoff fired the initial shot from the left circle that was redirected by Weatherby, but saved by WMU senior goalie Trevor Gorsuch. The rebound fell right back to Weatherby, however, who pounced on the loose puck. North Dakota then made it 3-0 less than three minutes later as sophomore Jordan Kawaguchi one-timed a back-hand cross-ice feed from freshman Jackson Keane to complete the early outburst.

Less than four minutes into the second stanza, freshman blue liner Jacob Bernard-Docker made it 4-0 UND with a snipe from above the right circle into the top left corner of the goal. The Broncos (16-10-1, 9-7-1-1 NCHC) finally broke through midway through the middle period when freshman defenseman Mattias Samuelsson took a feed on a 2-on-1 rush behind the net and back-handed a centering pass that hit a UND defenseman’s skate and redirected into the net to make it 4-1 after 40 minutes.

That would be as close the Broncos would get, however. With less than six minutes to go in the game, WMU earned a power play down three and pulled its goalie for an extra attacker and a 6-on-4 advantage. The Broncos created chances but couldn’t find the back of the net. Eventually, UND cleared the zone as senior Hayden Shaw hit fellow defenseman Matt Kiersted stepping out of the penalty box and the sophomore easily deposited the puck for an empty-net goal to seal the 5-1 win.

North Dakota killed all six WMU power plays in the win, while freshman goaltender Adam Scheel compiled 32 saves to earn the win in net. The Broncos outshot UND, 33-20, despite the loss, including 14-4 over the final 20 minutes.

DULUTH, Minn. – Minnesota Duluth sophomore forward Justin Richards scored twice, including once as part of a three-goal third period, to help the fourth-ranked Bulldogs pull away from No. 7/7 Denver for a 5-2 win Friday night at AMSOIL Arena.

The Pioneers (15-7-4, 7-7-2-2 NCHC) actually opened the scoring only 2:50 into the game when senior defenseman Les Lancaster blasted a one-timer from above the right circle top-shelf. Sophomore Ryan Barrow screened UMD junior goalie Hunter Shepard, allowing Lancaster’s laser to get through. The Bulldogs (18-7-2, 11-5-1-0 NCHC) answered a little more than a minute later when senior captain Parker Mackay sent in a slap shot that DU freshman Filip Larsson saved, but Richards went right to the front of the net to bang home the rebound for his first of the night and tie the game at 1-1 only 4:01 into the contest.

UMD grabbed its first lead of the game midway through the second stanza when freshman Noah Cates gathered a shot that was wide of the net, wrapped around and back-handed a soft pass to sophomore Nick Swaney cutting near post for the short-side one-timer.

Midway through the final frame, the Bulldogs doubled their lead to 3-1 as freshman forward Cole Koepke sent a long pass through the neutral zone to Richards in stride, who skated in alone, deked Larsson and went backhand top shelf for his second goal of the night. Just over a minute later, UMD made it 4-1 when freshman Jackson Cates pinged a shot off the crossbar that found its way into the net when classmate Tanner Laderoute skated by and tried to knock in the rebound with his stick but ended up knocking it in with his skate.

The Pioneers attempted a late rally with less than four minutes to play, knocking the puck towards the net until Barrow finally cleaned up the loose puck and potted it in the back of the net from the left side to cut the deficit to two. DU pulled Larsson with two minutes to go for an extra attacker, but the Bulldogs sealed the victory with an empty-netter from Koepke to cap his two-point night in the final minute.

Minnesota Duluth finished with a 29-22 edge in shots on goal, including 12-6 in the decisive third period. Both teams were 0-for-2 on the power play. 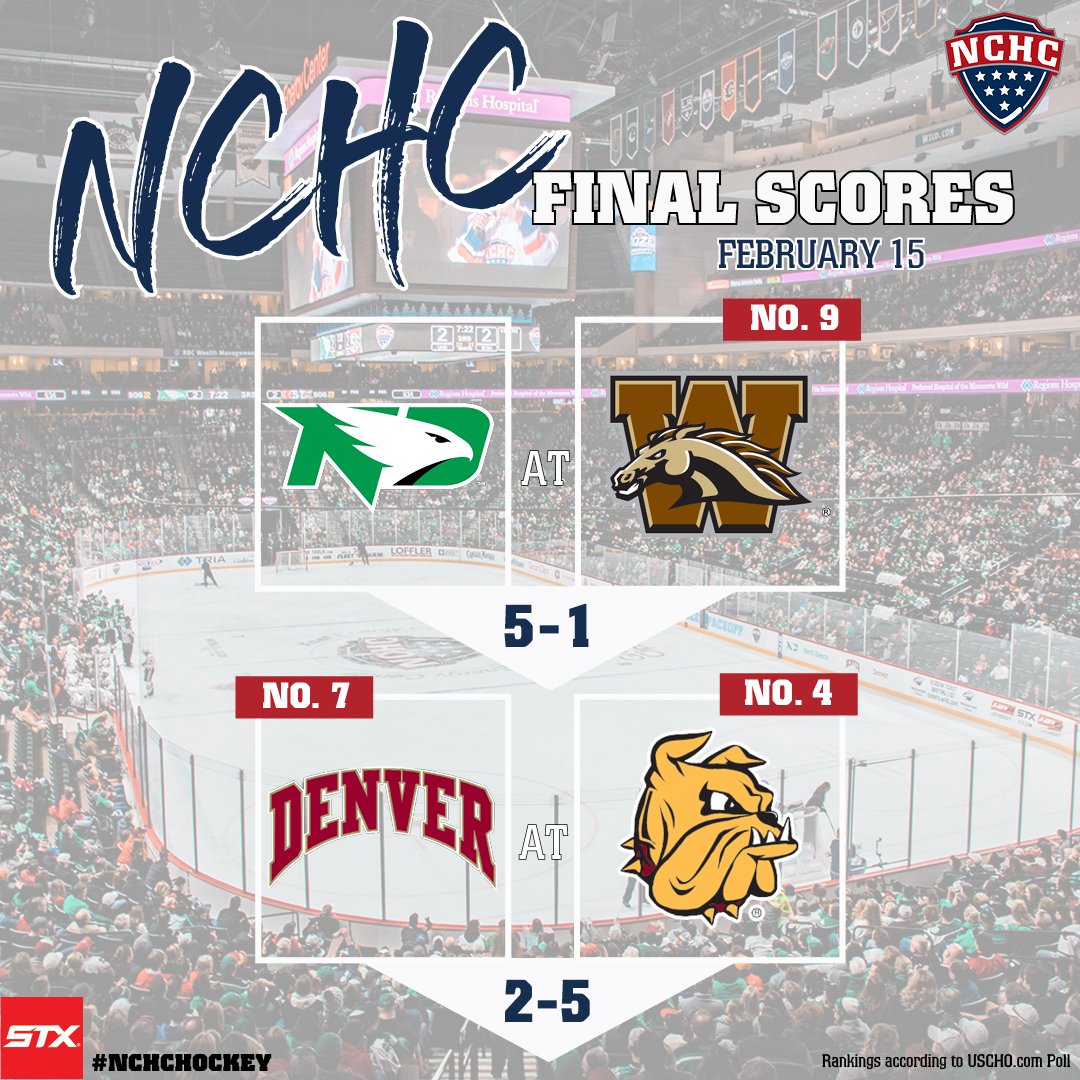 RT @OmahaHKY: A long time coming... Taylor Ward has two goals in a big win for No. 11 Mavericks over No. 15 Denver. If you don't know wh…