COLORADO SPRINGS, Colo. – For the second straight season, in an effort to bring more awareness to the severity of concussions in the sport of ice hockey, the National Collegiate Hockey Conference (NCHC) is once again teaming up with the Headway Foundation for their third annual Concussion Awareness Weekend, which will take place Feb. 1-3, 2019. The NCHC first took part in the event last season.

As part of Concussion Awareness Weekend, NCHC student-athletes and teams playing games Feb. 1-2 will wear helmet stickers promoting the Headway Foundation, as well as help raise awareness through social media and other messaging. The NCHC’s Student-Athlete Advisory Committee (SAAC) representatives are leading the charge at each school, serving as their team’s representative for the weekend. In addition to the NCHC, the Big Ten hockey conference and men’s and women’s student-athletes and teams from ECAC Hockey and the WCHA will also participate in Concussion Awareness Weekend.

"We are thrilled to see the growth and participation of so many collegiate hockey teams during our third annual Concussion Awareness Weekend,” said Paige Decker, co-founder of the Headway Foundation and former Yale hockey player. “The sheer number of athletes rallying behind this weekend is a testament to the progress being made about the proper ways to handle concussions in sports, and we are grateful to be involved with the movement."

"As athletes who have experienced long-term post-concussion symptoms, we understand how important it is to handle this injury properly,” explains Decker. “This includes everything from prevention and timely symptom reporting to proper treatment, support and recovery. We understand that removal from play when a concussion is suspected is often the mentally tougher, but necessary thing to do, and we want to facilitative a productive dialogue around this subject."

The ‘New Tough’ campaign acknowledges that sometimes dealing with concussions in the right way is the harder thing to do, and it requires a new type of toughness. The campaign challenges athletes to handle concussions properly by going against their instinct as an athlete to be tough and put their brain-health first. ‘New Tough’ urges athletes to report possible concussion symptoms right away and be patient during recovery, encourage teammates to seek help and offer support while they heal, and always play the game within the rules by avoiding hits from behind and to the head and neck area.

"Often times making a comeback and playing through injury is glorified in sports, but with ‘New Tough,’ we are acknowledging that sometimes dealing with concussions in the right way is the harder thing to do, and it requires a strong mental toughness during much uncertainty,” said Josephine Pucci, co-founder of the Headway Foundation, former Harvard hockey player and 2014 Olympic silver medalist.

“Our hockey program has a great relationship with Headway, supporting and collaborating on the main goal of combatting concussions,” said Omaha Mavericks senior forward and assistant captain Ryan Galt. “Not only has our team taken steps to improve our concussion protocols, but our fans have also raised resources and community awareness to create a sports culture of care about concussions. We look forward to many years of bettering the concussion care culture and raising awareness with the support of the Headway Foundation.”

As part of the NCHC’s Policies and Procedures Manual, each member institution is required to have their Concussion Management Protocol submitted to the NCAA annually for review through the Sport Science Institute’s Concussion Safety Protocol Checklist.

“We are once again pleased to partner with the Headway Foundation for Concussion Awareness Weekend,” NCHC Commissioner Josh Fenton said. “We have great medical experts on our campuses and within the NCAA that do excellent work for the health and safety of our student-athletes, including those that suffer from concussions. We are hopeful this campaign can provide greater awareness through a player-to-player approach and lead to a safer game.” 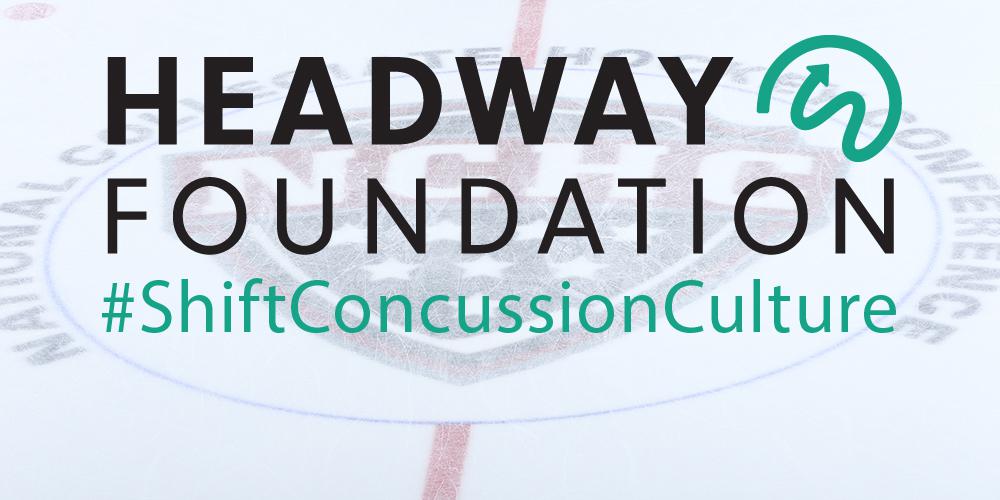