Three Generations, Two Teams, One Love of the Game

While his dad and grandpa played at North Dakota, Omaha senior captain Mason Morelli is relishing his days as a Maverick

OMAHA, Neb. - An NCAA Division I men’s ice hockey career spans 1,460 days in four years of eligibility. Roughly 136 of those days are game days. In the bittersweet final year, seniors like University of Nebraska Omaha forward Mason Morelli know that maybe the most crucial aspect of college hockey is enjoying the flurry of time and leaving behind more than just a name on the wall once it’s all said and done.

“I think when you’re a freshman or a sophomore or even a junior, you don’t really realize how close it is to being done and it really sets in when you’re a senior. It’s like ‘man, this is my last kick of the can,’ so you want to make the most of it and just try to put our time in and hopefully that’ll lead the team to some good things,” Morelli recalled of his collegiate career.

Morelli joined the Century Club with his 100th game played on December 8, 2018 at NCHC rival St. Cloud State. The team captain is undoubtedly in the middle of the best season of his career at Omaha. His 13 goals in 20 games rank second in goal-scoring in the conference and ties for fourth nationally. But Morelli believes his success is a testament to the guys who share the Maverick jersey with him.

“We have a really good group of guys and a big shoutout to everyone who takes part on the ice. They have a big role in everything; it’s a shoutout to the guys on my unit with me,” he said.

Omaha second-year head coach Mike Gabinet described Mason as consistent, a guy that is first out to skate in extra goalie or skill sessions and laughed about actually kicking Mason off the ice from practice.

“He’s just one of those guys that reaffirm when you’re recruiting to make sure you recruit character and work ethic because he does that at a really high level,” Gabinet said. “It’s not on accident; all the success he’s had. As a coach, I’m not surprised because of what he’s put into it.”

Morelli, a native of Minot, N.D., is the third generation of Morelli college hockey players. His dad, Matt Morelli, played in 74 games at the University of North Dakota from 1987 to 1991. His grandfather, Reg Morelli, also played for UND and scored the overtime game-winner and was named the NCAA Tournament Most Outstanding Player in UND’s first national title win during the 1958-59 season.

“It’s just really cool with my dad and grandpa being the hockey fanatics that they are and shaping me and pushing me on the ice and wanting me to be my best. I can’t say enough good things about those two because they shaped me into who I am,” Mason said.

Indeed… as his father’s playing connections helped make Mason a Maverick. Although Mason’s family played at North Dakota, it was his dad’s assistant coach his first two seasons at UND, Dean Blais, that sold Mason on coming to UNO, as Blais was then the bench boss for the Mavericks.

“Omaha gave me a really good opportunity and nothing against North Dakota, they recruited me a little bit too, but it just felt like my fit was at Omaha, and with Coach Blais recruiting me and giving me the chance I got, I was really lucky and really grateful. And with the new rink coming back when I was getting recruited, they were in the process of (building) it and just looking back on it I think I made the right choice because Omaha is really getting into hockey,” Mason explained.

Mason isn’t the only one who feels bittersweet about his years at Omaha coming to a close, though. In the excitement of the unknown, it’s easy for Matt to remember the beginnings of sharing a sport the family has loved for generations.

“It’s exciting because you don’t know what’s going to happen after (college), but also you’re back in those old times and memories. You think how much they’ve improved over the years starting back when they could barely skate,” Matt recalled.

“Everybody wants the best for him (Mason), but as long he’s being a good leader and showing good examples and playing the game straight up the way it should be, then I think we’ve succeeded in showing him what the game of hockey is all about,” Dad said.

Mason missed the second half of the 2017-18 season after he sustained an off-ice injury during winter break. The injury and rehabilitation proved to be the toughest moment of Mason’s hockey career that required support from his team at home.

“There were some pretty dark days last year when he was hurt, but we just kept saying it’s going to get better,” Matt recalled. “Day by day, it’ll get better, and before you know it, it’ll be mid-October, and you guys will be opening up the season, and you won’t even look back at what happened.”

“It’s a special feeling knowing that you have a great support system that has your back throughout your life and career,” Mason said. “It doesn’t matter if you’re having a great season or not as great a season, they always have your back and you want to play for them.”

With Mason sidelined during the most crucial part of the hockey season, the Omaha squad hurt without Mason’s leadership and skill on the ice.

“We missed him last year when he got injured. He was almost at the point where he is this year before that, so it was a big loss for us before the second half started,” Gabinet explained. “So, it’s really good to see he picked up where he left off. We’re excited for him and we’re proud of him.”

This season, Mason wears the ‘C’ for Omaha. It’s the first time he’s worn a letter, but he was the understudy of several great captains before him such as Brian Cooper, Jake Guentzel, now a Stanley Cup champion with the Pittsburgh Penguins, and Joel Messner, and credits them with making his transition to the role a bit easier.

“It’s definitely a different role, and I always try to put the team first, but at the end of the day, if everyone else is happy that’s all that matters, and you try to lead in any way you can.

I was a little comfortable with the role going into it because I had those guys in front of me and they just made it easier and showed us what they know,” Mason said.

“He’s always been such a good team guy. He gets more satisfaction out of seeing the guys on the team do well,” his proud father said. “He wants so bad to see the program do well. He’ll say, ‘I don’t want to be just another name on the wall, I want to take the team to a new level.’ And I tell him, ‘there will be some tough times along the way, but you have to relish it, enjoy it, and make the most of it.”

This weekend (Jan. 18-19), Omaha hosts the Morellis’ home-state team and Matt and Reg’s alma mater in the University of North Dakota for a pair of games at Baxter Arena. Though father and grandfather played for the team Mason is opposing this weekend, it’s probably safe to say Matt will be supporting his son and his teammates against the Fighting Hawks.

“We try to have as much fun as we can, but I tell ya, just to hang with him for a few minutes after games is a great time,” Matt admitted. “We just like to soak it all in, but these guys are busy and they’ve got a lot things going on and you just want to be there to support them no matter what.”

Lineage aside, this weekend is just another opportunity for Mason and the Mavericks to make waves.

“We have a perfect opportunity: playing Denver, North Dakota, Duluth, all those big-time teams that you love to play against because if you want to be the best you have to beat the best,” Mason said. “We’re ready to attack it and hopefully make that statement and hopefully do some big things for Omaha.”

From skating in barns and outdoor rinks with his Dad as a coach, to committing to Omaha, and now playing the best in his last college season, Mason’s career has been ‘like a flurry of good moments.’

“It’s hard to pinpoint one great moment, but I’m just grateful to get the opportunity to play at Omaha, and in the four years, it just goes quick. It really sets in when you hit senior year, and it’s been really fun, and I’m glad I got the chance to play at Omaha,” the captain reflected.

Mason plans on pursuing hockey after graduation in May and it’s likely the business administration major will take his combination of work ethic, consistency and love for the game to the next rink in which he suits up. 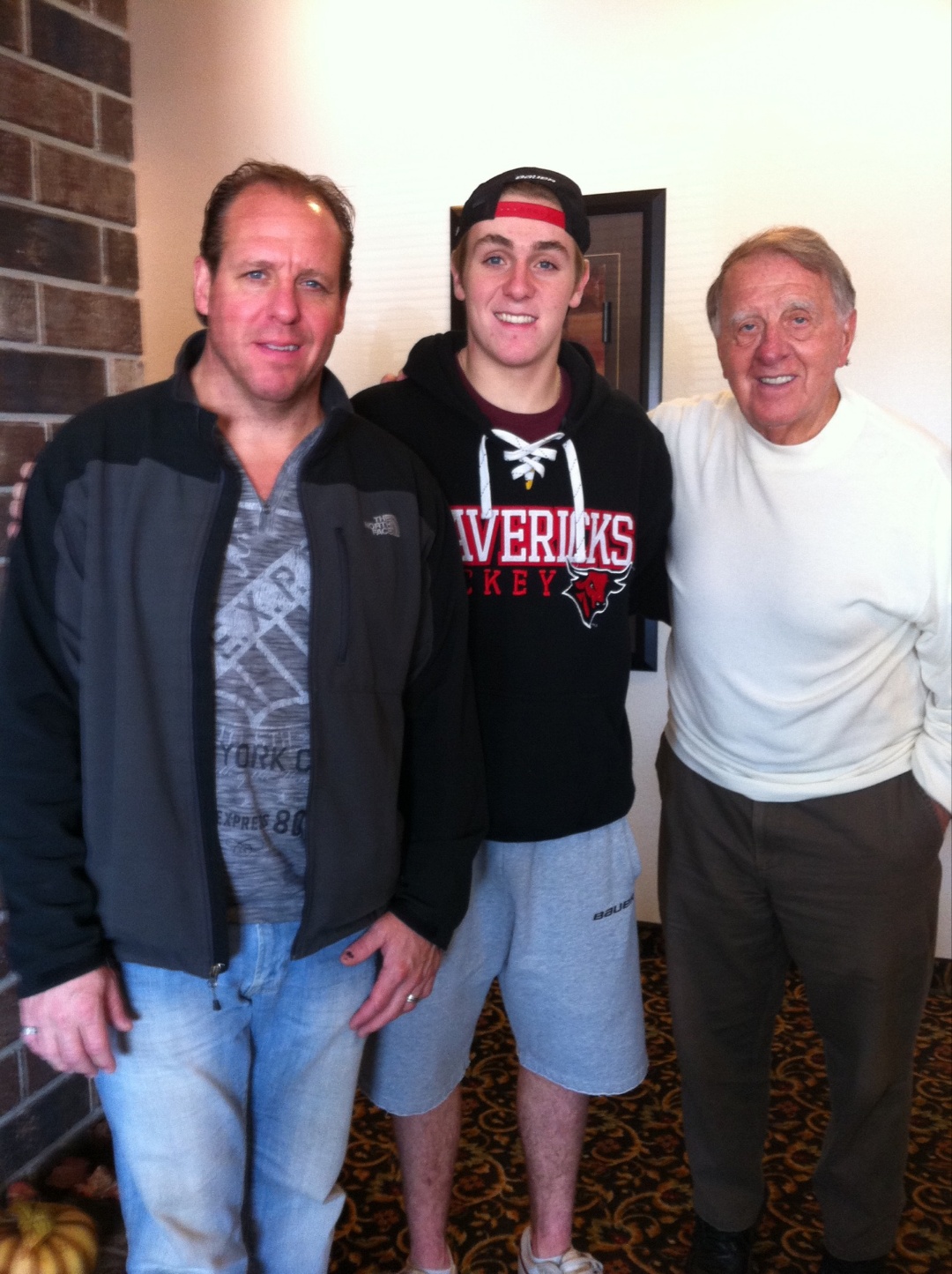 Mason with his dad, Matt, and his grandfather, Reg, both of whom played at North Dakota. 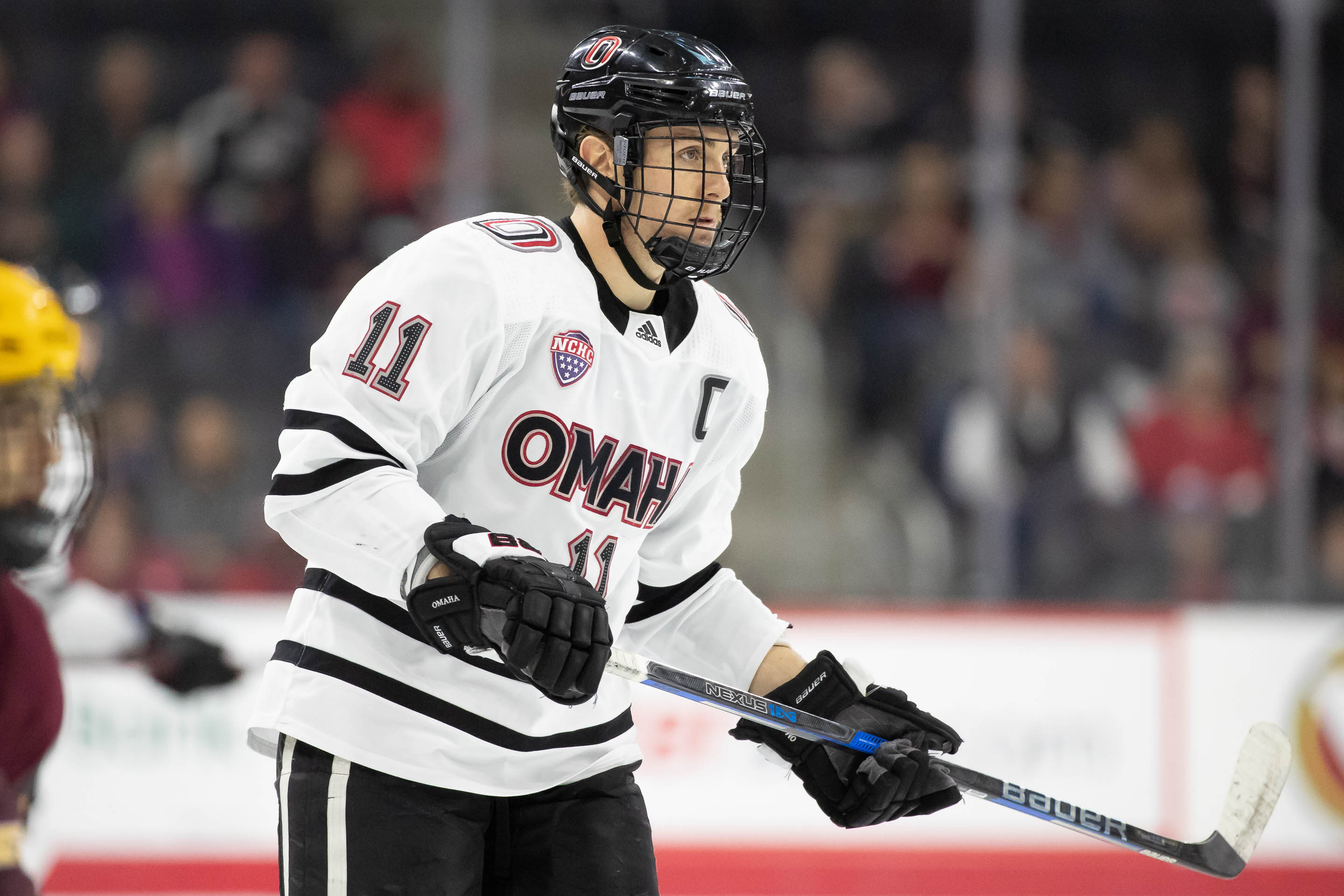 Mason Morelli, the team captain, has tallied career highs in goals and points this season.