Media select Bulldogs to finish first, Huskies to take second; UND, WMU round out top half

COLORADO SPRINGS, Colo. – Coming off a national championship last season, Minnesota Duluth has been voted by the media as the favorite to capture the 2018-19 Penrose Cup, awarded to the National Collegiate Hockey Conference (NCHC) regular-season champions, as the NCHC Preseason Poll was unveiled Monday on Twitter.

Minnesota Duluth returns 18 letterwinners from last year’s squad that finished 25-16-3 overall, third in the NCHC regular season (13-11-0-0) and made a postseason run to win the program’s second NCAA championship. UMD, which is still searching for its first Penrose Cup, brings back junior goaltender Hunter Shepard and sophomore defenseman Scott Perunovich, who were both All-NCHC performers last season.

A total of 27 ballots were submitted by local media members from each school, as well as select national media. Points were awarded on a descending scale with a first-place vote worth eight points, a second-place vote worth seven points and so on.

NCHC Media Day will take place tomorrow, Tuesday, Sept. 25 at Xcel Energy Center in Saint Paul, Minn., the home of the NCHC Frozen Faceoff. Fans can take part in 2018 NCHC Media Day by asking questions during the Twitter Takeovers, watching Facebook LIVE interviews, and following along on NCHC.tv and the NCHC’s Media Day Blog. Before Media Day begins, the 2018-19 NCHC Preseason All-Conference Team will be announced on Tuesday morning.

While Media Day serves as the unofficial start of the 2018-19 season, the NCHC officially drops the puck on season six on Saturday, Oct. 6 with three non-conference contests and a trio of exhibition games. On Sunday, Oct. 7, the three non-conference series conclude, while the remaining two NCHC teams host exhibitions. Fans can watch all the exciting NCHC action on NCHC.tv, where more than 145 games will be streamed live during the season. To subscribe to NCHC.tv, click here. 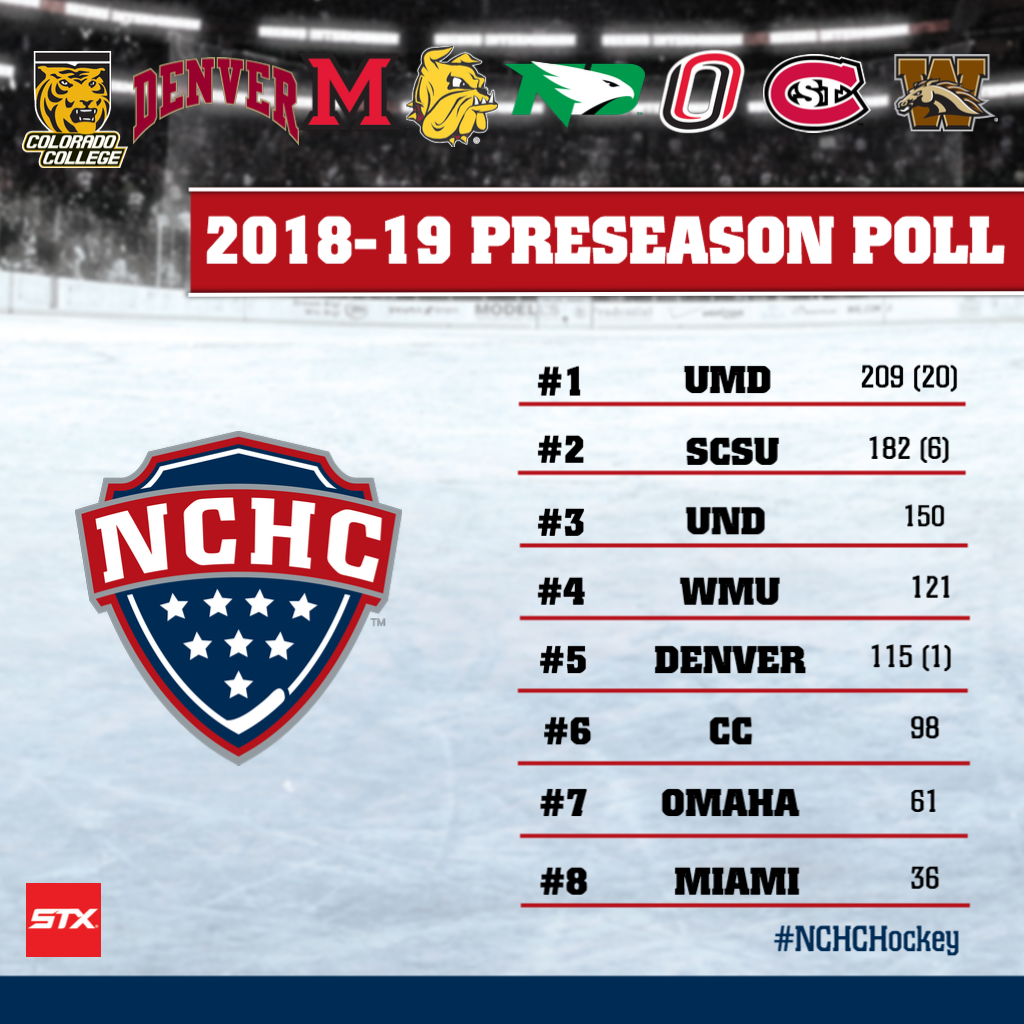