DALLAS – After North Dakota incoming freshman Jacob Bernard-Docker was selected in the first round on Friday night, fifteen more current or future National Collegiate Hockey Conference (NCHC) student-athletes were chosen on Saturday during the second and final day of the 2018 National Hockey League (NHL) Entry Draft, held at the American Airlines Center, home of the Dallas Stars. Of the fifteen day two selections, three played in the NCHC last season, 11 are incoming freshmen and one has signed a National Letter of Intent to play in 2019-20. The sixteen overall NCHC draft picks tie with 2016 for the most in one NHL Draft in the conference’s short history.

North Dakota led all NCHC teams with four total selections, all incoming freshmen, while Denver saw three incoming rookies taken in the draft. Western Michigan also had three student-athletes chosen, including rising junior Hugh McGing and two incoming freshmen. Minnesota Duluth and St. Cloud State each had a rising sophomore, Scott Perunovich and David Hrenak, respectively, and an incoming freshman drafted, while Miami had one incoming freshman go in the draft, as well. Colorado College was the seventh NCHC team to see a player chosen, with a commit for 2019-20 taken.

Of the 16 draft picks, 10 are forwards, five are defensemen and Hrenak is the lone goaltender. Ottawa chose three incoming NCHC freshmen, including two from North Dakota, while St. Louis drafted both Perunovich and McGing, and Vegas took a pair of incoming NCHC rookies. Behind Bernard-Docker, three NCHC skaters went in the second round, including Perunovich, while four went in the fourth round. McGing and Hrenak both went in round five, while three picks each came in the sixth and seventh rounds.

The first pick of day two of the NHL Draft was Western Michigan incoming freshman defenseman Mattias Samuelsson (Voorhees, N.J.), who went 32nd overall (1st in round two) to the Buffalo Sabres, marking the second-highest draft pick in Bronco history. Samuelsson recently captained USA's U-18 Team to a silver medal at the 2018 IIHF Under-18 World Championship, scoring a goal and tallying an assist. In all competitions with the USA Hockey National Team Development Program (NTDP) and the U-18 Team, the 6-foot-4 defenseman played in 88 games, scoring 16 goals and adding 31 assists for 47 points. He was also recently named to Team USA's roster for the 2018 World Junior Summer Showcase in Kamloops, B.C. July 28-Aug. 4.

Joining Samuelsson at the World Junior Summer Showcase and in Kalamazoo in the fall is WMU incoming forward Paul Cotter (Canton, Mich.), who went 115th overall in the fourth round to the Vegas Golden Knights. The 6-foot left-shot center spent last season with the Lincoln Stars of the United States Hockey League (USHL). Cotter posted 39 points on 18 goals and 21 assists in his first season in the USHL. Cotter’s future teammate, McGing (Chicago, Ill.), was the final Bronco drafted, going 138th overall to the St. Louis Blues in the fifth round. As a sophomore, McGing posted career bests of nine goals, 21 assists and 30 points, and has 52 points (17g, 35a) in 75 career games with the Broncos.

Perunovich (Hibbing, Minn.), the 2017-18 NCHC Rookie of the Year, was drafted 45th overall midway through the second round also by the St. Louis Blues. The Tim Taylor Award winner as college hockey’s national Rookie of the Year was also an AHCA First-Team West All-American and took home NCHC Offensive Defenseman of the Year honors as a freshman. Perunovich was also a First-Team All-NCHC pick and a unanimous NCHC All-Rookie Team selection after leading UMD with a team-best 36 points and 25 assists from the blue line in 42 games, while leading the Bulldogs to the 2018 NCAA national championship.

The second Bulldog drafted Saturday was incoming forward Cole Koepke (Hermantown, Minn.), who was chosen 183rd overall in the sixth round by the Tampa Bay Lightning. Koepke spent the last two seasons with the Sioux City Musketeers in the USHL, including serving as an assistant captain last year when he tallied 28 goals and 11 assists for 39 points in 60 games.

Weatherby went 102nd overall in the fourth round to the San Jose Sharks. He spent the past two seasons with the Wenatchee Wild of the BCHL, earning the BCHL’s Most Valuable Player and BCHL All-Star First Team accolades this past season after leading the league in scoring during both the regular season (58 GP, 37-37—74) and playoffs (20 GP, 15-23—38). Weatherby was named the RBC Cup’s top forward after scoring three goals and five assists in five tournament games. Hain was drafted 174th overall in the sixth round by the Philadelphia Flyers, who are coached by former UND head coach Dave Hakstol. Hain spent the 2017-18 season with the U.S. NTDP and registered 11 goals and 20 assists in 53 games. The 6-foot, 196-pound Hain won a silver medal at the 2018 Under-18 World Championship.

Miami incoming freshman forward Jonathan Gruden (Rochester Hills, Mich.) went 95th overall to Ottawa in the fourth round as the Senators third NCHC selection. Gruden played his junior hockey with the U.S. NTDP for the past two seasons. With the Under-18 Team this past season, Gruden notched 60 points (28g, 32a) in 61 games and also served as an alternate captain for Team USA during the U-18 World Championship, where he dished out four assists in seven games and earned a silver medal along with UND’s Hain and WMU’s Samuelsson.

Four picks after Gruden, Denver incoming freshman defenseman Slava Demin (Cypress, Calif.) was drafted 99th overall by the Vegas Golden Knights, the first of three incoming Pioneers taken. Demin posted 45 points (9g, 36a) in 57 games with the Wenatchee Wild of the BCHL this past season. He participated in the 2017 CCM/USA Hockey All-American Prospects Game, as well. In the sixth round, Emilio Pettersen (Manglerud, Norway) was selected 167th overall by the Calgary Flames. The incoming Denver forward notched 46 points (14g, 32a) in 60 games with the Muskegon Lumberjacks of the USHL during the 2017-2018 season and compiled 73 points (24g, 49a) in 117 career USHL games. Pettersen participated in the 2016 and 2017 IIHF U-18 World Championship – Division I, leading the 2017 tournament with 12 points in five games. The third Pioneer drafted was forward Brett Stapley (Campbell River, B.C.), who was taken 190th overall in the seventh round by the Montreal Canadiens. Stapley recorded 59 points (27g, 32a) in 52 games with the Vernon Vipers of the BCHL a season ago, and logged 121 points (47g, 74a) in 154 career BCHL games.

Hrenak (Povazska Bystrica, Slovakia) was drafted 144th overall in the fifth round by the Los Angeles Kings. As a freshman at St. Cloud State last season, he started 23 games in goal and appeared in 25, posting a 14-7-2 record with three shutouts, a .919 save percentage and a 2.11 goals-against average. He earned NCHC All-Rookie Team honors along with Perunovich. The second Husky to go in the draft was incoming freshman forward Sam Hentges (Fridley, Minn.), who was selected by his hometown Minnesota Wild with the 210th overall pick in the seventh round. Hentges prepped at Totino-Grace High School and went on to play junior hockey in the USHL at Des Moines and Tri-City in 2017-18.  He scored eight goals and added 10 assists in 23 games played in the USHL this past season.

Colorado College committed forward Josiah Slavin (Erie, Colo.), who signed his NLI in April and will suit up for the Tigers in 2019-20, was drafted 193rd overall in the seventh round by the Chicago Blackhawks. Slavin, the younger brother of former CC great and current Carolina Hurricane defenseman Jaccob Slavin, finished second on the USHL's Lincoln Stars with 42 points (23g, 19a) in 60 games in 2017-18. He will serve as captain of the Stars next season before joining the Tigers.

In all, 67 current or committed NCAA players were drafted in the 2018 NHL Draft, the most since 2007. The NCHC trailed only Hockey East (21) in terms of total players drafted among NCAA hockey conferences. 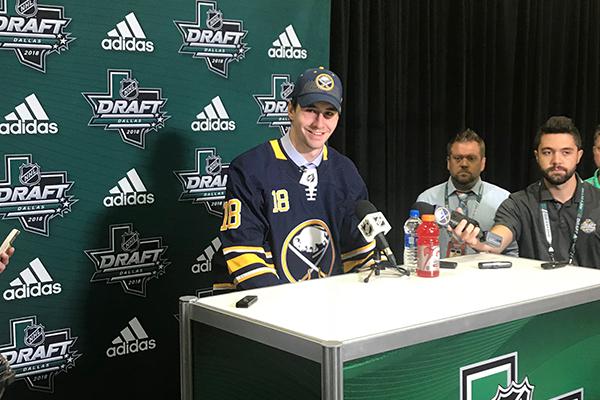 WMU incoming defenseman Mattias Samuelsson was taken with the first pick on day two, 32nd overall to the Buffalo Sabres. 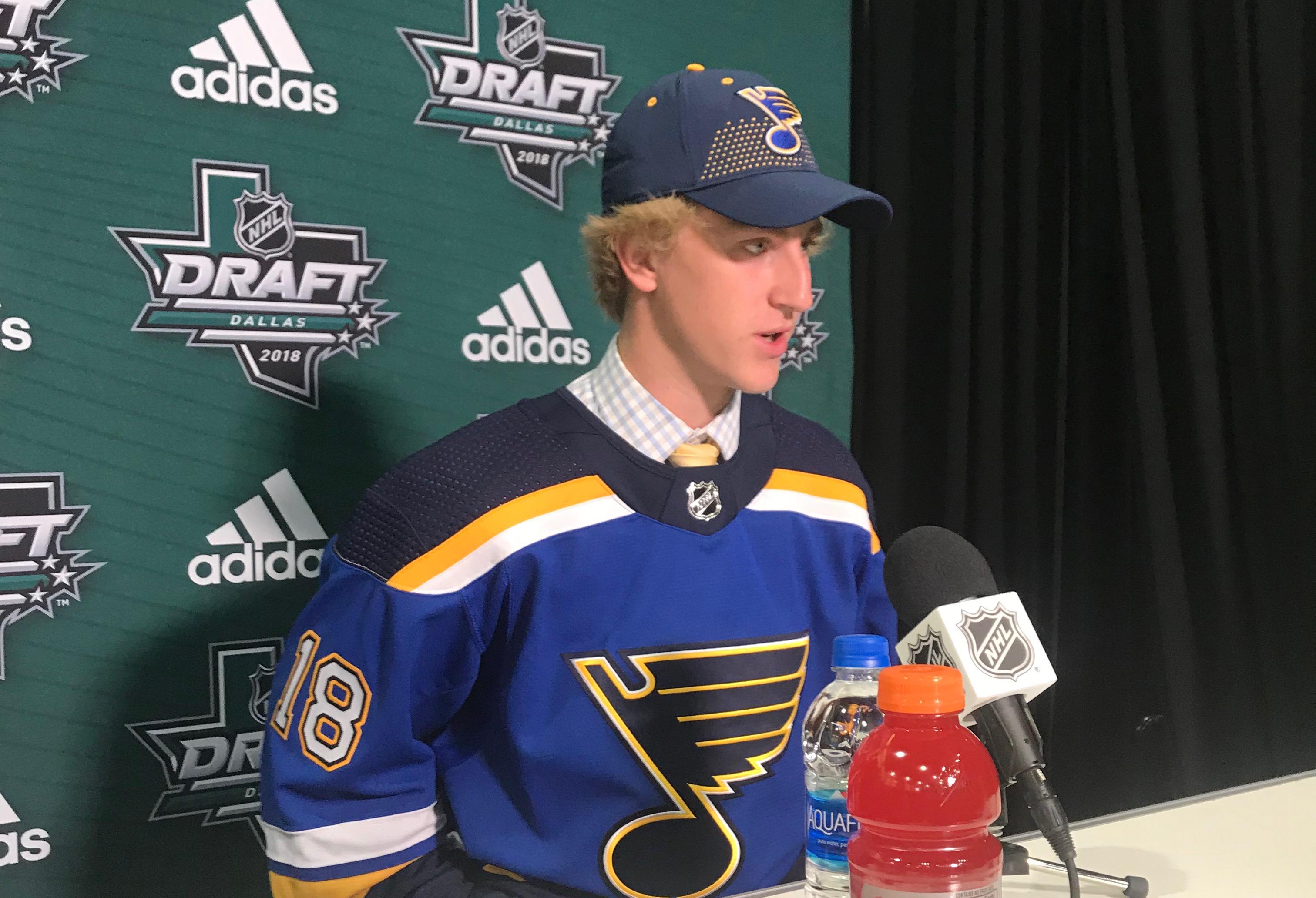 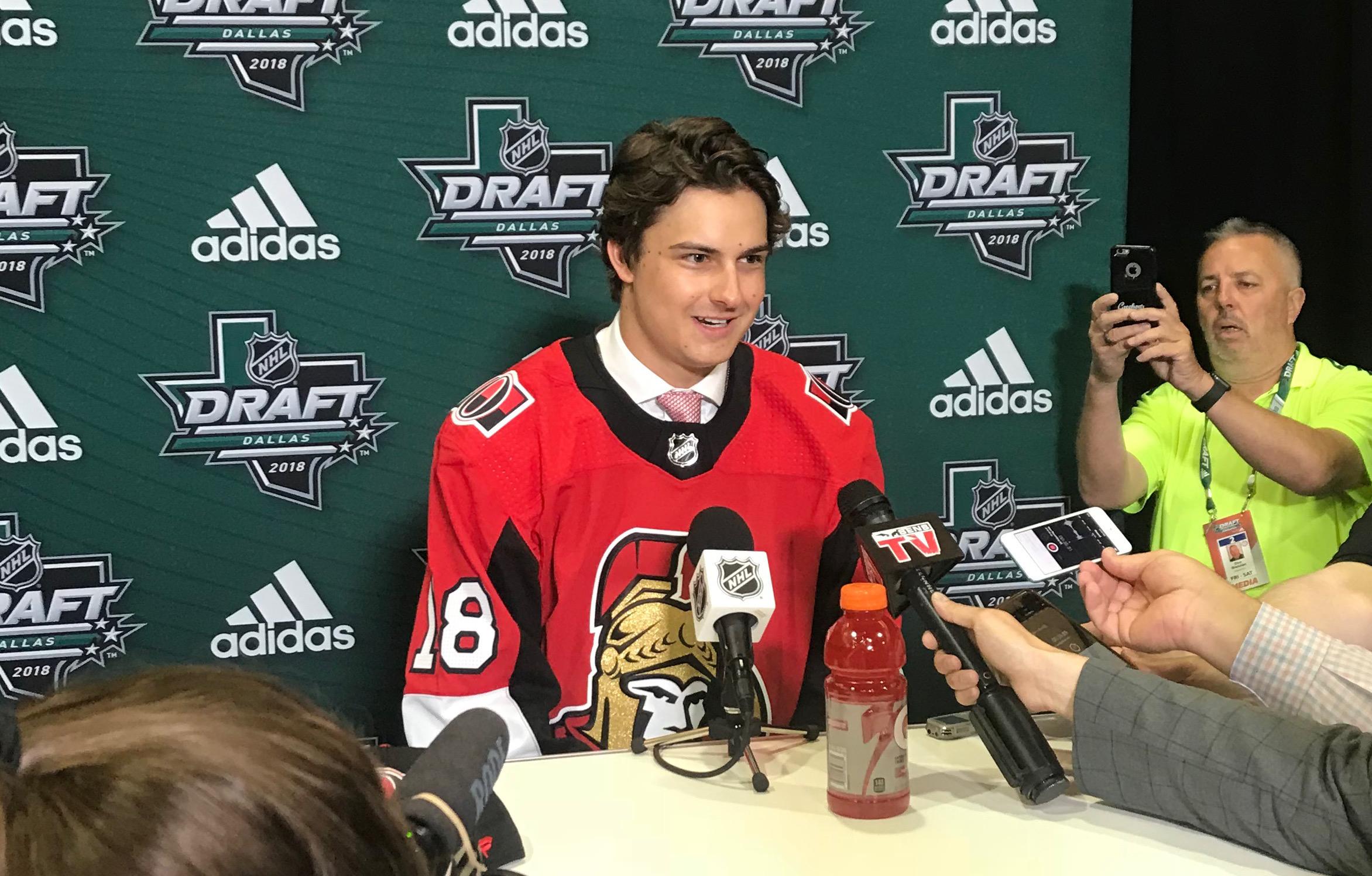 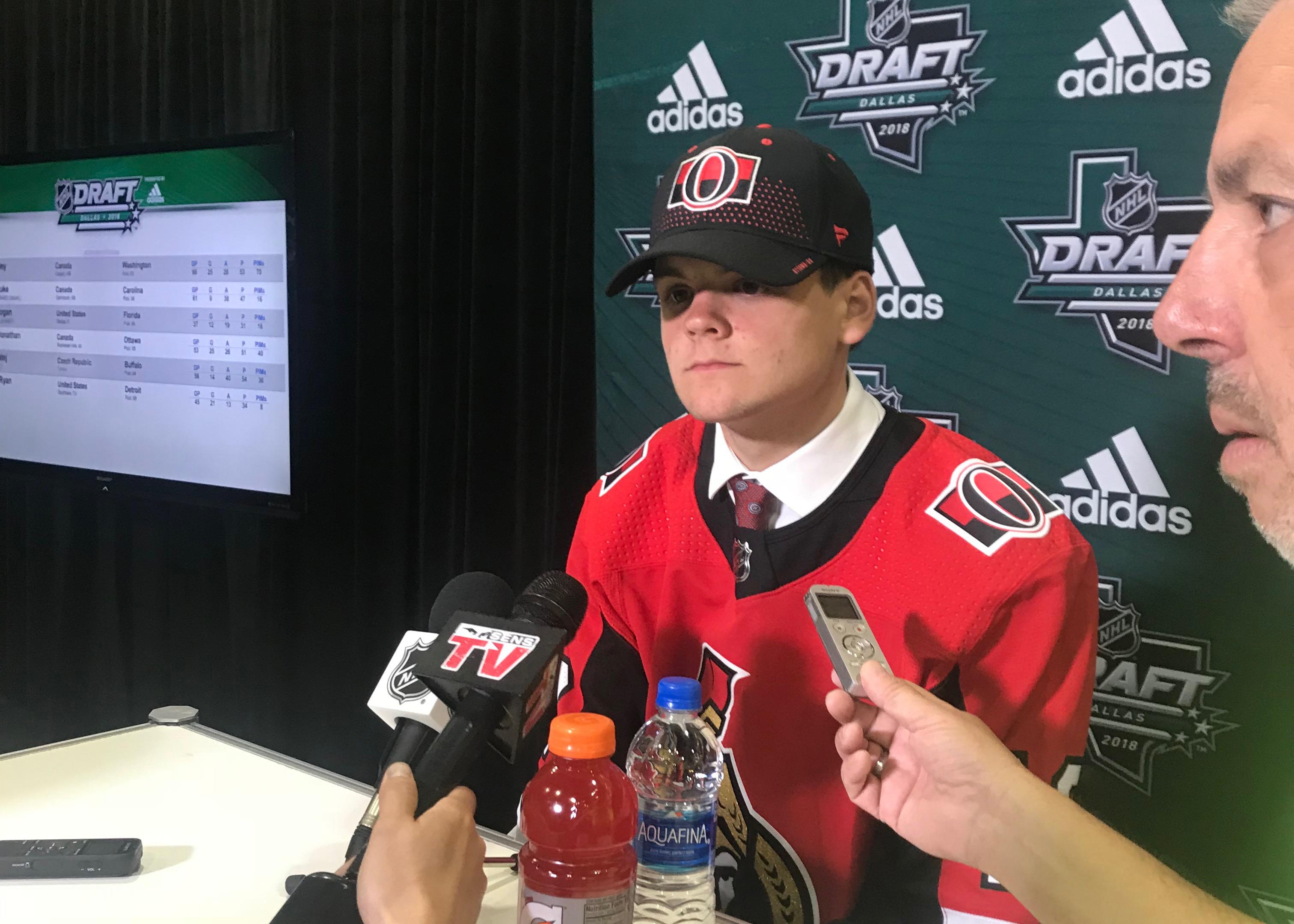 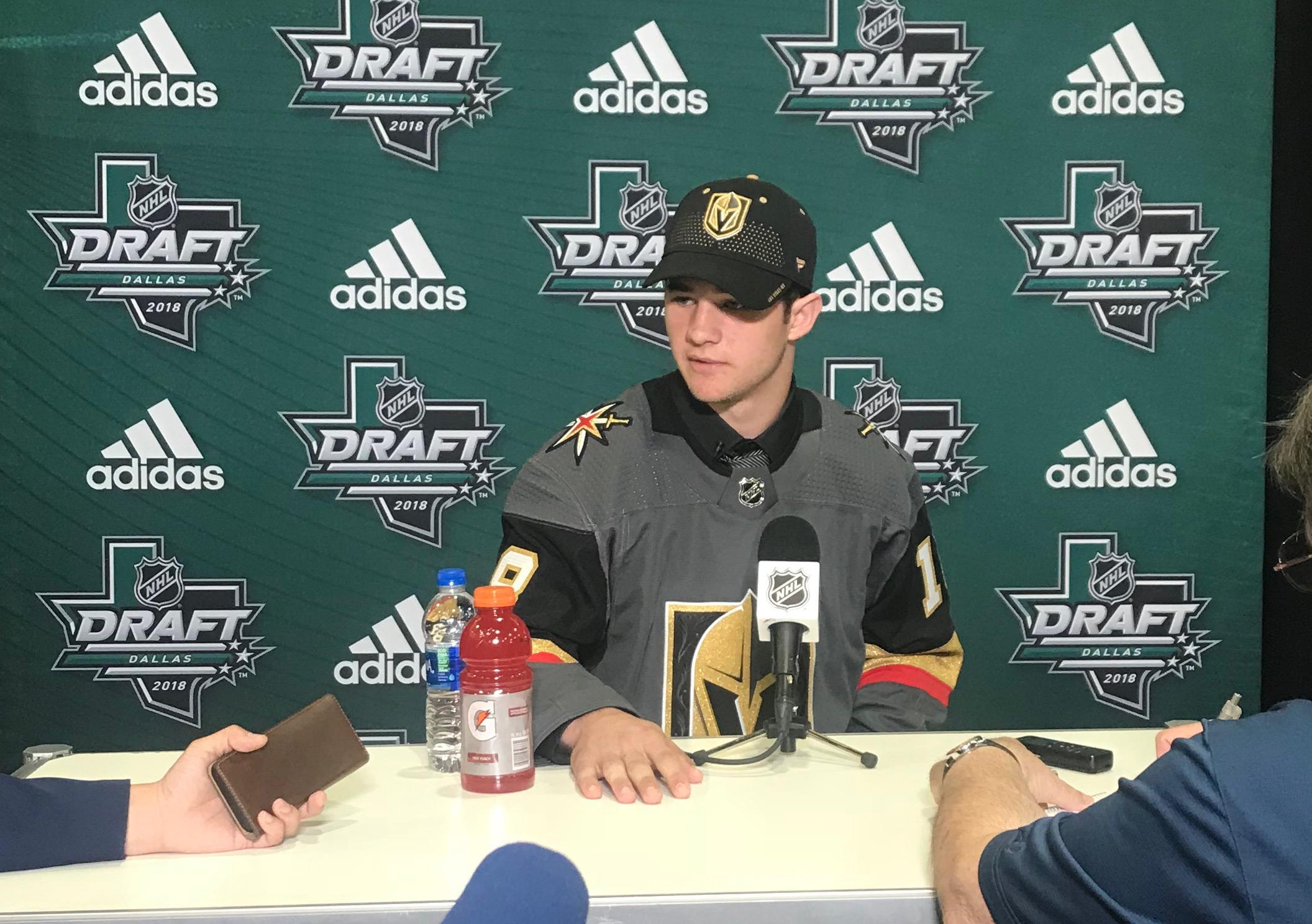 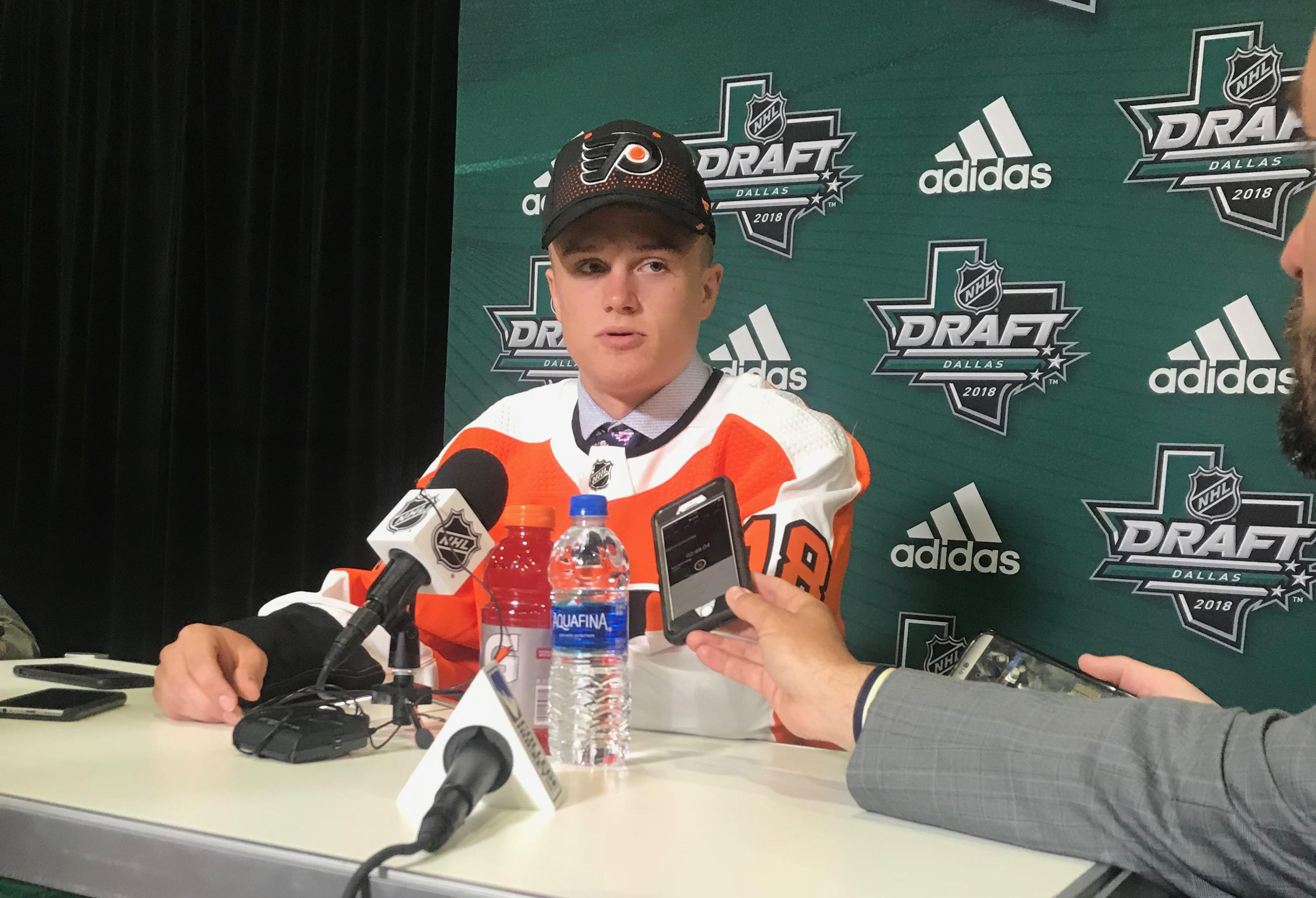