Recapping the conference’s fifth season, along with a “Focus on the Future”

COLORADO SPRINGS, Colo. – With the 2017-18 season complete, the National Collegiate Hockey Conference (NCHC) reflected on its fifth season of competition, looking back at the successes, changes from previous seasons and how the NCHC can continue to build upon what’s already been accomplished. Highlighting the 2017-18 NCHC season was a third straight national championship, a new home for the Frozen Faceoff, a relaunched digital network (NCHC.tv) and the addition of mobile apps for NCHC.tv, along with continued strong operating results.

The NCHC held its annual Board of Directors Meeting with member Presidents and Chancellors on Thursday, May 17 in Colorado Springs, after holding the conference’s Annual Meeting with Athletics Directors, Faculty Athletics Representatives (FARs) and coaches in Naples, Fla. on April 23-24. Both meetings covered a variety of topics, including a review of last season, as well as possible changes for the future.

“The continued success of the NCHC is reflective of the commitment our eight member institutions have toward Division I hockey at the highest level,” NCHC Commissioner Josh Fenton said. “The 2017-18 season was arguably our best yet and we are even more excited about what our future may hold.”

COMPETITION
As has been the case the past few years, the NCHC had incredible success on the ice in 2017-18, as both teams and individuals flourished.

ACADEMICS
While the NCHC has had tremendous success on the ice, it’s also proud of the accomplishments of the student-athletes in the classroom.

FISCAL OPERATIONS
Having generated a surplus in each of the conference’s first four seasons, the NCHC is expecting one of its best years financially. The NCHC has been able to sustain a healthy financial model thanks to appropriate budgeting, efficient spending, growing existing revenue streams and creating new revenue opportunities. After five years of operations and building reserve assets, the conference expects to make a distribution back to the membership following completion of fiscal year 2018. The anticipated distribution is separate from any NCHC.tv allocations, which have been made consistently over the past four years. Among the factors that contributed to the NCHC’s financial success in 2017-18 are: NCHC Tournament (Quarterfinal and Frozen Faceoff rounds), conference sponsorships and NCHC.tv.

FROZEN FACEOFF
The biggest change in the NCHC in 2017-18 was the host of the conference’s championship weekend, as the NCHC moved from Target Center in Minneapolis to Xcel Energy Center in Saint Paul. The 2018 Frozen Faceoff served as the first of a five-year contract, which was announced last September, with the home of the NHL’s Minnesota Wild, and allowed for an outstanding fan, student-athlete and media experience. In addition, the conference also established a new partnership with Visit Saint Paul, the city’s convention & visitors bureau, to help with promotion of the Frozen Faceoff, Fan Fest and fan engagement in the city.

FAN ENGAGEMENT
While the NCHC Frozen Faceoff is certainly the showcase event for the conference, engaging with fans throughout the season and promoting the conference’s successes is also a big priority. Whether its through the NCHC’s website, digital network (NCHC.tv), television, social media or other mediums, fans have plenty of ways to engage and follow the conference, while the NCHC also expands its brand to a more national audience. And with several enhancements and additions made to NCHC.tv and on social media, NCHC fans now have an even better experience when watching and following games during the season.

OFFICIATING
The NCHC continued its focus on education, communication and supervision with the Officiating Program.

CONFERENCE GOVERNANCE
While most fans do not think about the behind the scenes organization of the conference, there are several documents, committees and governance structures to run the conference and outline operations. The governing documents are updated each offseason with policy and rule changes, while the leadership of various Boards, Councils and committees changes.

FOCUS ON THE FUTURE

After another successful season in the books, the NCHC is focused on continued improvement as we approach the 2018-19 season. During the NCHC’s 2018 Annual Meetings in Naples, Fla. and Colorado Springs, Colo., many topics were discussed with some changes finalized. In addition, the conference will review its strategic plan, while taking into consideration feedback from fans, coaches, student-athletes and administrators. As always, most changes will be rooted in improving the fan and student-athlete experience.

As the National Collegiate Hockey Conference looks forward to 2018-19, the conference would like to thank all its fans for their support and passion during the NCHC’s fifth season. Without all the fans’ support, the conference would not be as strong as it is in only five short years. The feedback provided by fans is very valuable and helps steer our focus for improvements and changes going forward. As we head into the summer, we encourage fans to stay involved on social media and visit NCHCHockey.com and NCHC.tv (or download the mobile app). While preparing for the 2018-19 campaign, the NCHC hopes to create an even better fan and student-athlete experience next season. We can’t wait to see all our fans and student-athletes back in their arenas come October as we drop the puck on season number six! 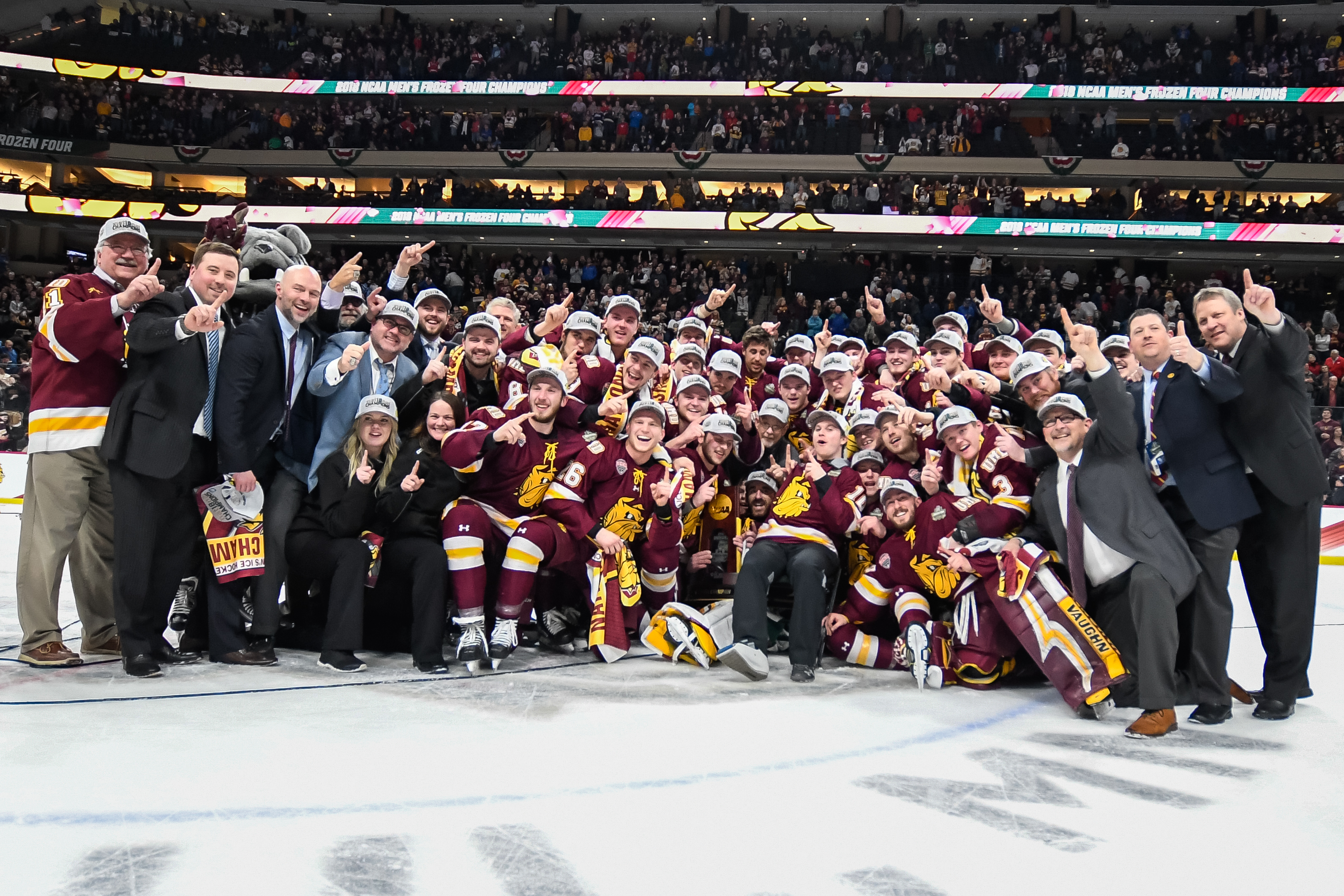 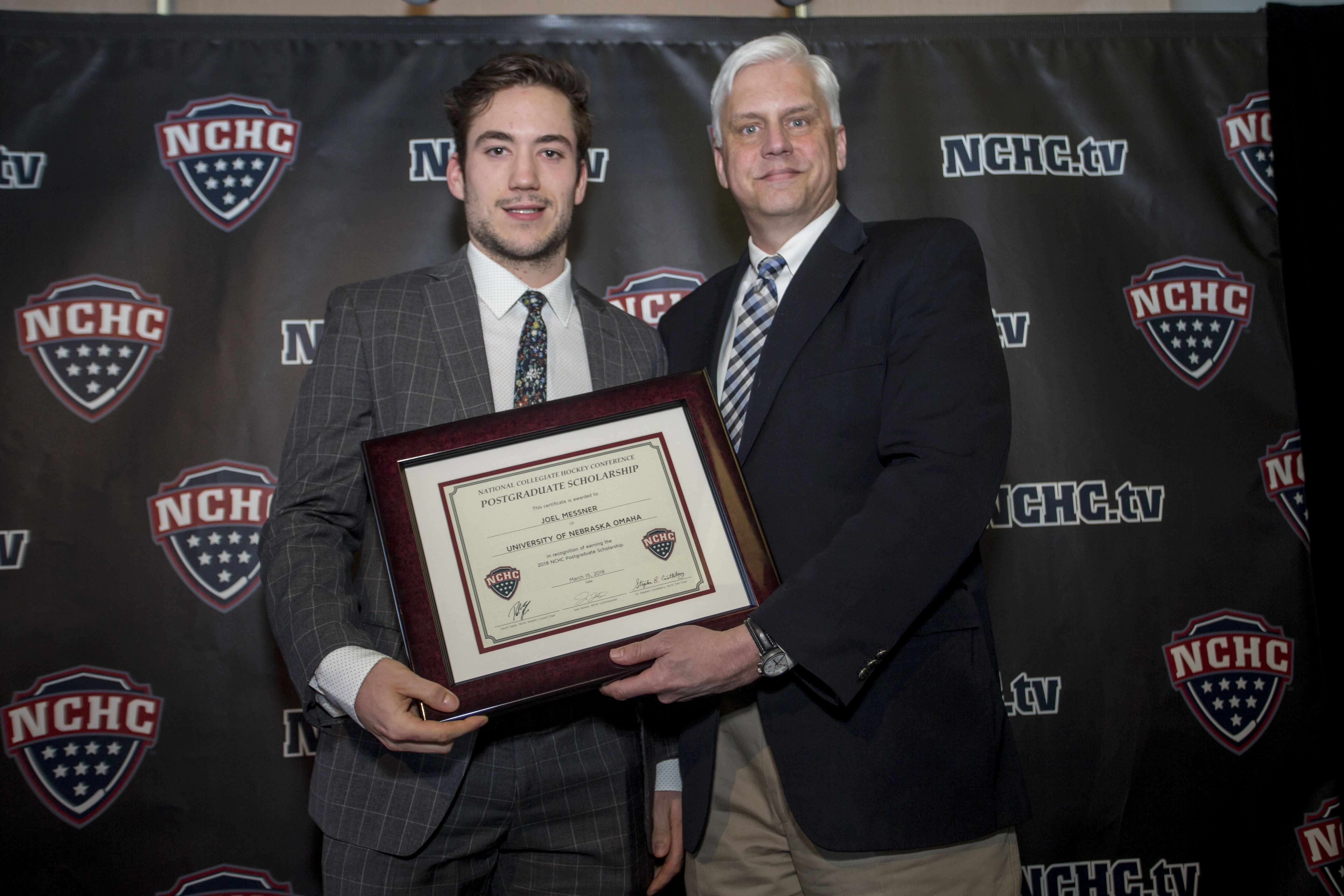 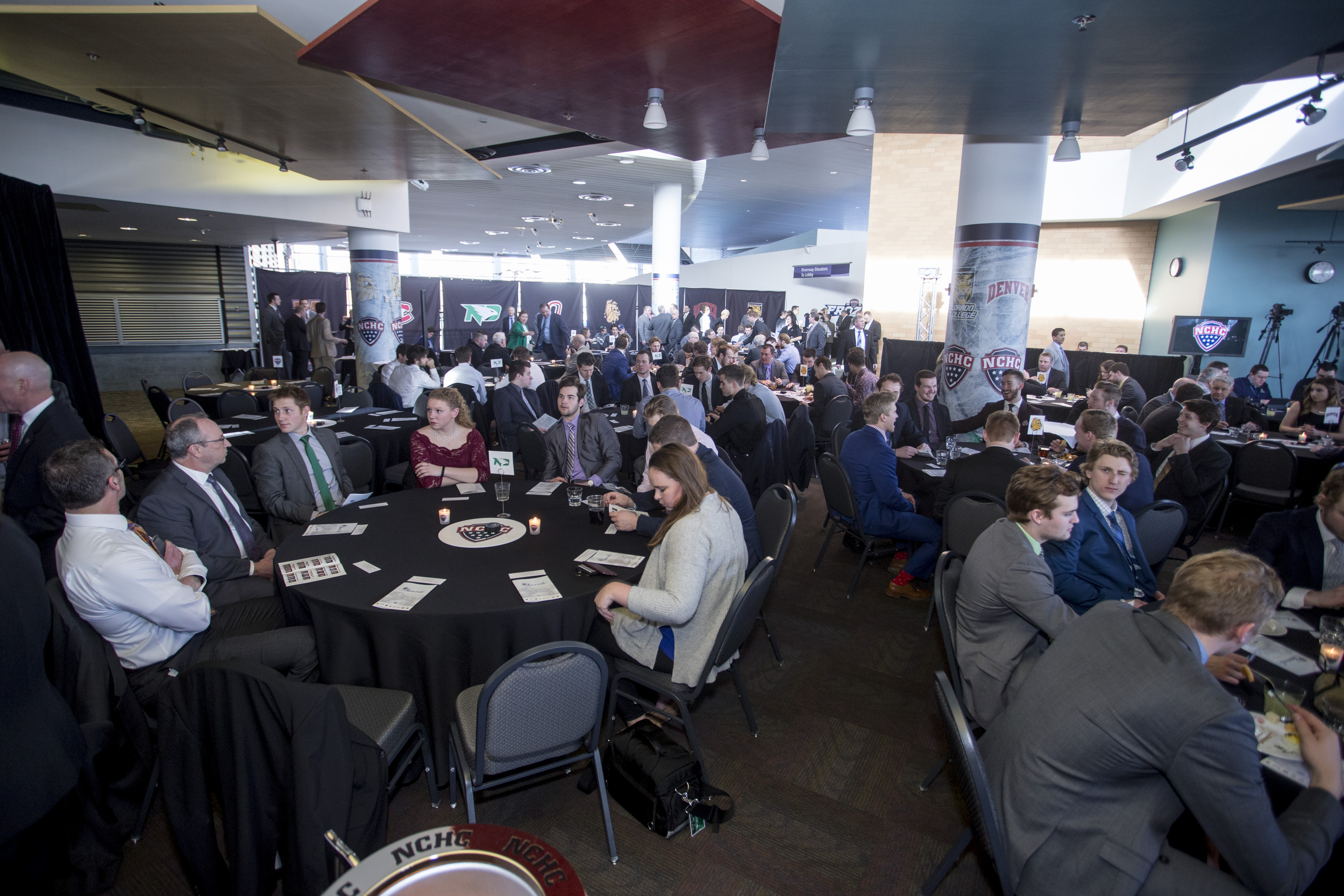 The NCHC Awards Celebration was held at the Science Museum of Minnesota in Saint Paul in 2018. Photo by Bruce Kluckhohn 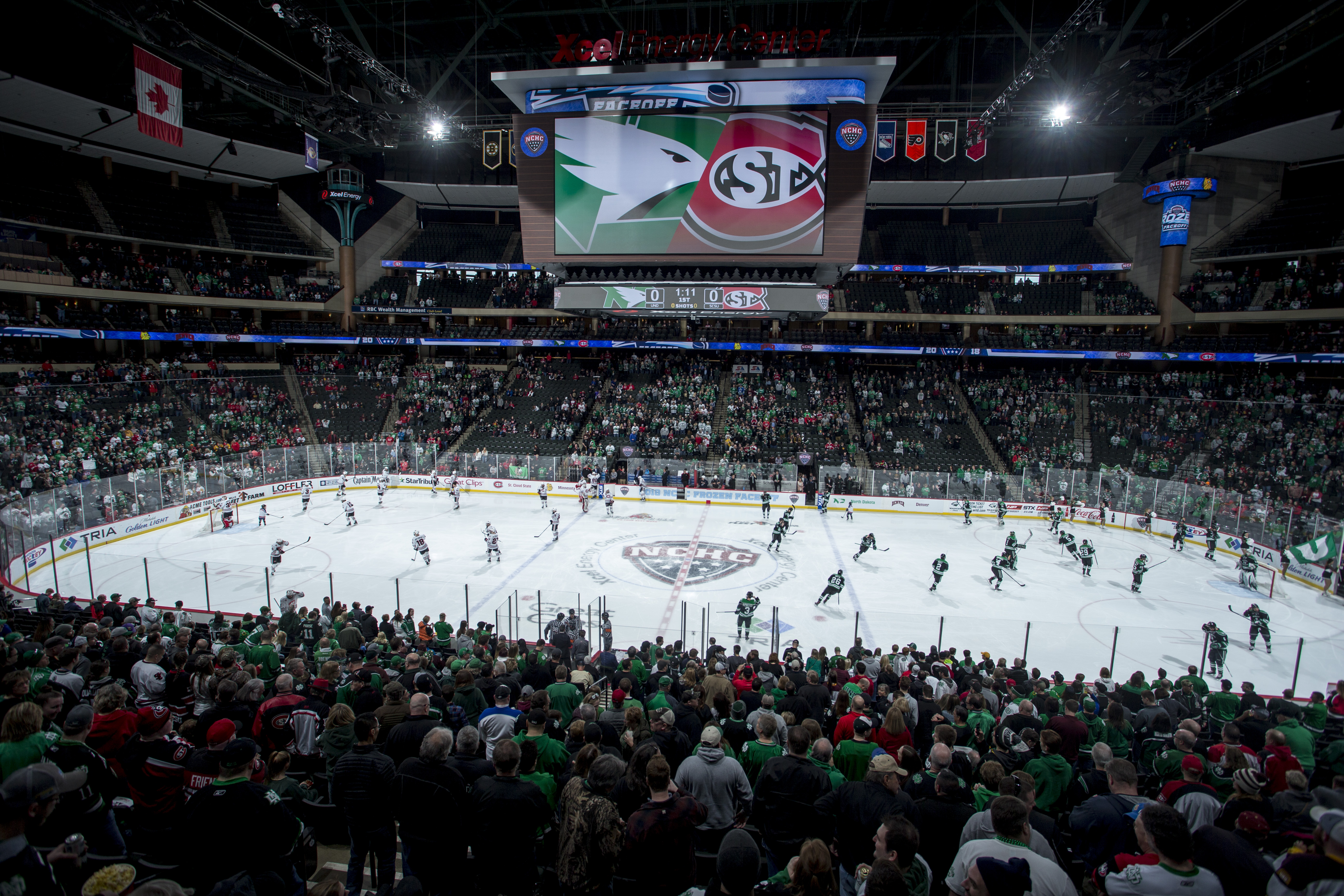 The Frozen Faceoff was held at Xcel Energy Center in Saint Paul for the the first time in 2018. Photo by Bruce Kluckhohn 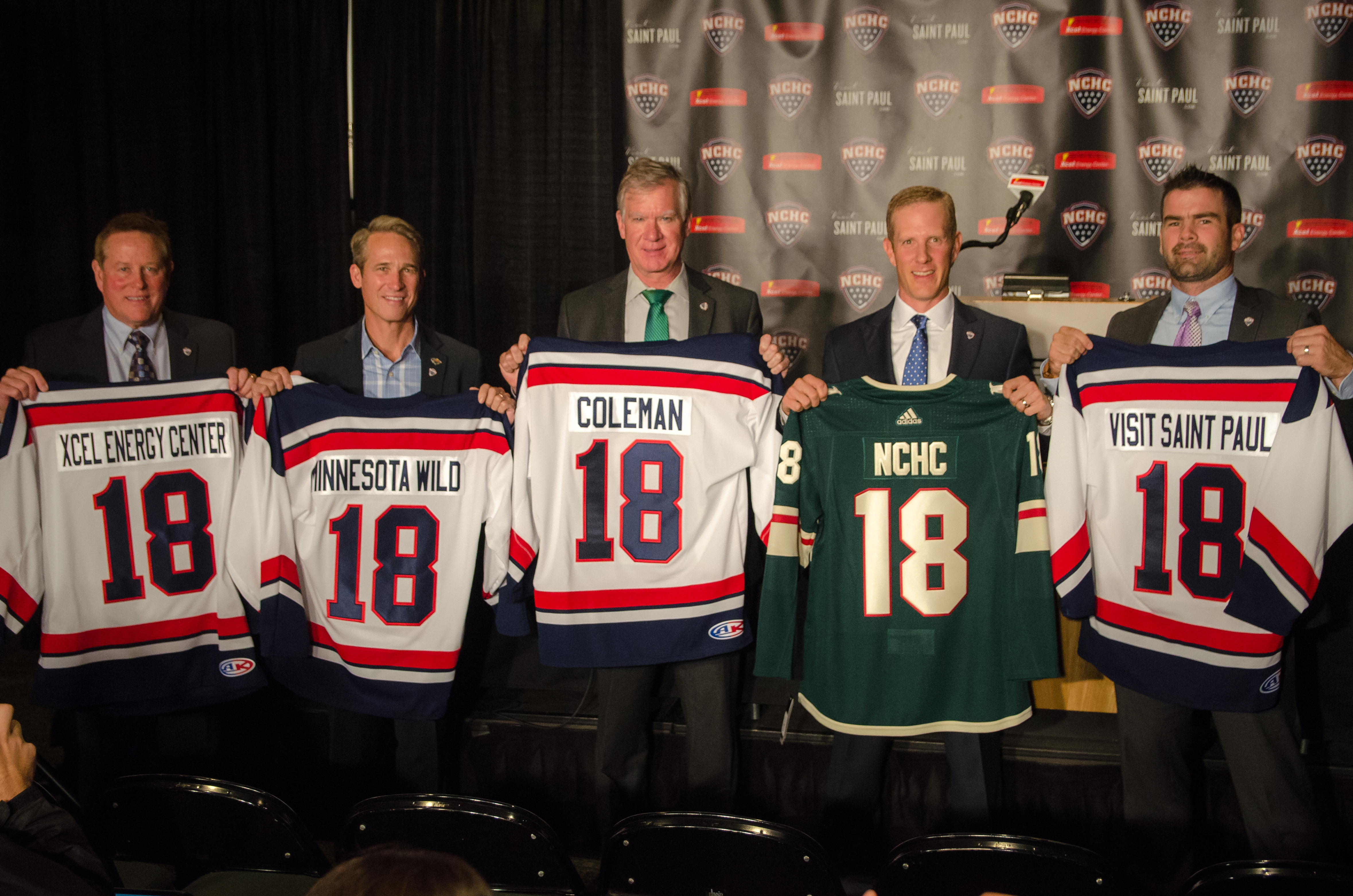 The NCHC was officially welcomed to its new home for the Frozen Faceoff, Xcel Energy Center, on Sept. 20, 2017. Photo by Maddie MacFarlane 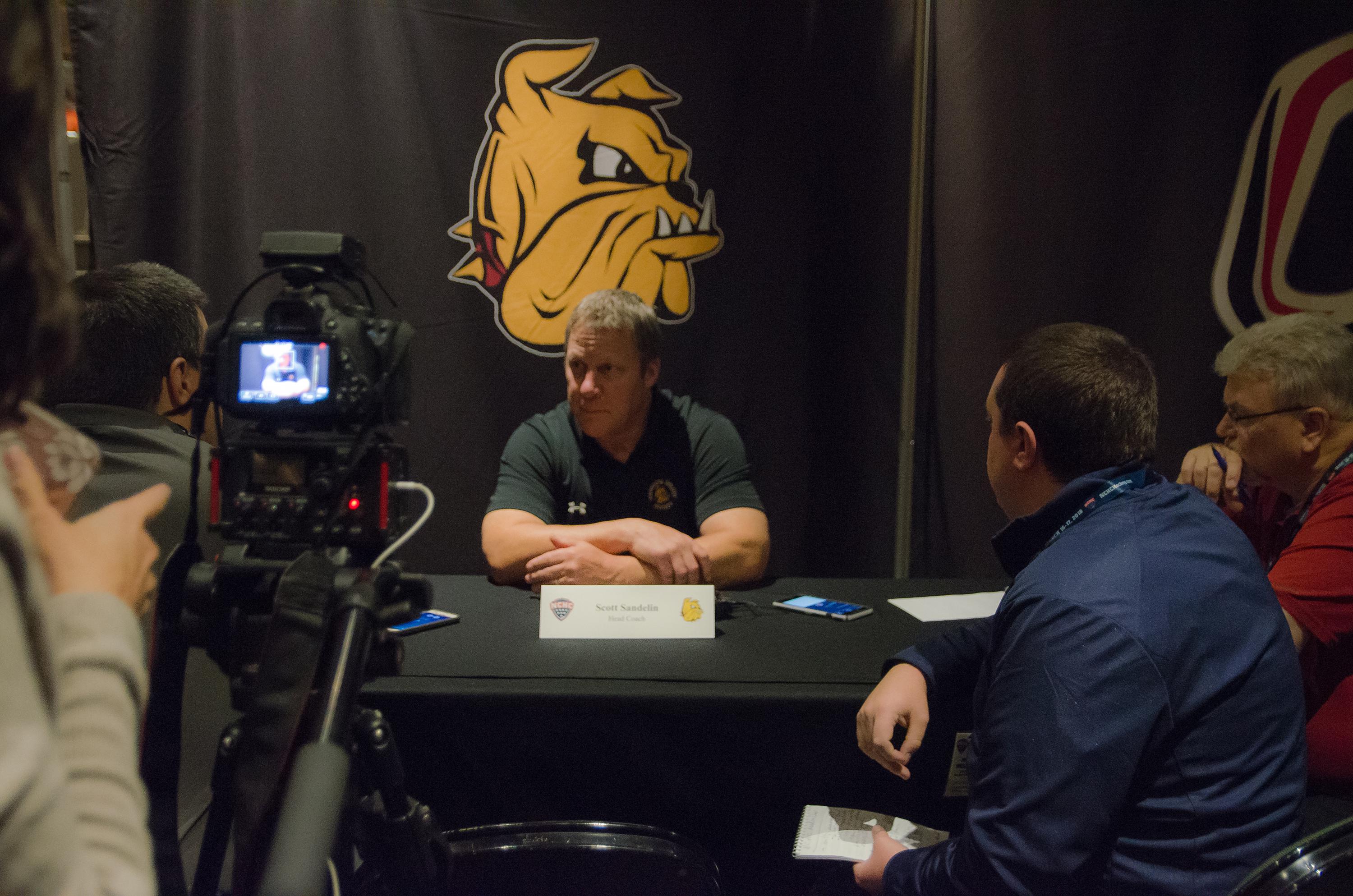