COPENHAGEN, Denmark – Five former National Collegiate Hockey Conference (NCHC) players are returning to the United States with some hardware in hand after helping Team USA capture the bronze medal at the 2018 International Ice Hockey Federation (IIHF) Men’s World Championship on Sunday in Denmark. The U.S. topped rival Canada, 4-1, in the bronze-medal game to wrap up the tournament.

Butcher, now of the New Jersey Devils, and Pionk, of the New York Rangers, tied for the scoring lead among NCHC alumni on Team USA with three points each, as both blue liners played in all 10 games. Butcher potted his lone goal of the tournament May 5 in a win over host Denmark and added two assists, while Pionk tallied a pair of goals (May 11 vs. South Korea and May 13 vs. Norway) and dished out one helper. Pionk also finished tied for the team lead with a +7 plus/minus, while Butcher was +1 and averaged 20:12 time on ice per game, third-most on the team and second-most among defensemen.

Coleman, who is now teammates with Butcher in New Jersey, scored his lone goal of the tournament in the May 11 win over South Korea and also handed out an assist in the May 4 tournament-opening win over Canada. Coleman finished +3 at the World Championship and fired 22 shots on goal in the 10 games. Oesterle, who completed his first season with the Chicago Blackhawks this past year, played in the first four games for Team USA in Denmark, tallying an assist in the May 4 win over Canada and posting a +3 plus/minus from the back end. Lindgren, a member of the Montreal Canadiens organization, served as the third-string goaltender for most of the tournament, though he did dress in the May 11 win over South Korea.

Jensen, a member of the Detroit Red Wings, totaled four points with a goal May 5 against Denmark and three assists in his 10 games, posting an even plus/minus. Martinez, a stalwart with the L.A. Kings, also played in all 10 games at the World Championship, scoring his lone goal May 13 against Norway and handing out two helpers May 11 against South Korea. Martinez logged a +2 plus/minus and averaged 20:08 time on ice per game, which was fourth on Team USA.

Team USA was led by head coach Jeff Blashill, a former Miami assistant coach and Western Michigan head coach, who is now the head coach of the Detroit Red Wings. Team USA finished the tournament 6-2-0-2, with six regulation wins, two overtime wins and two losses. The Stars and Stripes went 4-2-0-1 in group play with its only loss coming to Finland, while the U.S. edged the Czech Republic, 3-2, in the quarterfinals May 17, before falling to eventual gold medalist Sweden in the semifinals May 19. Team USA then beat Canada for a second time in the tournament to win the bronze. It was Team USA’s first medal at the IIHF World Championship since also winning a bronze back in 2015.

Former NCHC and North Dakota forward Tyson Jost, now of the Colorado Avalanche, was on the losing end of the bronze-medal game as he appeared in nine games for Canada, after missing the opening game against the United States. Jost tied for third on the team with four goals during the tournament, while also doling out two assists for a six-point World Championship. Jost logged a +6 plus/minus in Denmark as well, tying for third on the team and tops among forwards.

Two other skaters with NCHC ties also competed in the World Championship. Former Western Michigan forward Frederik Tiffels tallied two goals in seven games for Germany, which tied him for third on the team, while averaging 14:36 time on ice per game. Current North Dakota rising junior forward Ludvig Hoff suited up in six games for his native Norway, putting two shots on goal and averaging 5:41 time on ice per game. 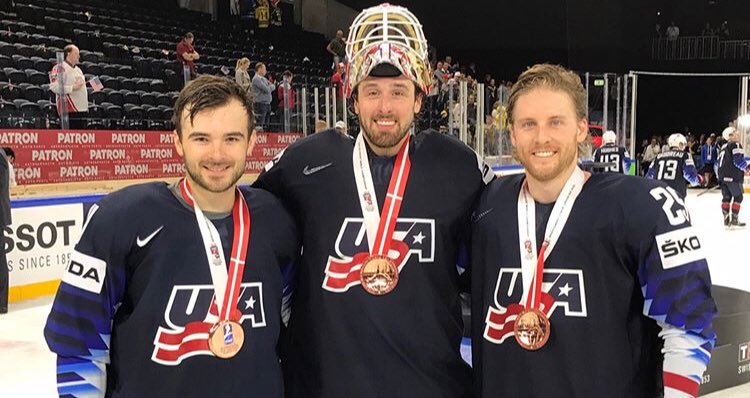 "You talk about tic-tac-toe... Wow was that pretty!" Continuing our past #NCHCHockey Plays of the Year, BOTH final… https://t.co/5rudf8ZE6X