Montgomery led Denver to a 125-57-26 record, three NCHC titles and a national title in five seasons

DALLAS – University of Denver Richard and Kitzia Goodman Head Hockey Coach Jim Montgomery has been named head coach of the Dallas Stars, the NHL team announced on Friday. The Pioneers will begin a national search for a new head coach immediately.

Montgomery leaves the University of Denver following five (5) seasons where he compiled a 125-57-26 record and led Denver to its eighth NCAA Championship in 2017. During his tenure, Montgomery led the third-most winningest program in college hockey and guided the Pioneers to back-to-back appearances in the Frozen Four as well as five-straight appearances in the NCAA Tournament. After joining the Pioneers in 2013, Montgomery reached 100 wins faster than any coach in program history.

“On behalf of the University of Denver, we appreciate everything that Jim Montgomery did at DU to continue the Pioneer hockey program’s rich tradition of excellence,” Vice Chancellor for Athletics, Recreation and Ritchie Center Operations Karlton Creech said. “We wish Jim all the best in this incredible opportunity for him and his family in Dallas, and thank him for his leadership in bringing the National Championship trophy back to Denver a year ago. We will begin a search immediately for a head coach who has the ability to continue the high standards of Denver hockey set by Jim, his staff and those before him.”

In the National Collegiate Hockey Conference (NCHC), Montgomery posted a 70-35-15-9 record to make Denver the winningest program in the five-year history of the conference. The Montreal, Quebec, native helped the Pioneers to an NCHC regular-season championship during the 2013-2014 season and a pair of NCHC Frozen Faceoff Championships in 2014 and 2018, making Denver the first two-time winner of the conference tournament. Individually, Montgomery was named a finalist for the Herb Brooks Award as NCHC Coach of the Year in both 2016 and 2017 and won the Spencer Penrose Award as National Coach of the Year in 2017.

“This was an extremely hard decision for me and my family,” Montgomery said. “I want to first thank Peg Bradley-Doppes, Ron Grahame and John Miller for bringing me to Denver and giving me the resources to have success. The dedication from our student-athletes, staff and administration has given me this opportunity to graduate to the NHL and I am very thankful and fortunate for the five years I was able to spend with this group. Additionally, the trust, guidance and support from Dan Ritchie, Chancellor Chopp, Chancellor Coombe, DU hockey alumni and the faithful fans of the program has been unparalleled. I have loved my time at Denver and have full confidence this program will continue its rich tradition of excellence. My family and I will be Pioneers forever.”

Prior to his arrival in Denver, Montgomery, 48, spent three seasons as Head Coach and General Manager for the Dubuque Fighting Saints of the United States Hockey League (USHL), winning Clark Cup championships in 2011 and 2013, Anderson Cup championships in 2011 and 2013 and GM of the Year honors in 2013. Before joining the Fighting Saints, Montgomery was an assistant coach at RPI from 2006-2010 and began his coaching career at Notre Dame in 2005-2006, serving as a volunteer coach with the Fighting Irish. As a player, Montgomery was Hockey East’s all-time leading scorer with 301 career points, won a national title during his senior season at Maine in 1993 and went on to play professionally for 12 years in the NHL, AHL, IHL, UHL, DEL and RSL. He played nine (9) games with the Dallas Stars.

“Jim made a huge difference in the style of hockey that the Pioneers have shown over the last five years,” Athletic Director Ron Grahame said. “He is very meticulous in the way he organizes and teaches the systems that he wants to utilize. Jim’s team-first mentality has been a significant part of our success at Denver during his tenure, especially in the National Championship season in 2017. I think Jim will do a great job in Dallas. He challenges his players to respect the game, holds the athletes accountable and is very clear and concise in communicating his system in the context of the game to his players, which will translate well to his new job in the NHL.”

Montgomery was the eighth head coach in the history of the program.

“We wish Coach Montgomery every success in this exciting next step of his career,” Chancellor Rebecca Chopp said. “Our accomplishments under his leadership position us well to attract the best coaching talent in the country—and I have no doubt Denver will remain a powerhouse in the years ahead.”

“When we hired Monty, we knew we were brining someone special into our DU family,” former Vice Chancellor for Athletics, Recreation and Ritchie Center Operations Peg Bradley-Doppes said. “Not only did he contribute his coaching expertise and leadership, as well as his passion that we all love, but he also gave us his heart. We’re a better program because of it, and Monty will always be a part of the Pioneers family.” 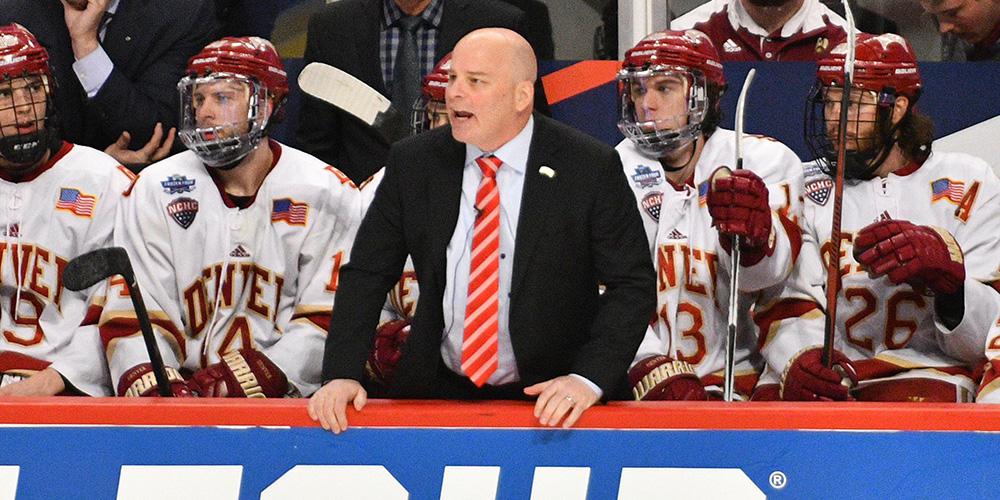 Jim Montgomery at the 2017 NCAA Frozen Four where he led Denver to a national title. 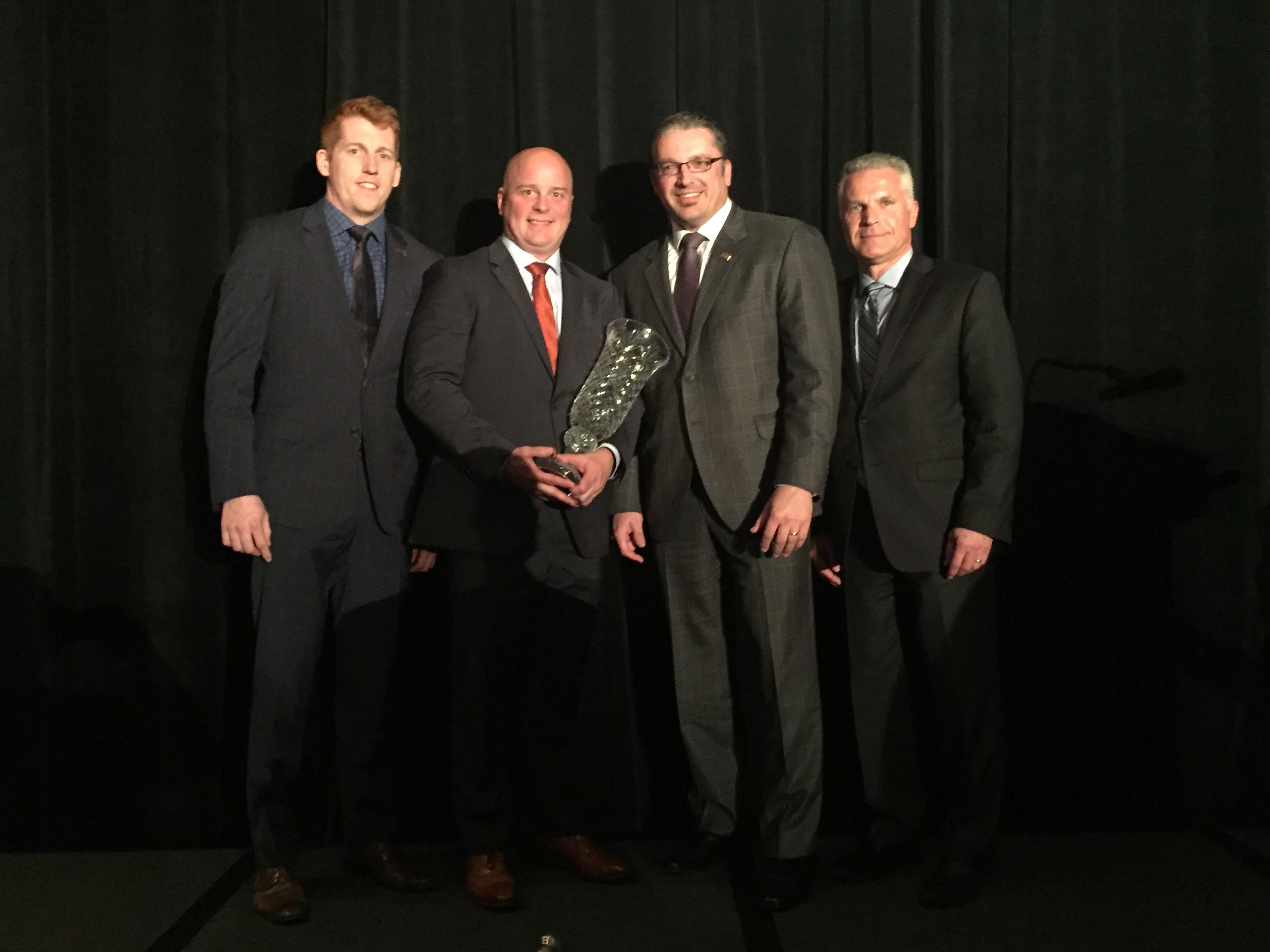 Jim Montgomery and his staff won the AHCA's Spencer Penrose Award as National Coach of the Year for 2016-17.