MINNEAPOLIS - Freshman forward Joey Anderson scored a power play goal in the final minute of regulation to lift second-seeded Minnesota Duluth to its first-ever NCHC Frozen Faceoff championship in front of a rambunctious crowd of 10,297 Saturday night at Target Center.

It was the first conference playoff trophy since 2009 for the Bulldogs (25-6-7) and an unprecedented sixth-consecutive win over North Dakota (21-15-3), including fifth this season. UMD led for much of the game after scoring three goals over a 58-second span early in the second, before UND’s Trevor Olson tied the game at three apiece with 2:46 to play in regulation.

"Once they scored that third goal we all had to take a deep breath on the bench and make sure we stayed calm," said Anderson, who scored the game-winner after his centering pass deflected off a North Dakota defender.

In the fifth meeting of the season between the two rivals and the 235th overall, tensions mounted early and often in the game, with 57 total penalty minutes being assessed between the two teams. And although all three of North Dakota’s goals came on the power play, the Bulldogs had the upper hand in the special teams department, scoring twice with the extra skater and killing off 7-of-10 UND power plays, including three separate 5-on-3 opportunities, to win the game.

“I’m really excited for our team, and certainly our seniors, who experienced the defeat in the (Frozen Faceoff) championship game last year,” said UMD head coach Scott Sandelin. “We certainly earned that, but it wasn’t easy. This group has shown that character and resiliency all year long.”

Sophomore forward Adam Johnson, who was one of four Bulldogs named to the Frozen Faceoff All-Tournament Team, put UMD ahead 3-1 with a power play goal at 2:28 of the second stanza, the third goal in a 58-second span. The two previous goals came 17-seconds apart; Dominic Toninato tied the game 90-seconds into the period on a rebound, before Riley Tufte picked the stick-side corner on North Dakota goaltender Cam Johnson to put UMD in front.

“It was nice to get out of it only down one goal, but I think our guys did a hell of a job,” Sandelin said. “From our goaltender all the way through our penalty killers, that’s not an easy situation, especially with their power play and some of the guys they have. To get out of it gave our team a huge lift.”

After making 32 saves against UND Saturday night, in addition to a 24-save, two-goals allowed effort in Friday night's semifinal win, Minnesota Duluth freshman goaltender Hunter Miska was named to the All-Tournament Team.

North Dakota sophomore forward Brock Boeser put the Fighting Hawks ahead 1-0 in the opening period, scoring on a feed across the slot from freshman Tyson Jost, who would later add a power play goal of his own to make it a 3-2 game midway through the second period.

It appeared to be a worst-case scenario for the Bulldogs, who had outscored UND 17-5 in four previous meetings this season, but gave up three power play goals. While the Fighting Hawks had several good scoring chances on the man advantage, the Bulldog penalty kill unit took control in the final minutes of the major penalty.

“I thought our team showed exceptionally well here, as a young team on this stage with these teams here,” said UND head coach Brad Berry, of his team -- the seventh-youngest in college hockey. “We didn’t win, but it made our group a lot stronger.”

UMD’s win continues an interesting Frozen Faceoff trend, where the previous year’s runner-up in the title game returns to be crowned champion the next season. The Bulldogs lost to St. Cloud State in last year’s title game, who fell to Miami in the 2015 championship. In the inaugural Frozen Faceoff, the RedHawks fell to Denver. 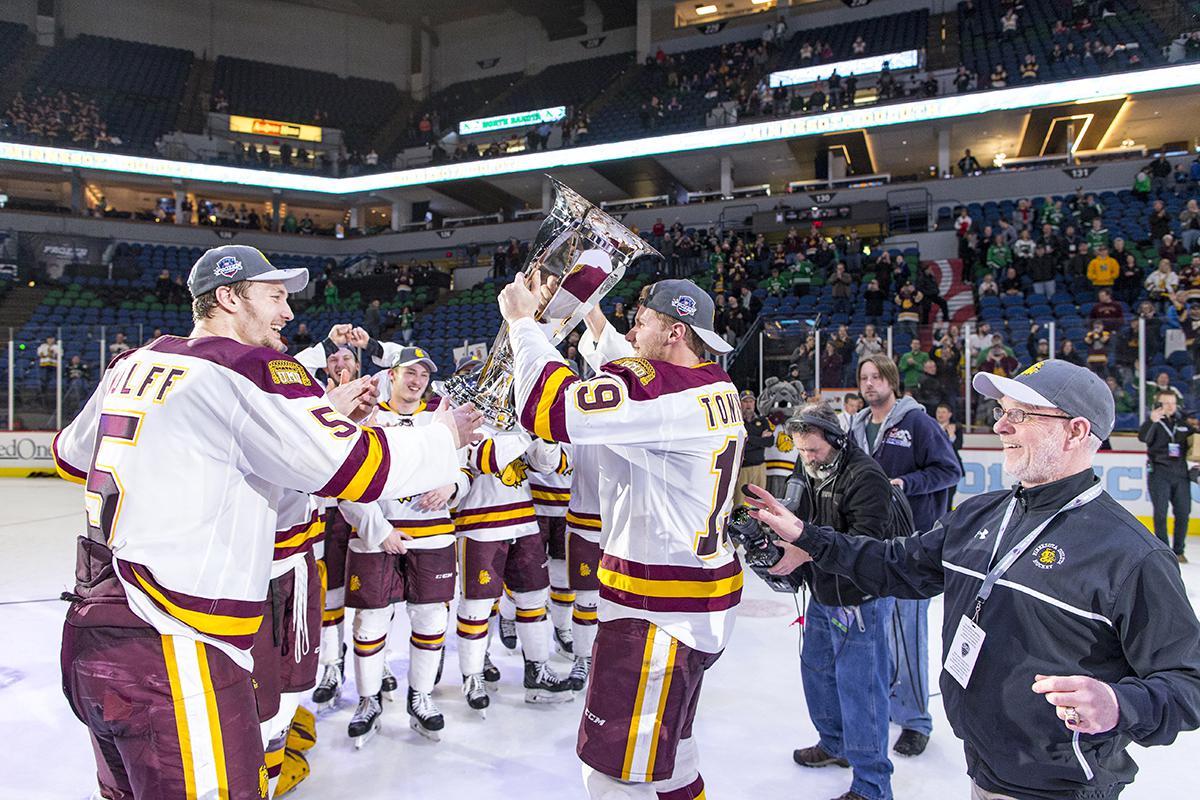 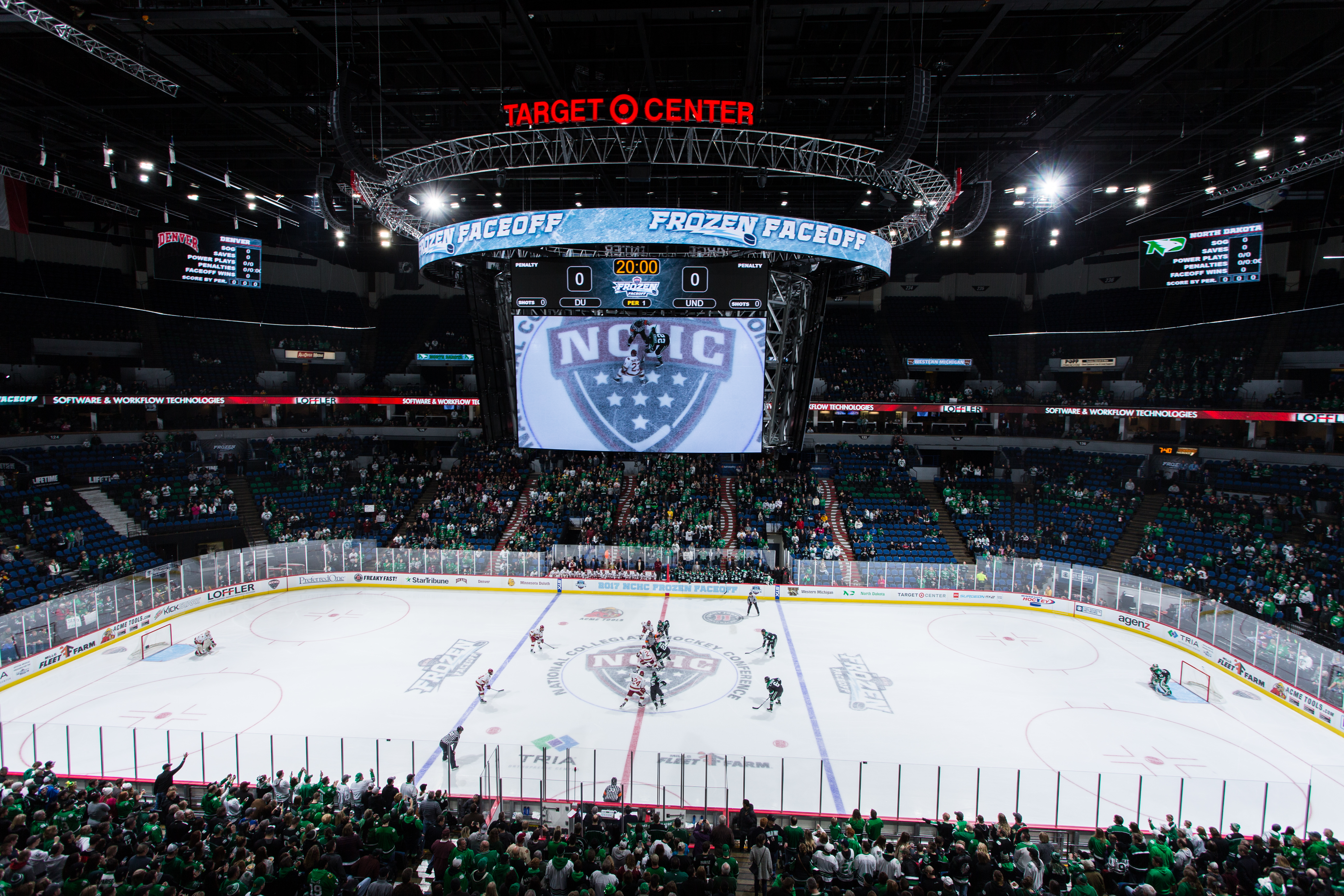 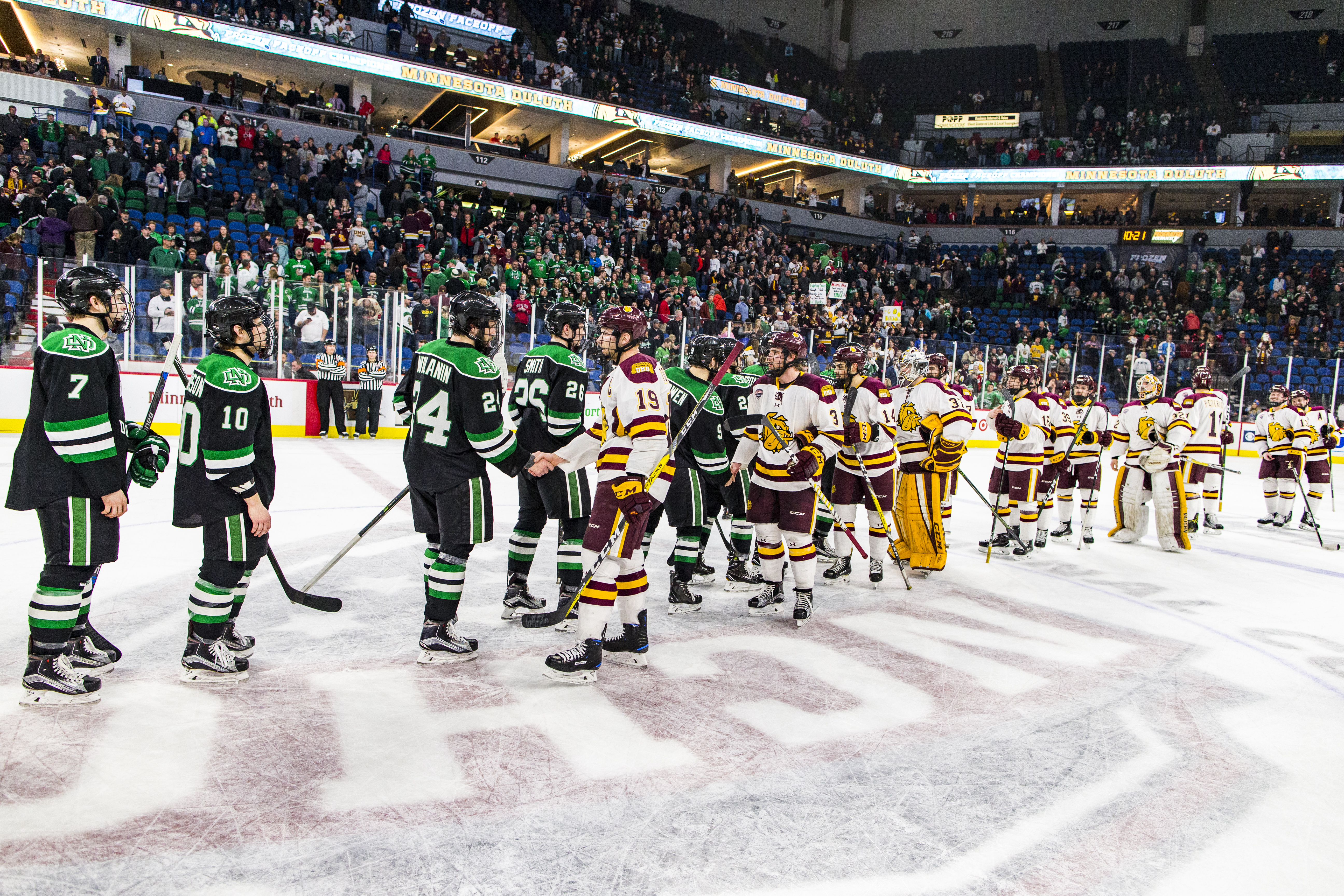 The teams shake hands after a hard-fought championship game. Photo by Jordan Johnson

#NCHCHockey leads all conferences with 3⃣ finalists up for @CCMHockey/@AHCAHockey Men's Division I Coach of the Yea… https://t.co/kC6nPwyEeT

Kale is the second Bronco to earn the NCHC's Postgraduate Scholarship The @WMUHockey 🅰️ was also named the 2020-21… https://t.co/jD0XsgF0g1

RT @WMUHockey: No one is more deserving of this than Kale Bennett! Congratulations, Kale! https://t.co/d8Fcz2q7OJ https://t.co/oWz7NKfPut