COLORADO SPRINGS, Colo. – Looking back on a successful third season of the National College Hockey Conference (NCHC), the NCHC has built upon its first two seasons of competition while continuing to make strides and improvements both on and off the ice. Among the highlights of the 2015-16 campaign was a new 3-on-3 overtime format, a new television partner, the creation of the NCHC Postgraduate Scholarship and the conference’s first NCAA National Champion in North Dakota.

The NCHC held its Annual Meeting with all coaches, Athletic Directors and Faculty Athletics Representatives in Naples, Fla. April 25-26, along with Presidents/Chancellors in Colorado Springs, Colo. May 19, to discuss several topics, including a recap of last season, as well as possible changes for the future. The following is a review of the NCHC’s successes and accomplishments during 2015-16, which includes some topics discussed at the Annual Meeting, as well as other possible changes for the future and some changes that have already been approved.

“Collectively, the membership of the National Collegiate Hockey Conference continues to set the bar higher each and every year. As our focus has keenly shifted to improvements for the future, we celebrate an incredible 2015-16 season. Culminating with the conference’s first National Champion, the entire year once again proved why the NCHC is one of the most innovative and best conferences in all of college hockey,” Commissioner Josh Fenton said. “We remain focused and guided by improving the experiences of our student-athletes and fans while being a leader nationally.”

COMPETITION
Continuing on the incredible competitive success in 2014-15, this past year proved to be the NCHC’s best season yet in its short three-year history.

ACADEMICS
While on-ice performance is certainly a focus for the NCHC, the conference is extremely proud to recognize the academic successes of our student-athletes and institutions over the past season.

FINANCIAL
The first competitive seasons saw two straight surplus positions for the conference. Although the fiscal year has yet to conclude for 2015-16, the conference is again projecting a surplus for 2015-16. The NCHC has been able to sustain a healthy financial model thanks to sound budgeting, spending efficiently, enhancing existing revenue streams and diversifying revenue through new opportunities. Among the factors that contributed to the NCHC’s financial success are:

3. NCHC.tv – A 30 percent increase in revenue was seen from the second season of having NCHC.tv, which continues to help diversify the NCHC’s revenue stream. Nearly $250,000 was generated through NCHC.tv subscriptions, which is an increase from last season of approximately $56,000. Nearly 87 percent of the NCHC.tv revenue will be distributed back to member schools.

4. Merchandise/Licensing – A small portion of NCHC revenue also comes from apparel and merchandise sold through the NCHC Fan Shop on NCHCHockey.com and at the Frozen Faceoff. The NCHC collects licensing fees for apparel and products containing the NCHC mark(s). With a first-time Frozen Faceoff champion, two teams in the Frozen Four and North Dakota winning the national championship, fans purchased more apparel than in previous years. The NCHC expects merchandising/licensing related revenue to be up by approximately 50 percent.

At the conclusion of our inaugural season, the NCHC Board of Directors voted to establish a reserve account. The fund was created in the fall of 2014 and the surplus revenue from each of the first two seasons has been placed in the account. The expected surplus from Fiscal Year 16 will also be added to the account this fall. The goal is to reach approximately one year’s worth of annual operating expense budget in the reserve account. The reserve fund is meant to be used as a mechanism to assist the annual financial operations should it be warranted.

NCHC TOURNAMENT/FROZEN FACEOFF
The focus of the conference office throughout the season, and perhaps the most visible production by the NCHC, is the NCHC Tournament, and specifically the Frozen Faceoff. With two tournaments to serve as guides, the NCHC used feedback provided by fans and member school participants to make improvements for the 2016 NCHC Tournament.

BRANDING/FAN ENGAGEMENT
Another area that the NCHC spends a lot of time and focus on is expanding the NCHC’s brand and engaging with our fans. With season three complete, the conference brand continues to grow but is still focused on further expansion nationally, while strengthening what has already been developed in member school markets. The efforts to expand the brand are done by developing affinity with fans through the following engaging efforts:

OFFICIATING
Perhaps the most visible element of the NCHC week in and week out is its officiating at NCHC venues each weekend. Over the past season, the NCHC continued its process of focusing on on-going education, communication and supervision.

CONFERENCE GOVERNANCE
Although not typically seen by fans, behind the scenes the NCHC has several documents, committees and governance structures, which make decisions for the conference and outline the day-to-day procedures for conference staff. The governing documents are updated each offseason with policy and rule changes, while the NCHC’s overall governance structure was altered in 2015-16.

FOCUS ON THE FUTURE

While improvements continue to be made and the conference had a very strong ‘junior season,’ the NCHC feels there are still several areas of focus for improvement during the upcoming 2016-17 season. During the NCHC’s Annual Meeting in Naples, Fla. in late April and the NCHC’s Annual Board of Directors Meeting in Colorado Springs in May, many topics were discussed and some small changes were finalized. In addition, the conference will review its strategic plan and examine feedback from fans, coaches, student-athletes and administrators to come up with our goals and strategies for next season, with the idea of improving the fan experience and the student-athlete experience at the forefront.

As the National Collegiate Hockey Conference begins to plan for the 2016-17 season, the conference would like to thank all its fans for their support and passion during the past season. The feedback provided by fans is very insightful to the NCHC and helps steer our focus for improvements and changes. The 2015-16 season was truly special, culminating in our first national championship, but we want to applaud all eight of our teams for their success and impact they had on further showcasing what the NCHC is about. As we move through the summer and head toward next season, we encourage our fans to stay involved on social media and visit NCHCHockey.com, especially as we unveil a new site, and NCHC.tv. The NCHC looks forward to creating an even better fan and student-athlete experience next season as we build upon a great 2015-16 campaign. We can’t wait to see you at the rink in five months as we drop the puck on our fourth season! 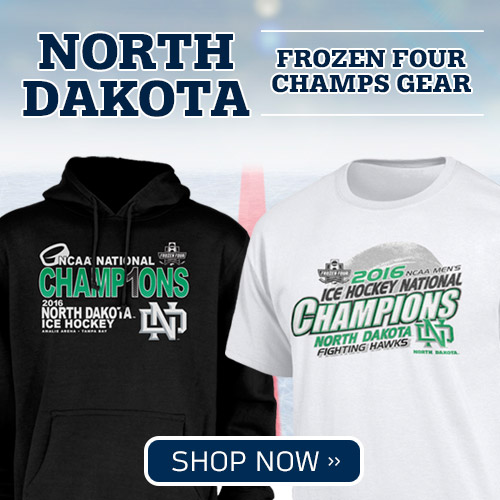