COLORADO SPRINGS, Colo. – The National Collegiate Hockey Conference (NCHC) announced its Bauer NCHC Players of the Week for the week of Feb. 16-22 on Monday with Denver capturing two honors and North Dakota claiming the other two. The winners for week 18 of the season are Denver freshman forward Danton Heinen for Offensive Player of the Week, DU senior blue liner Joey LaLeggia for Defenseman of the Week, North Dakota freshman forward Nick Schmaltz for Rookie of the Week and UND junior netminder Zane McIntyre for Goaltender of the Week. LaLeggia has now earned his award five times this season, including each of the last three weeks, while Heinen has earned Rookie of the Week three times giving him four NCHC weekly honors this year. McIntyre is now a four-time NCHC Goaltender of the Week as well this season.

Heinen continued his recent success, extending his point streak to five games with four points in a sweep of Colorado College. The Boston Bruins prospect tallied two goals and two assists in the pair of wins while posting a plus-5 rating on the weekend. In Friday’s 6-4 win, he scored two goals and handed out an assist, tying the game in the first period with his first goal while scoring the go-ahead goal in the second period to break a 3-3 tie. Heinen was named the game’s first star Friday with a plus-4 rating in the contest. The next night, he handed out a primary assist on DU’s final goal to seal the 6-3 victory. Heinen put five shots on goal on the weekend, including three in Saturday’s win.

LaLeggia won his third straight NCHC Defenseman of the Week honor after a four-point outing in a sweep of rival Colorado College. LaLeggia dished out two assists in Friday’s 6-3 victory, helping set up DU’s first two goals, each of which tied the game against the Tigers. The Oilers prospect also posted a plus-3 rating in Friday’s win and put three shots on goal. The next night, LaLeggia tallied two more points, both on the power play, recording the primary assist on the first goal of the game while scoring the Pioneers’ third goal to put them up 3-1 in the second stanza. He also fired eight shots on goal Saturday, while earning third star of the game. LaLeggia finished the series with 11 shots on goal, a plus-2 rating and two blocked shots

Schmaltz helped North Dakota earn a road sweep at Western Michigan with a two-assist weekend. In Friday’s 3-1 victory, he had the primary assist on UND’s final two goals, setting up the game-winner on the power play in the second period, while picking up the lone assist on an insurance goal midway through the third period. The Blackhawks prospect posted a plus-1 rating in the win. In Saturday’s 3-2 overtime victory, Schmaltz fired two shots on goal despite being held scoreless. He finished the weekend with a plus-1 rating and three shots on goal.

McIntyre backstopped UND to a road sweep at Western Michigan while posting a 1.46 goals-against average and a .957 save percentage in the series. On Friday, he allowed just one goal, which came in the final minute of the game with an extra attacker, while making 33 saves to pick up a 3-1 victory and earn first star of the game honors. He made 26 of his 33 saves in the first 40 minutes Friday. The next night he stopped 34 shots while conceding just two goals, both of which also came with an extra attacker in the final four minutes of the game. McIntyre was named second star of the game in Saturday’s 3-2 overtime win as he made three saves in overtime to help set up the win. The Bruins prospect totaled 67 saves on 70 shots in the series to earn both wins while he did not allow an even-strength goal all weekend. McIntyre also helped UND go 7-for-8 on the penalty kill against the Broncos, including 4-for-4 on Friday.

Offensive Player of the Week
Drake Caggiula, Jr., F, UND – Scored the game-winning goal in both games at WMU to lead UND to a sweep with Saturday’s game-winner coming in overtime and Friday’s coming on the power play.

Anthony Louis, So., F, Miami – Tallied three points and a plus-3 rating in a split with UMD, setting up Miami’s only goal in a loss Friday, while he scored a goal and assisted on the overtime game-winner Saturday.

Peter Maric, Jr., F, CC – Recorded a four-point weekend against Denver, including a career-high three points in Friday’s loss when he scored two goals and had an assist, while he scored another goal on Saturday.

Defenseman of the Week
Paul LaDue, So., D, UND – Scored a goal and assisted on the overtime game-winner in Saturday’s 3-2 win at WMU while he blocked eight shots and put six shots on goal in the series sweep of the Broncos.

Ethan Prow, Jr., D, SCSU – Notched a three-point weekend in a sweep of Omaha, scoring the game’s first goal while setting up the second in a win Friday, while he also had an assist in Saturday’s shutout win and finished with five blocked shots in the series.

Jaccob Slavin, So., D, CC – Scored CC’s first two goals at Denver Saturday with his first goal coming on the power play, while he blocked four shots in the series and put eight shots on goal on the weekend.

Carson Soucy, So., D, UMD – Had a three-point weekend in a split at Miami, assisting on a goal in Friday’s win, while he notched a goal and an assist in Saturday’s overtime loss and blocked two shots in the series.

Goaltender of the Week
Charlie Lindgren, So., G, SCSU – Backstopped the Huskies to a sweep of Omaha, posting a 1.50 GAA and a .936 save percentage in the series, including 21 saves on Saturday to pitch his second shutout of the season, while he made 44 saves total and allowed just three goals all weekend. 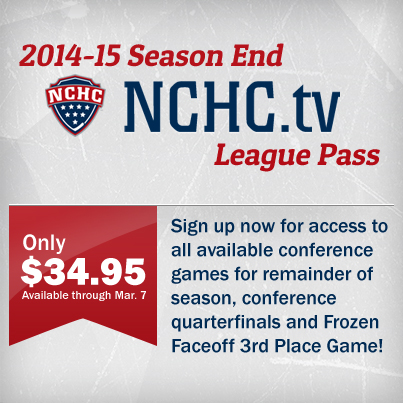