COLORADO SPRINGS, Colo. – The National Collegiate Hockey Conference (NCHC) announced its Bauer NCHC Players of the Week for the week of Jan. 19-25 on Monday with St. Cloud State capturing two of the four honors. The winners for week 14 of the season are Miami senior forward Cody Murphy for Offensive Player of the Week, North Dakota sophomore blue liner Keaton Thompson for Defenseman of the Week, St. Cloud State freshman forward Patrick Russell for Rookie of the Week and SCSU sophomore netminder Charlie Lindgren for Goaltender of the Week. Murphy and Russell have now each captured their respective awards twice this season.

Murphy had a four-point weekend to lead the RedHawks to a split with No. 11 Denver. On Friday, he had just one shot on goal and an even plus/minus rating, but Saturday he exploded for two goals and two assists as he had a hand in all four goals in a 4-1 win. Murphy set up the first goal of the game with an assist in the first period. He then scored the eventual game-winner in the second period with a sharp wrister and added another goal in the third period to make it 3-1. Murphy capped his night with an assist on an empty-net goal to seal the win and snap Miami’s three-game losing skid. He was named the game’s first star Saturday and posted a +4 rating in the contest with the four points a career high. Murphy finished the series with six shots on goal and a +4 rating.

Thompson helped North Dakota sweep Colorado College to extend its win streak to five, while patrolling UND’s blue line. On Friday he led a defense that allowed just one goal in a 2-1 win over CC while killing both Tiger power plays. The next night, he dished out the primary assist on the game-winning goal in the third period with a long outlet pass. The Anaheim Ducks prospect also posted a career-best +3 rating in Saturday’s 5-3 win and blocked two shots. He was on the ice for UND’s go-ahead goal in the first and second periods as well. Thompson finished the weekend with a +3 rating and two blocked shots while UND went 3-for-5 on the penalty kill.

Russell compiled a four-point weekend to lead the Huskies to a split with Western Michigan, scoring two goals and adding two assists. In Friday’s 7-0 shutout, he notched a career-high three points. Russell scored a power play goal in the second period to make it a 4-0 contest and added assists on SCSU’s final two goals in the third period with one coming on the power play. Russell put four shots on goal and posted a +2 rating in Friday’s win as well. The next night, he scored the Huskies’ second goal to put SCSU up 2-0 in the second period and fired six shots on goal en route to second star of the game honors. Russell finished the weekend with 10 shots on goal and compiled a +2 rating in the two contests.

Lindgren backstopped the Huskies to a split with Western Michigan while posting a .936 save percentage and a 1.52 goals-against average in two starts. On Friday he stopped all 23 shots that came his way for his first shutout of the season and second of his career. He also helped SCSU go 3-for-3 on the penalty kill in the 7-0 victory and was named the game’s third star. The next night, he pitched two more periods of shutout hockey, including a save that made ESPN’s Top 10 Plays of the Day in the second period, before having his scoreless streak snapped in the third period in a 3-2 loss. Lindgren still made 21 saves in the loss and finished with 44 saves on 47 shots in the series.  He also helped SCSU go 4-for-5 on the penalty kill against the Broncos.

Offensive Player of the Week
Michael Parks, Sr., F, UND – Compiled three points and a +2 rating in a sweep of CC, scoring the game-winner short-handed and adding an assist in Friday’s win, while setting up the go-ahead goal on Saturday.

Defenseman of the Week
None

Goaltender of the Week
Zane McIntyre, Jr., G, UND – Backstopped UND to a sweep of CC, making 55 saves and posting a .932 save percentage in the two wins, while compiling a 2.00 goals-against average, including making 30 saves and allowing just one goal in Friday’s win.

Matt McNeely, Jr., G, UMD – In his only start of the weekend Saturday, made a season-high 31 saves and allowed just one goal in a 2-1 win over Minnesota with a .969 save percentage. 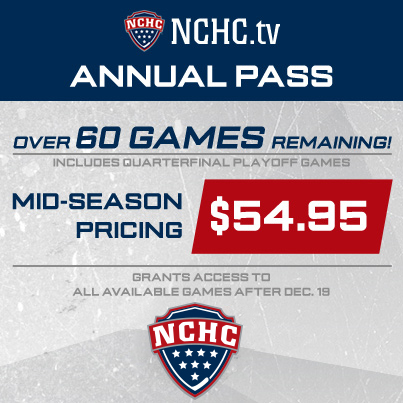