COLORADO SPRINGS, Colo. – The National Collegiate Hockey Conference (NCHC) announced its Bauer NCHC Players of the Week for the week of Nov. 3-9 on Monday. The winners for week five of the season are Miami junior forward Riley Barber for Offensive Player of the Week, Minnesota Duluth junior defenseman Andy Welinski for Defenseman of the Week, Omaha freshman forward Avery Peterson for Rookie of the Week and Miami junior netminder Jay Williams for Goaltender of the Week.

Barber compiled a four-point weekend to lead Miami to a sweep of Colorado College, scoring twice while adding two assists. In Friday’s 3-0 shutout, he assisted on Miami’s second goal and was on the ice for all three, posting a +3 rating with seven shots on goal. On Saturday, the Washington Capitals prospect tallied a season-high three points, all in the second period, scoring twice, including once on the power play, while recording the primary assist on Miami’s final goal to seal the 5-1 victory. Barber put five shots on goal Saturday when he was named the game’s first star and was +2 as he finished the weekend with a +5 rating and 12 shots on goal.

Welinski anchored a UMD blue line that allowed just three goals all weekend, but none even strength, in a sweep at St. Cloud State – UMD’s first at SCSU since 1999. He also recorded two points in the series and posted a +5 rating. On Friday, the Anaheim Ducks prospect scored the game-tying goal on the power play in the closing minutes of the third period to force overtime before the Bulldogs went on to win, 3-2, while he was +2 in the contest. The next night, Welinski assisted on the game-winning goal in the first period in a 3-1 victory, while he was +3 in the contest and blocked three shots. He helped UMD’s penalty kill finish 6-for-9 on the weekend as the only goals the Bulldogs surrendered in the series.

Peterson had a breakout weekend to lead Omaha to a sweep at Ohio State. He scored three goals and added two assists for five points in the series, while posting a +3 rating on the weekend.  On Friday, the Minnesota Wild prospect scored a power play goal and chipped in an assist on the game-winning goal in a 4-1 victory. The next night, Peterson notched a career-high three points, tallying two goals for his first career multi-goal game, while also handing out an assist. He scored UNO’s first two goals Saturday, tying the game at 1-1 and adding a second tally late in the first period to help spark a 4-3 comeback win, while his assist helped tie the game at 3-3. He also had a +3 rating in Friday’s game and has four goals in his last three games.

Williams continued his strong start to the season, backstopping Miami to a sweep of Colorado College, the RedHawks’ first ever NCHC sweep. He compiled a 0.50 goals-against average and a .973 save percentage in the series as he allowed just one goal all weekend, which came on the power play. On Friday, Williams stopped all 21 shots that came his way for his first shutout of the season and third of his career in a 3-0 win. The next night, he made 15 saves, giving up just the power play goal in a 5-1 victory. On the weekend, Williams stopped 36 of 37 shots faced and helped kill nine of 10 Tiger power plays.

Offensive Player of the Week
Justin Kovacs, Sr., F, WMU – Totaled two points in a split at Denver, scoring a goal in Friday’s loss, while handing out an assist on the game-winner in Saturday’s 6-3 victory.

Michael Parks, Sr., F, UND – Compiled four points in a sweep at Wisconsin, scoring two goals, including the short-handed game-winner, in Friday’s 4-3 victory, while dishing out two assists in Saturday’s 5-1 win as he finished the series with a +2 rating.

Dominic Toninato, So., F, UMD – Tallied three points and a +4 rating in a sweep at St. Cloud State, chipping in two assists in a 3-2 overtime win Friday, including setting up the game-tying goal that forced OT, while scoring UMD’s first goal in Saturday’s 3-1 victory when he was +3.

Defenseman of the Week
Chris Dienes, So., D, WMU – Tallied three points in a split at Denver with a goal and an assist in Friday’s loss and another assist in Saturday’s win, while posting a +4 rating in the series, going +2 each night, with eight shots on goal.

Scott Dornbrock, Fr., D, Miami – Helped Miami’s blue line limit CC to one goal in two goals and scored Miami’s first goal in a 5-1 win Saturday for his first career goal, while posting a +4 rating in the series and aiding a penalty kill unit that was 9-for-10 on the weekend.

Troy Stecher, So., D, UND – Compiled a +3 rating and blocked three shots in a sweep at Wisconsin, while scoring a goal and adding an assist in Saturday’s 5-1 victory as he helped UND go 6-for-7 on the penalty kill in the series.

Rookie of the Week
Scott Dornbrock, Fr., D, Miami – Helped Miami’s blue line limit CC to one goal in two goals and scored Miami’s first goal in a 5-1 win Saturday for his first career goal, while posting a +4 rating in the series and aiding a penalty kill unit that was 9-for-10 on the weekend.

Frederik Tiffels, Fr., F, WMU – Handed out a pair of assists for his first collegiate points in WMU’s 6-3 win at Denver Saturday, while posting a +2 rating in both games for a +4 rating in the series.

Ryan Massa, Sr., G, Omaha – In his only appearance of the weekend, made 25 saves and helped UNO kill all five opponent power plays to lead the Mavs to a 4-1 win at Ohio State, compiling a .962 save percentage in the game, while he remained unbeaten (5-0-1) on the season.

Zane McIntyre, Jr., G, UND – Remained unbeaten on the season, compiling a 2.00 GAA and a .909 save percentage in a sweep at Wisconsin, stopping 17 shots in a 4-3 win Friday, while making 23 saves and allowing just one goal in a 5-1 victory Saturday, helping kill 6-of-7 UW power plays in the series. 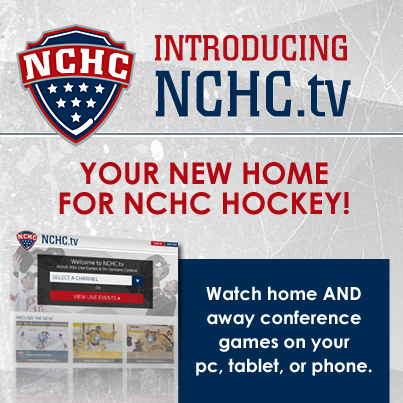 @MikeMatthews9 Awesome! Us too! 👊 Enjoy the game!