COLORADO SPRINGS, Colo. – After the opening weekend of regular season play, the National Collegiate Hockey Conference (NCHC) had several standout performers but the NCHC’s inaugural Players of the Week for the week of Oct. 7-13 are Miami sophomore forward Riley Barber for Offensive Player of the Week, St. Cloud State senior defenseman Kevin Gravel for Defenseman of the Week, Miami freshman defenseman Trevor Hamilton for Rookie of the Week and Denver senior Sam Brittain for Goaltender of the Week.

Barber totaled seven points on four goals and three assists on the weekend to help the RedHawks sweep Ohio State. On Friday night, the sophomore winger dished out two assists, collecting the primary helper on Miami’s first two goals. Saturday, he notched a career-high five points in a 6-3 victory, scoring four goals, including the game-winner, while adding an assist. Barber posted a +4 rating in Saturday’s win, while he became the first RedHawk to score four goals in a game since December 11, 2009.

Gravel played a key role at both ends of the ice for the Huskies over the weekend, scoring a goal while blocking five shots and posting a +2 rating in two games. On Friday, he blocked three shots and had a +1 rating, helping SCSU score a short-handed, game-winning tally for a 3-2 victory. On Saturday, he jump-started the Huskies offense, scoring a third-period goal to help SCSU rally from a 2-0 deficit to earn a tie. Gravel was also +1 Saturday and blocked two more shots. He helped St. Cloud State finish the weekend 6-for-6 on the penalty kill while firing nine shots on goal.

Hamilton was strong in his first collegiate action, registering three assists from the blueline and blocking three shots to aid in Miami’s sweep of Ohio State. On Friday, he assisted on the game-winning goal on the road while blocking a shot and posting a +1 rating. The next night, he handed out a pair of helpers, again assisting on the game-winner, while blocking two shots. Hamilton also had a +3 rating in the contest Saturday and finished +4 on the weekend.

Brittain was a rock in net for Denver, pitching a pair of shutouts as the Pioneers swept Merrimack. He totaled 53 saves on the weekend, stopping 25 in a 1-0 win Friday and 28 more in a 4-0 whitewash Saturday. The two shutouts doubled his career total entering the season while it marked the first time Denver has ever opened the season without allowing a goal in either of its first two games. Brittain is the first DU netminder to pitch back-to-back shutouts since 2009. He helped Denver go 9-for-9 on the penalty kill over the weekend, as well.

The NCHC Players of the Week will be announced each Monday during the season at 1 p.m. ET/noon CT/11 a.m. MT.

Offensive Player of the Week

Rocco Grimaldi, So., F, UND – Compiled five points on two goals and three assists on the weekend, including a four-point outing in a win on Friday, while earning No. 1 star of the game both nights

Nolan Zajac, So., F, Denver – Totaled two points, scoring the game-winning goal and game’s only goal early in Friday’s win, and had an assist and a +1 rating in Saturday’s win

Defenseman of the Week

Will Butcher, Fr., D, Denver – Scored a goal in Saturday’s win, while blocking two shots on the weekend to help DU pitch a pair of shutouts

Ben Paulides, Jr., D, Miami – Had a goal and an assist while posting a +5 rating with two blocked shots in two games

Dillon Simpson, Sr., D, UND – Blocked four shots and posted a +2 rating on the weekend while helping UND go 16-for-17 on the penalty kill

Rookie of the Week

Matt Marcinew, Fr., F, Denver – Dished out two assists Saturday, including on the game-winner, and blocked two shots on Friday

Kirk Thompson, Fr., G, UNO – Earned a win in his first and only start in net Saturday, stopping 25 of 27 shots

Goaltender of the Week

Zane Gothberg, So., G, UND – Posted a 1.21 GAA and .955 save percentage in nearly 100 minutes of action, combining for 42 saves while allowing just two goals in two games

Matt McNeely, So., G, UMD – Allowed just one goal in each game (two total), combining for 40 saves while helping UMD go 11-for-11 on the penalty kill 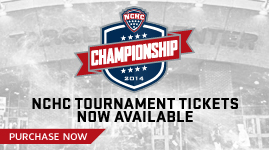