Weems, who will officially start the role of NCHC Commissioner on Wednesday, July 6, comes to the Conference after spending the last 10 years as the Director of Athletics at St. Cloud State University, which is a member of the NCHC.

“We are thrilled to welcome Heather Weems as the next Commissioner of the NCHC,” said Andy Armacost, Chair of the NCHC Board, Co-Chair of the NCHC Commissioner Search, and President of the University of North Dakota. “Her record of exceptional leadership and her vision for the future of the Conference stood out to the members of the Board. Heather will undoubtedly take the NCHC to new heights, building upon its success as the premier conference in college hockey.”

Weems is very familiar with the NCHC, having served as the Chair of the NCHC Athletic Council this past season. She has been a member of the NCHC’s Student-Athlete Well-Being Task Force since it was formed in 2019, as well. During her tenure at SCSU, the St. Cloud State men’s hockey team won three Penrose Cups, made its first two Division I men’s Frozen Fours in program history, and with her hire of head coach Brett Larson, the Huskies made their first NCAA Championship game in 2021. Weems has been in her role at St. Cloud State since well before the Conference began play in October of 2013 and has been involved in NCHC operations during all nine years of conference competition.

Throughout her career, Weems has served on and held various leadership and committee positions in the NCHC, Western Collegiate Hockey Association (WCHA) and the Northern Sun Intercollegiate Conference (NSIC). She brings a 23-year career in athletic administration to the NCHC, which started at a fellow NCHC member institution, the University of Denver, in 1999. Following her time in Colorado and prior to arriving at St. Cloud State University, Weems was a senior member of the athletic administration at Drake University.

“Heather will be an exceptional leader for the NCHC. She is a talented Athletic Director, has detailed knowledge of the league and will incorporate her passion for hockey to sustain and advance the NCHC as the model conference in college hockey. I am personally and professionally excited to work with her in this role,” added Josh Berlo, Co-Chair of the NCHC Commissioner Search and Director of Intercollegiate Athletics at the University of Minnesota Duluth.

“As both a participant in and observer to the growth of the NCHC during my time as Director of Athletics at St. Cloud State University, I am both grateful and excited to transition into this new role as the leader of the conference. The hockey community is tightly connected and I look forward to upholding the strong tradition and innovative spirit that has defined the NCHC and its member institutions.” said Commissioner Weems. “As we embark on our 10th year and continue to adjust to a changing NCAA landscape, we will remain a destination for student-athletes to pursue their dreams through competitive quality, a meaningful student-athlete experience, and a commitment to our campuses and communities.

“I want to thank the Board of Directors, the search committee, including Board Chair Andy Armacost and Search Co-Chair Josh Berlo, current Summit League/former NCHC Commissioner Josh Fenton, and my NCHC colleagues for their confidence. I also want to acknowledge my incredible appreciation and respect for my student-athletes, coaches, colleagues, and friends at St. Cloud State. It has truly been my honor and privilege to serve the University and lead Husky Athletics.”

“It has been an honor to work with Heather during my past four years at St. Cloud State University. She has been at the forefront of ensuring that our athletic coaches and campus recreation staff were able to provide the highest quality experiences for our students, student-athletes, faculty, staff, community and fans,” said St. Cloud State University President Robbyn Wacker. “Her commitment to St. Cloud State has been remarkable and she has accomplished so much while here. I wish her the best of success in her new position and I look forward to working with her in her new role to advance the success of the NCHC.”

WHAT THEY’RE SAYING ABOUT HEATHER WEEMS
“The NCHC Board of Directors have made an outstanding hire of Heather Weems as the next Commissioner to lead the best college hockey conference. Her in-depth knowledge of conference operations and college hockey landscape, student-athlete-first mentality, and vast experiences working on campuses that sponsor the sport make her an ideal selection for the NCHC. Great things are ahead for the NCHC, and I couldn’t be more excited for Heather to be the next Commissioner.” - Josh Fenton, Commissioner of The Summit League and former NCHC Commissioner

“I am equal parts excited and disappointed to see Heather Weems named the next NCHC commissioner. Heather has been an incredible advocate for our program and the athletic department during her tenure in St. Cloud and I can’t wait to see her continue her excellent work at the conference office. She is the ideal candidate to keep pushing our league forward while remaining at the forefront of collegiate hockey. With that being said, I am sad to see her depart St. Cloud State Athletics. Her daily commitment to the men’s hockey program and all Husky student-athletes allowed for us to provide the best experience possible for student-athletes at SCSU. She will be missed here on campus, but we wish her the best of luck in her new role, the Commissioner of the premier conference in college hockey.” - Brett Larson, Head Men’s Hockey Coach at St. Cloud State

“Heather has a deep and genuine commitment to intercollegiate athletics and to student-athletes. That passion, and her sincerity, have made her a very effective collaborator in working with University Advancement to build key donor relationships that have strengthened facilities and improved the experience of our student-athletes at St. Cloud State. Her passion, commitment and leadership style will make her a very effective leader for the National Collegiate Hockey Conference and allow it to continue its ascent as America’s premier collegiate hockey conference.” - Matt Andrew, Vice President of University Advancement at St. Cloud State.

“Heather is a passionate and collaborative leader, which has shown in the first-class experience she has helped provide for student-athletes at St. Cloud State. We will certainly miss her in the Northern Sun, but know she will do great things for the student-athletes of the NCHC. Wishing Heather and her family all the best!” - Erin Lind, Commissioner, Northern Sun Intercollegiate Conference (NSIC)

ABOUT THE NATIONAL COLLEGIATE HOCKEY CONFERENCE
The NCHC is an eight-school NCAA Division I men’s hockey conference that is entering its 10th season of competition in 2022-23. Its members are: Colorado College, the University of Denver, Miami University, the University of Minnesota Duluth, the University of Nebraska Omaha, the University of North Dakota, St. Cloud State University and Western Michigan University. Since the NCHC began play in 2013-14, 32 NCHC programs have qualified for the NCAA Tournament, including 13 Frozen Four berths and five of the last six NCAA national champions (2016-19, 2022). For more information, visit the NCHC website at www.nchchockey.com and follow the conference on social media @theNCHC on Twitter, Instagram and Facebook. 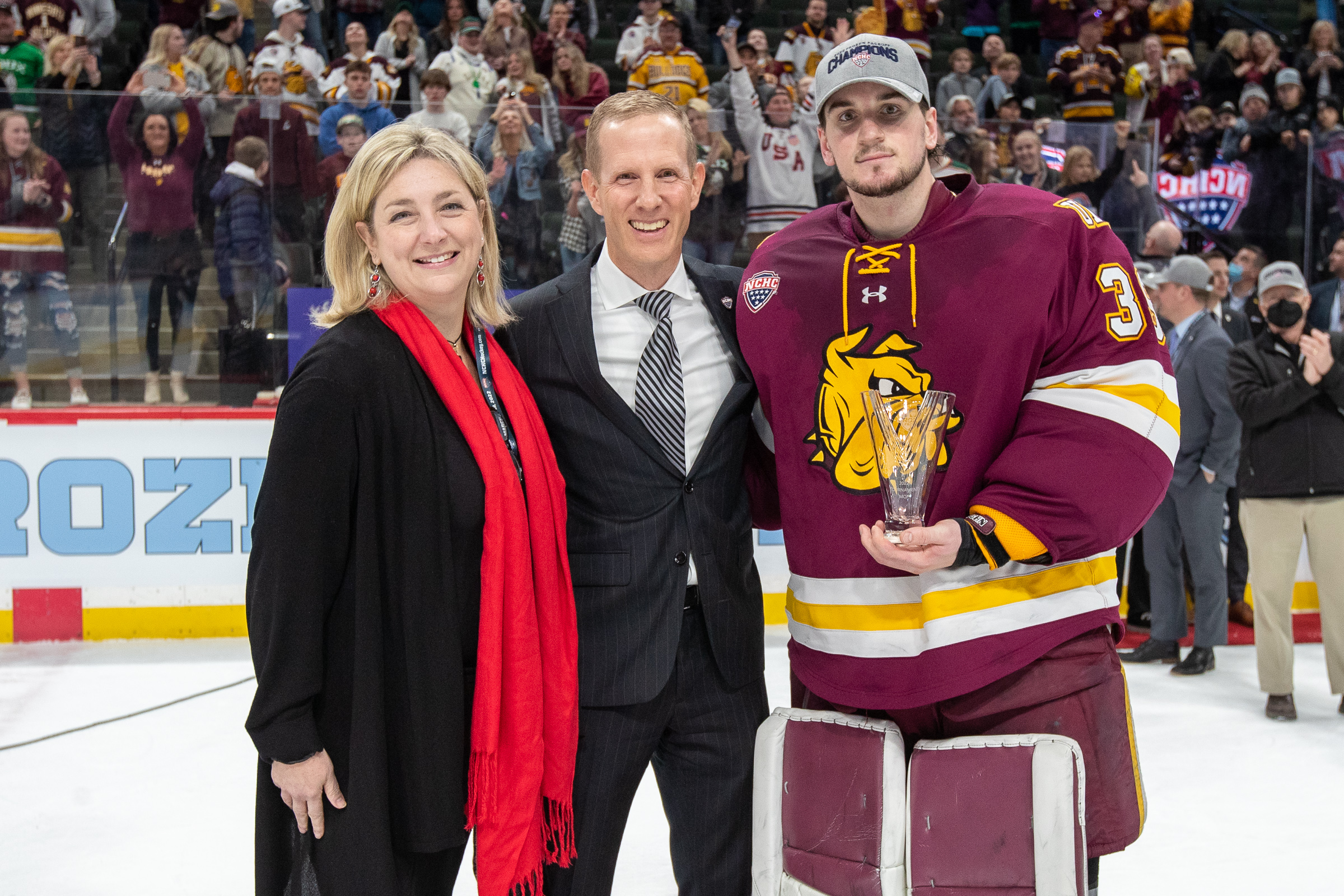 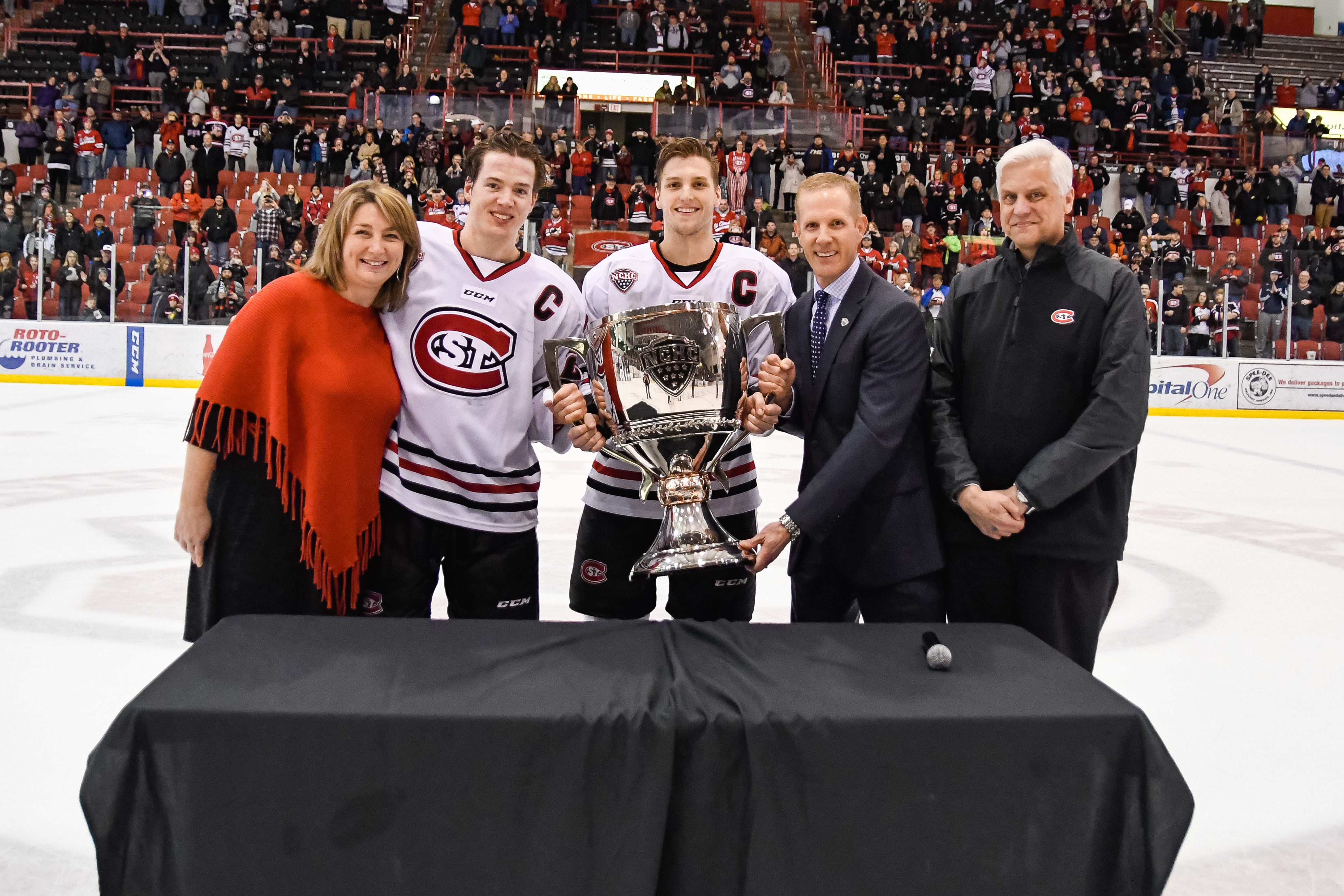