ST. CLOUD, Minn. - When Veeti Miettinen first came to St. Cloud in the fall of 2020, it was quite the culture shock coming from his home country of Finland. His lone connection came in a countrymate, fellow Finn Jami Krannila. However, that connection was still a little bit of a stretch, as the two had met just once. Their familiarity with each other only consisted of exchanging texts and a few phone calls along the way.

Fast forward to now and you’d be hard-pressed to believe the sophomore winger and junior center haven’t been life-long friends. They’re road roommates, live in the same house together, sit next to each other in the locker room and they can’t even be separated on the ice as they make up the 'International' line, along with Zach Okabe, that has been key to the Huskies’ recent success.

“I knew basically one guy and it was Jami, and we’d only met once before I came here,” Miettinen said. “So I really didn’t know where I was going when I got here (St. Cloud) and I didn’t know any people from here. I was both nervous and excited because everything was new, but I was just living in the moment and I really didn’t know what to expect. Now we’re really good friends and he’s helped me so much, so it’s been awesome.”

Miettinen, a 2020 Toronto Maple Leafs’ draft pick, adjusted to life in North America well away from the rink and certainly showed no issues adjusting on the ice. In 24 games during his freshman regular season, he registered 10 goals, 13 assists and went on to win the NCHC’s Rookie of the Year award. He added another goal in the NCAA Tournament.

The Huskies made it to the NCHC Frozen Faceoff Championship, where they fell to North Dakota, and reached the National Championship game for the first time, where they came up short against UMass. Quite the introduction to college hockey.

“When I played juniors in Finland it wasn’t that physical, and every game here is physical and there are a lot of battles, so that was the biggest change,” Miettinen said. “Everyone knows that people that play in the NCAA sign NHL deals and you’re basically playing against pro players, but it was a good challenge and I thought I handled it well. It was probably one of my biggest steps I’ve taken in my career, but it was a good year.”

Although the skilled winger impressed on the ice, behind the scenes, there was one person that played a key part in his success -- Krannila.

“He has been huge for me and he made life a lot easier last year,” Miettinen said. “He knows the language very well, he’s smart and he’s helped me out a lot with school and life. If I have something I’m struggling with or want to ask he usually knows. He was one of the guys who I spent a lot of time around last season and now we do everything together.”

One year older, Krannila had a two-year head start on his countrymate. On top of being a class above Miettinen, he came over to the States and played a season of junior hockey in Sioux Falls (USHL) before making the jump to the collegiate level. Going through that experience himself, he knew first-hand the growing pains that come with living in a new country and learning the lifestyle.

Krannila joked some people probably thought it was his younger brother at times because of it, but he saw it as an opportunity to take the freshman Miettinen under his wing.

“Ever since the first day I wanted to be an easy guy for him to come to and wanted to show him around to help him out,” Krannila said. “He only spent about two weeks here (in St. Cloud) last year and then we’re in the bubble, so he didn’t get to experience a lot of what normal college hockey is. But I was surprised how well he handled it. Even though it wasn’t the easiest year off the ice, he had a great year and I’m super proud of him.”

Throughout his own experience in Sioux Falls, Krannila also had another Finn on the team, which he said made a difference.

“You might not know some of the language, but you never talk it back home and have conversations in English, so that was tough,” Krannila said. “I did have another Finn on my team which was nice to have someone else there with me and going through the same process. So I wanted to do the same for Veeti.

“Doing school in English, the food was different, life away from the rink. I knew the first couple months were hard. But you kind of get used to it and it just gets easier every day.”

The two Finns did play against each other a handful of times when they were under 18, but besides that, they hadn’t skated together back in their home country. Krannila hails from Nokia, a little over two hours north of Miettinen’s hometown of Espoo, which is Finland’s second-largest city.

“It was a pretty easy choice for me,” Miettinen said. “Coach Gibbons came to Finland while I was playing in the Under-20 league and he wanted to talk to me after one of the games. I was already interested in playing college hockey and knew a couple people from Espoo and old teammates that were playing NCAA, and I wanted to come over here as well.

“I think this place just stood out to me when I first talked to Gibbons about it. The culture and everything was just like I wanted it to be and it just felt right to come here.”

The Huskies were also the first school to offer Krannila.

“Gibbons came over to Finland and introduced me to the college scene and showed me around, because I had no clue what college would be like,” Krannila said. “Then I came here for a visit later on and it was amazing. It was a family feel and I think it was Larson’s first day as a head coach when I came here, but he seemed like a great coach and all the players that I met and talked to said they loved it here, and so far I have too.”

Now with a full season of playing together under their belts, the chemistry is evident and both feel right at home. Their home rink at SCSU, the Herb Brooks National Hockey Center, has an Olympic-sized sheet of ice, which they both grew up playing on, and the weather at times is similar to their home country. Although they miss friends and family, along with black sausage and other Finnish dishes back home, they’ve slowly gotten used to the college lifestyle.

Miettinen lived in the freshmen dorms last year, but the two moved into the same house for this season. On the ice, they feel right at home too.

Arguably the biggest challenge they’ve faced while at St. Cloud State will come next month though. Just a few stalls down in their home locker room sits senior forward Sam Hentges, who will be playing for the United States in Beijing next month along with SCSU senior defenseman Nick Perbix. Their head coach, Brett Larson, will be behind the American bench too.

They face a dilemma between supporting teammates and Finnish pride.

“If they’re playing each other I might have to go with the USA since they’ll (Perbix and Hentges) be playing and Lars, but otherwise Finland,” Krannila said.

As for Miettinen, he’s sticking with his bloodlines.

“When the U.S. is playing against other countries of course I’m going to be rooting for them, but if they play Finland it’s going to be hard,” he said. “I think I’d have to go with Finland on this one though. Sorry guys, it’s my home country.”

In the meantime, Miettinen, Krannila and the rest of the Huskies are focused on this weekend after having their series at Denver postponed last weekend due to COVID-19 protocols. The Huskies host Miami this Friday and Saturday at the Herb Brooks National Hockey Center and the Finns will surely be flying around the rink -- together. 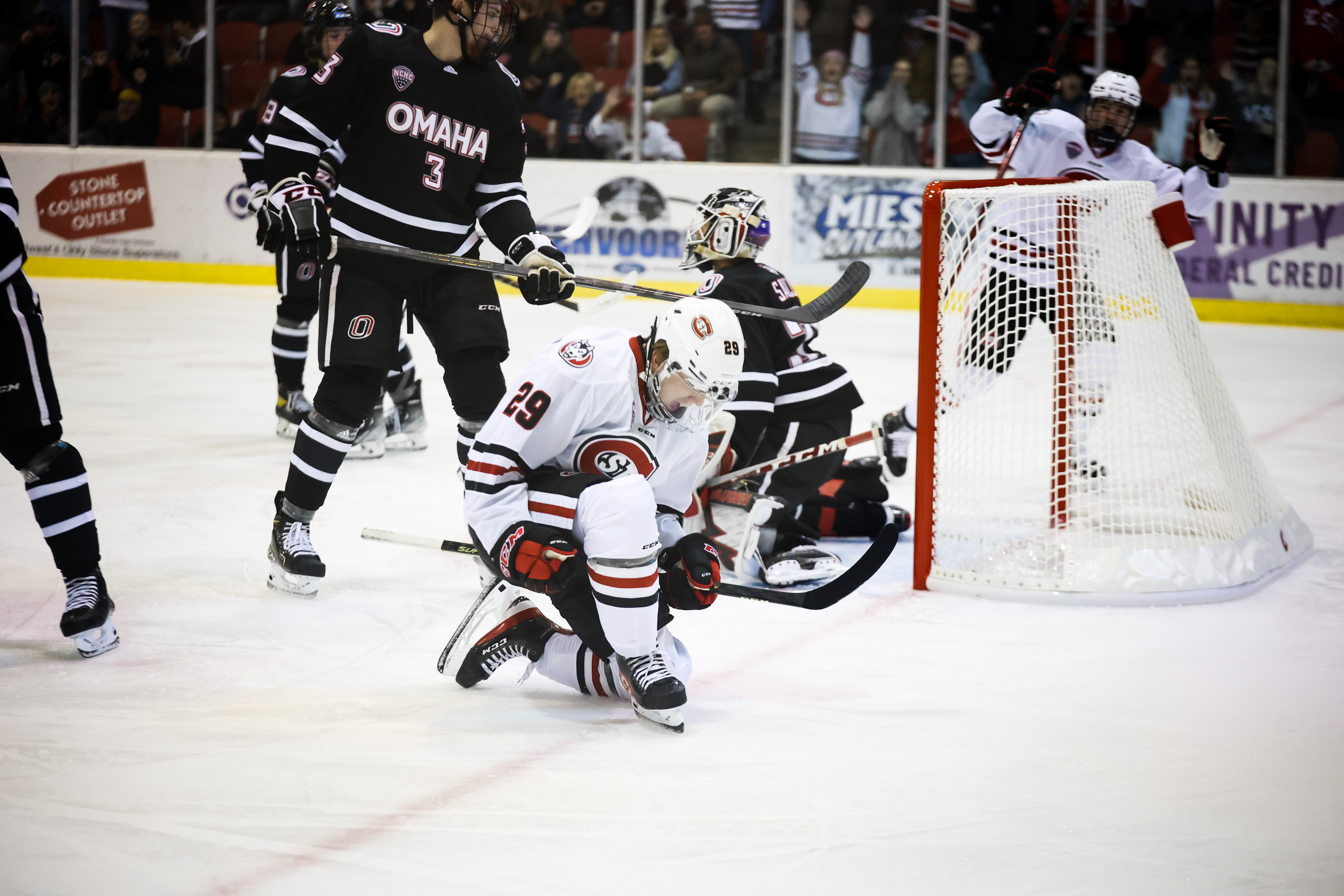 Veeti Miettinen celebrates a goal for the Huskies. He earned NCHC Rookie of the Year honors last season despite it being his first year in the United States. 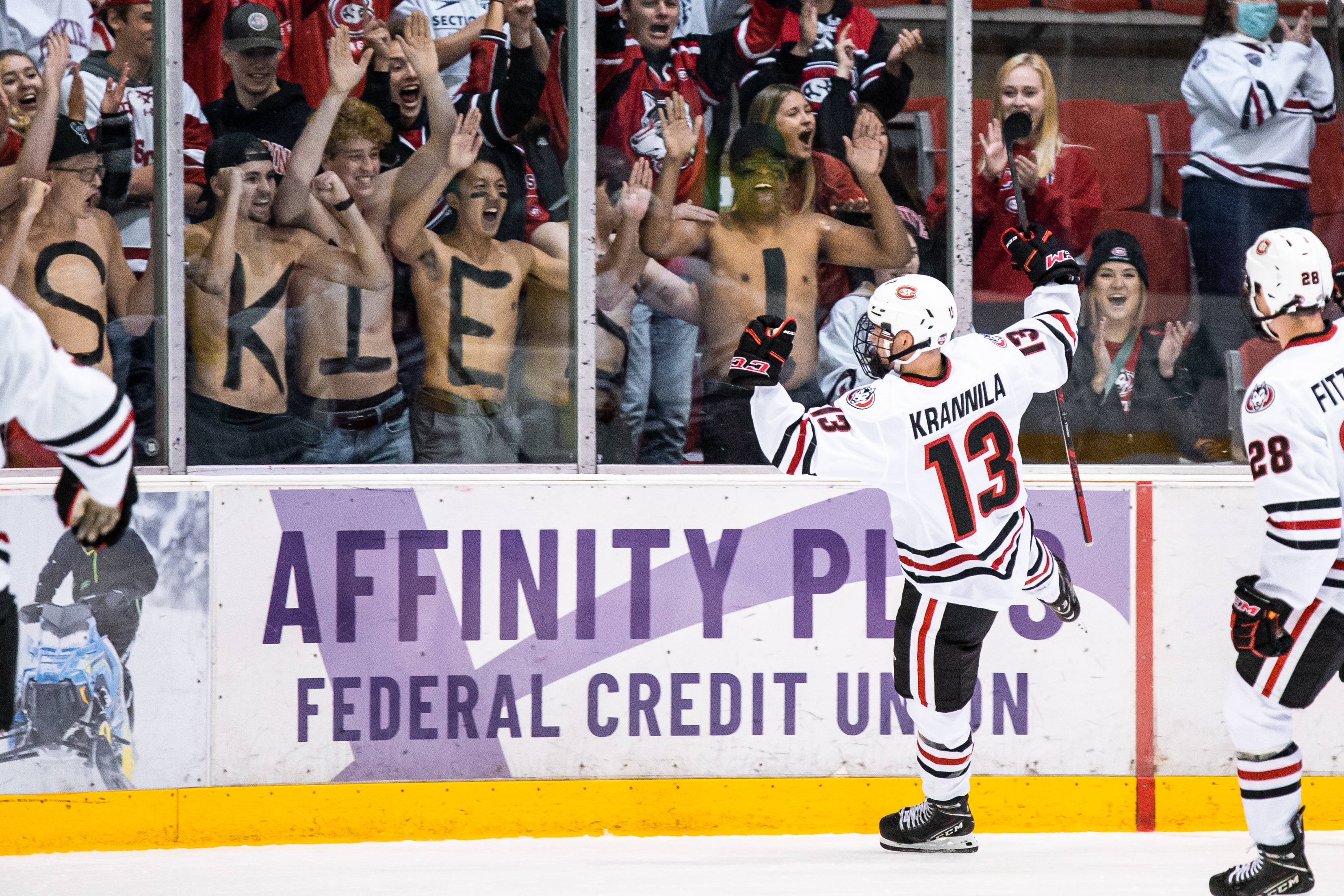 Last year, @jamikrannila2 helped #NCHChockey Rookie of the Year Veeti Miettinen get acclimated to the U.S. Now the… https://t.co/Ja1bqDnXSL

A childhood diagnosis of type 1 diabetes left @UNDmhockey's @BrendanBudy questioning whether hockey would be a part… https://t.co/uqaa0UMvTP