"I want to thank Coach Murray for his tremendous leadership of our hockey program during his time as head coach," said Beauregard. "He has been a valuable member of our coaching staff, as well as a major asset to Western Michigan University and the entire Kalamazoo community. Coach Murray has laid the foundation for our hockey program to regularly compete for NCHC championships and NCAA Tournament opportunities. Our hockey student-athletes have also excelled in the classroom during Coach Murray's tenure."

"I'm thrilled that Bronco Hockey has been a part of Coach Murray's storied coaching legacy and I wish him and his wife, Ruth, all the best in their next adventure," Beauregard added.

Murray echoed his excitement about the direction of Bronco Hockey.

"The announcement that I am resigning and Pat Ferschweiler is moving into the role as head coach is one that I felt was necessary," Murray said. "The last 10 years at WMU have been as rewarding as anything I have done in my life. I am in great health and full of energy, so this is not a retirement. I still have a number of things on my bucket list and now is the time to pursue those.

"My goal has always been to have our program in great shape when I did decide to move on," Murray added. "We are in that position right now and the transition to Pat will be smooth and well-received by our present players and alumni. He is a Bronco and is well prepared.

"I have always considered my position at Western to be a privilege and responsibility and gave my best every day," Murray concluded. "I want to thank everyone for the opportunity I have enjoyed and look forward to being a Bronco in a different way. Go Broncos!"

Murray caps a decade leading Broncos that included three seasons of 20-plus wins, two NCAA tournament bids and the 2012 Central Collegiate Hockey Association Tournament Championship. WMU has produced nine National Hockey League players and four All-Americans during his tenure. He leaves with 167 career wins at the helm, second-most in program history. He was named the 2016-17 NCHC Coach of the Year after leading the Broncos to a top four finish in the league, rebounding from a seventh-place finish the previous season.

"I'm excited to be able to hand the reins of our Bronco Hockey team over to one of our own, Pat Ferschweiler," Beauregard said. "Pat showed his leadership qualities as a player for the Broncos, as an assistant coach and as our associate head coach. He is a great teacher of the game and has coached at all levels under some outstanding mentors, including Andy Murray and Jeff Blashill.

"As a recruiter, Coach Ferschweiler has attracted some of the best talent ever to play at Western Michigan," Beauregard continued. "I look forward to his new leadership role as the head coach of our hockey program with a goal of our team regular competing for championships while continuing to excel in the classroom."

Ferschweiler inherits a program returning several key pieces from last year's COVID-19 shortened season. Seniors Paul Washe, Ethen Frank and Josh Passolt chose to the remain with the program and take their extra year granted by the NCAA due to COVID. Reigning NCHC Offensive Defenseman of the Year Ronnie Attard returns for his junior season as well. He finished the season second in scoring with 22 points on eight goals and 14 assists and was named an AHCA West Division First Team All-American.

Ferschweiler also thanked Murray for leaving the program in a place to succeed going forward.

"Coach Murray has given everything he has to this program for the last 11 years and has left it in a better place," Ferschweiler continued. "I would like to thank him for his friendship and leadership through our time together. I also wish him all the best in whatever challenge he takes on next. We have a tremendous group of players on this team and I'm very excited to get started as their head coach."

The Broncos open the 2021-22 campaign with the annual Brown & Gold Game at Lawson Arena on Saturday, Oct. 2. The regular season opens on Friday, Oct. 8, when Ferris State visits Lawson for the first of a home-and-home series. 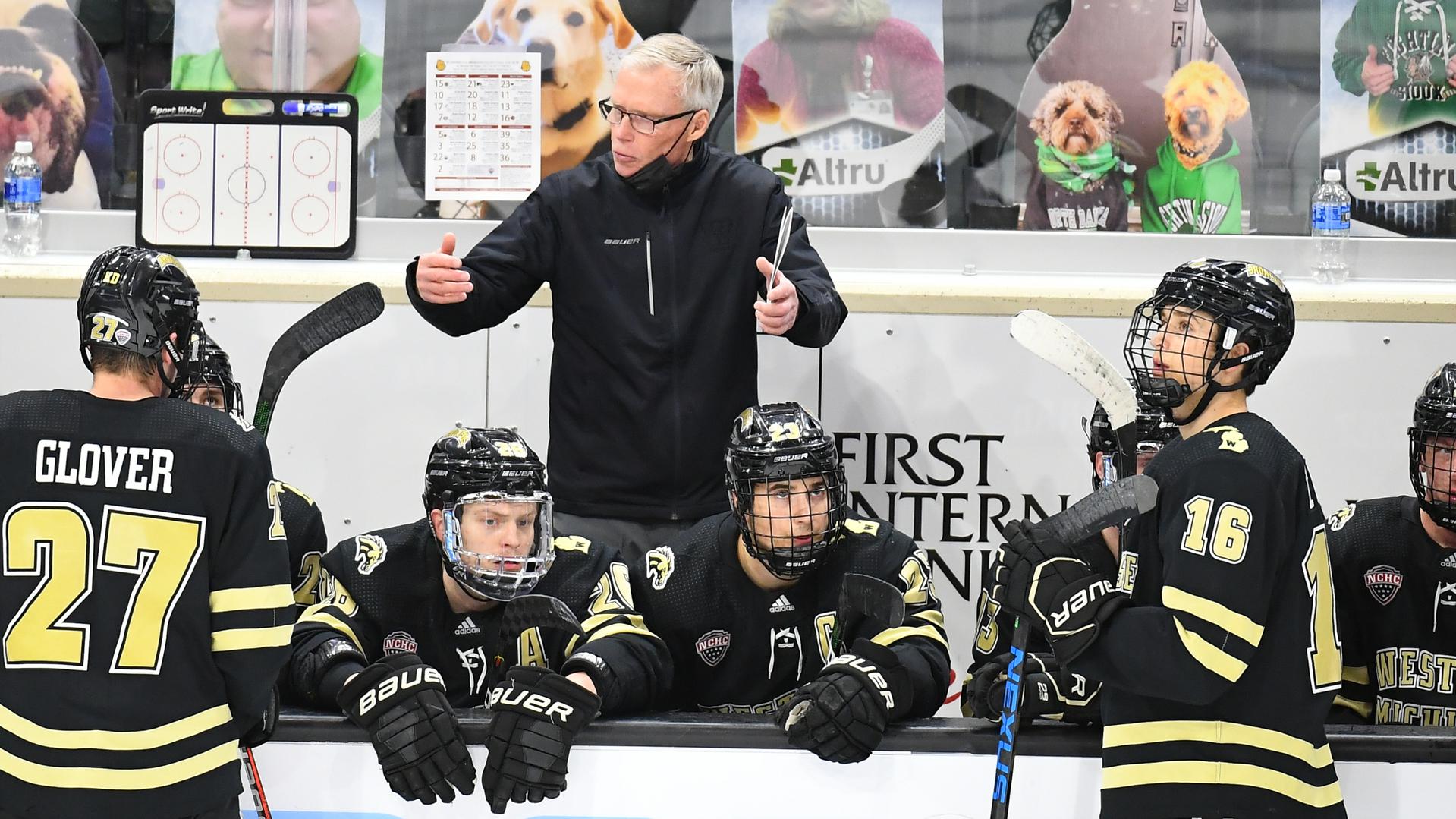 Andy Murray spent 10 seasons as WMU's head coach. He was the second-longest tenured coach in the NCHC. Photo by Russ Hons 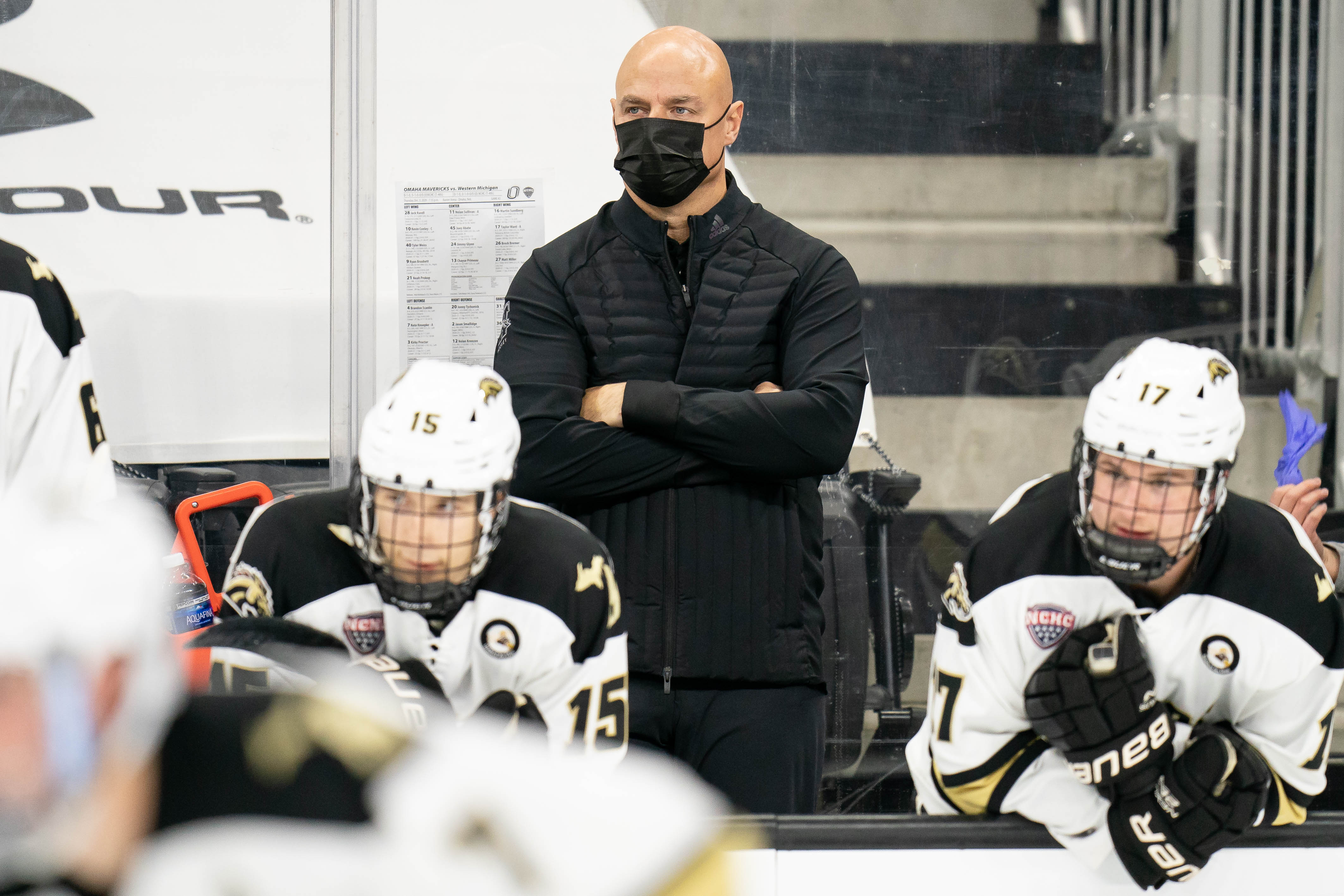 Pat Ferschweiler, a former WMU player himself, takes over as head coach of his alma mater after serving as associate head coach since 2019 and an assistant in a previous stint at WMU from 2010-14. Photo by Mark Kuhlman

We're home to 3⃣ of the 11 nominees for this year's Hockey Humanitarian Award, presented to @NCAAIceHockey's finest… https://t.co/gQMuwCBGmm

RT @MickHatten: TRL reporters' question: With teams losing members to the Olympics, which team will win the conference? @mattwellens @Schlo…