COLORADO SPRINGS, Colo. - After not being able to be presented his award in person last year, Geno Binda of South Weymouth, Massachusetts has been named the seventh annual recipient of the National Collegiate Hockey Conference’s (NCHC) Mark Rudolph Officiating Achievement Award for the 2019-2020 season, NCHC Director of Officiating Don Adam has announced. Binda, who has been an NCHC referee for six seasons, was presented his award earlier this week on Monday, May 17. Due to the pandemic, Binda, who is a Boston, Mass. native, was unable to work for the NCHC during the 2020-21 season.

“Geno has been one of the top referees on our staff, year in and year out. His leadership, passion, dedication and officiating knowledge are off the charts,” Adam said. “For the success that he has experienced, Geno is a very professional and humble individual. Every NCHC game is better when Geno’s on the ice and he is a very worthy recipient.”

The presentation of the 2019-20 Mark Rudolph Officiating Achievement Award took place with Don Adam via a Zoom call, while the physical presentation of the award was made by Binda’s wife, Mary, and his father, Geno Binda Sr., who is the Supervisor of Officials for Atlantic Hockey. The presentation in Massachusetts was attended in person by Binda’s family and friends, while members of the NCHC Officiating Staff and officials in the region were able to join in celebration on the Zoom call.

“The presentation would have been completed much sooner had it not been for the pandemic and some unforeseen circumstances along the way,” Adam added. “The timing of the presentation in no way detracts from the meaning of the award.”

Binda, an avid golfer and Boston Red Sox and New England Patriots fan, operates East Coast Officiating with his wife, a business that specializes in the growth, development and advancement of hockey officials. East Coast Officiating works hand in hand with another family venture, Referees Crease, both of which schedule thousands of games up and down the East Coast, while providing officiating oversight and supervision to up-and-coming officials.

Binda began officiating youth hockey when he was only 11 years old, officiating his first ever game with his dad, Geno Sr., on Father’s Day. At age 21, Binda was the youngest referee ever selected to officiate the prestigious Beanpot Tournament, held annually in Boston between the four Boston-based Division I college hockey teams.

After working the United States Hockey League (USHL) finals in 2008, Binda advanced to the East Coast Hockey League (ECHL), where he worked both the 2010 All-Star Game and Game Seven of the 2010 Finals. Binda continued to climb the officiating ladder, landing him in the American Hockey League (AHL), where he would officiate more than 550 games prior to retiring from professional hockey. Binda was a regular working the AHL Playoffs, where he was assigned to the Conference Finals each season from 2011 to 2016. Binda also earned 2016 AHL All-Star Game officiating duties.

A mainstay on the NCHC’s Officiating staff since 2014-15, Binda worked three NCHC Frozen Faceoff championship tournaments (2017-19), including two championship games. What was sure to be a fourth Frozen Faceoff assignment was nullified by the cancellation of the 2019-20 NCHC Tournament due to the COVID-19 pandemic. Binda has also been selected to work multiple NCAA Regional Tournaments and has represented the NCHC in two NCAA Frozen Four championships -- Tampa, Fla. in 2016 and Saint Paul, Minn. in 2018.

“We are honored to present the Mark Rudolph Officiating Award to Geno for his dedication and service to the NCHC,” said NCHC Commissioner Josh Fenton. “Living in New England and traveling long distances most weekends to our member school locations showed Geno’s tremendous commitment to our conference.”

Binda married his wife, Mary, in Boston in 2012, and they are the proud parents of two daughters; Cameron (8) and Dylan (5). The family resides in South Weymouth, Mass.

“I’m so happy for Geno because he never says no (to helping),” said Mary. “He is always looking to make officiating better for all involved. He wants to give everyone around him the best chance to have a positive experience on and off the ice."

Binda and his wife are also very active in the promotion of Autism Awareness, as one of their daughters is on the autism spectrum. The Bindas also volunteer at their children’s school, where they operate educational hockey classes for kindergartners, and via their business, provide officials for multiple charity events throughout each hockey season. Much to Mary’s chagrin, Geno has been a regular participant in the NCHC’s Movember fundraising efforts and always proudly displays his ‘mo’ during the month of November.

The NCHC’s Mark Rudolph Officiating Achievement Award is named in honor of Mark Rudolph, a long-time official and distinguished administrator who resides in Colorado Springs and established USA Hockey’s National Officiating Program, among many other accomplishments. The award was officially established prior to the 2014-15 season.

Criteria for the Mark Rudolph Award recipient shall be an individual who, through dedicated effort and service, both on and off the ice, has achieved a distinguished accomplishment during the previous NCHC season, and who by his actions has significantly enhanced the NCHC and its officiating program.

The Mark Rudolph Award is typically presented to a member of the NCHC officiating staff following each season at the Conference’s officiating camp, however camps were not held prior to last season. The NCHC intends to present the 2020-21 NCHC Officiating Achievement Award at one of this fall’s officiating camps. 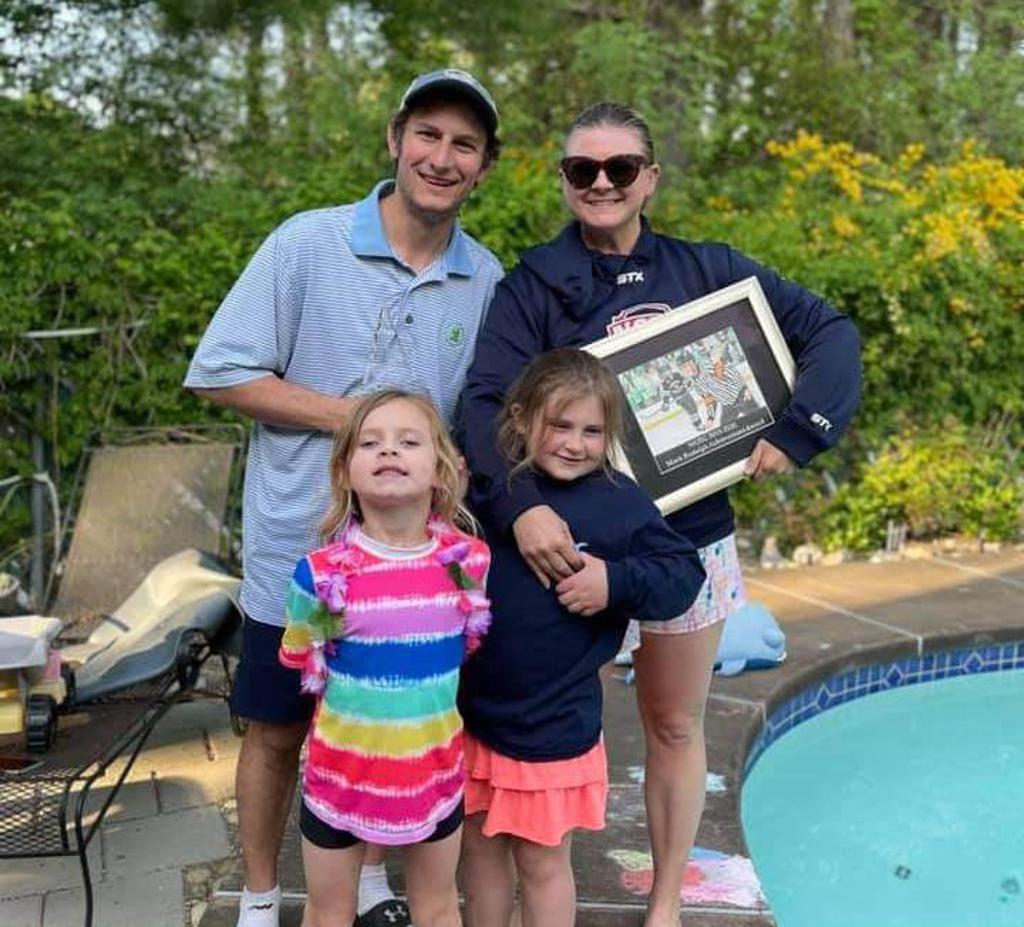 Geno Binda is presented his Mark Rudolph Award by his wife, Mary, and their two daughters at their home in Massachusetts. 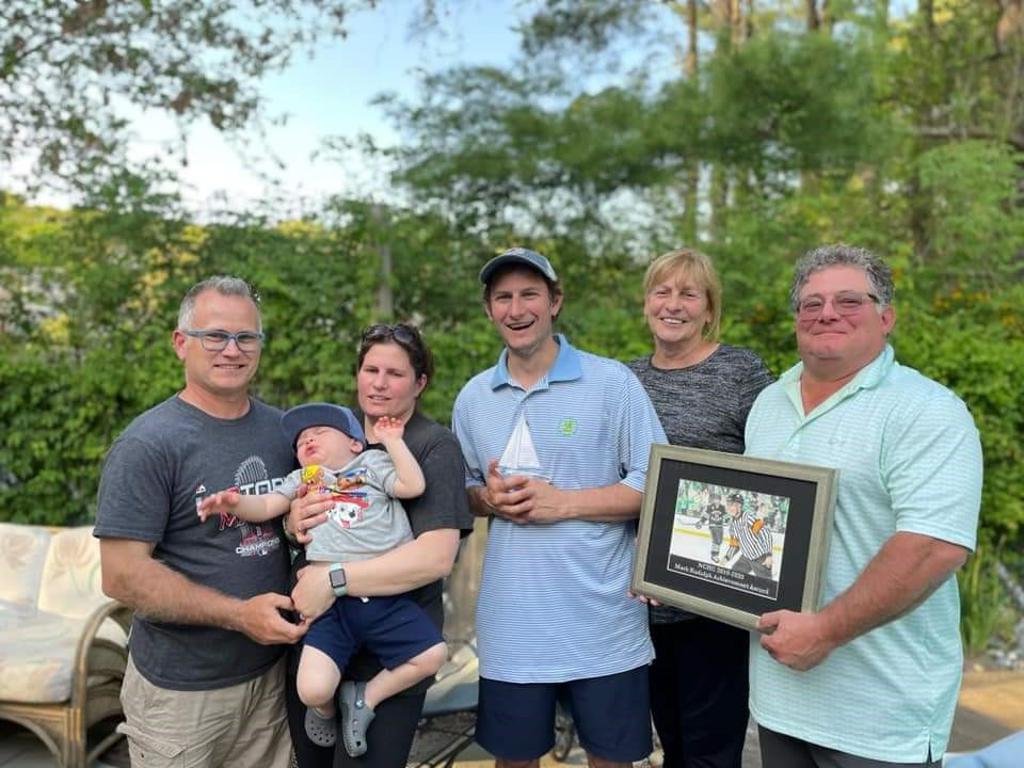 Binda's parents and other family were on hand for the presentation, as well.

RT @CCTigerHKY: Our Gold Pan games vs. Denver have been confirmed. The teams will play Jan. 22 and March 4 at @EdRobsonArena; Jan. 21 and M…

Today, we honor & remember those who made the ultimate sacrifice protecting our country's freedom 🇺🇸 Thank you for… https://t.co/7T6Sew7kUs