UMass edges UMD, 3-2, to deny Bulldogs bid for a three-peat

PITTSBURGH, Pa. – Minnesota Duluth’s bid for a three-peat came up short in overtime Thursday night at PPG Paints Arena, as Massachusetts scored 14:30 into the extra session to give them a 3-2 win over the Bulldogs in the second NCAA Frozen Four semifinal. With the win, UMass moves on to play another NCHC team in St. Cloud State in Saturday’s national championship game.

UMD controlled much of the first two periods and held a 2-1 lead after 40 minutes, but the Minutemen picked up their play the final 20 minutes and overtime. After Zac Jones gave UMass a 1-0 lead on the power play in the first period, junior forward Tanner Laderoute tied the game minutes later for the Bulldogs, cleaning up a Quinn Olson wrap-around attempt.

Junior forward Cole Koepke then put UMD in front 11:01 into the second stanza with his team-best 15th goal of the season. Koepke tried his own wrap-around that was denied, but he gathered his own rebound and rifled it past UMass goalie Matt Murray. The Bulldogs outshot UMass, 26-11, over the first 40 minutes.

In the third period, the Minutemen rallied with Anthony Del Gaizo knocking in a loose puck after a scramble in front of the net to tie the game 8:25 into the stanza. Neither team budged in the rest of regulation, sending the game to overtime – UMD’s second straight overtime game after knocking off North Dakota in a record five overtimes in the Midwest Regional final.

The Bulldogs didn’t continue their overtime magic on Thursday, however, as their run of nine straight OT wins in the NCAA Tournament came to an end when Garrett Wait scored with 5:30 left in the first extra session. Bobby Trivigno carried the puck around the net and fed it to Wait on the back door for the tap-in game-winner.

UMD outshot UMass, 38-28, in defeat, but the Minutemen held a 13-2 edge in shots in overtime. Murray made 36 saves in net to get the win, while freshman Zach Stejskal stopped 25 shots in goal for UMD. The Bulldogs went 0-for-1 on their lone power play, which was abbreviated and came late in the third period.

Minnesota Duluth finishes the season 15-11-2, having advanced to four straight Frozen Fours and winning the 2018 and 2019 national championships, including in 2019 title over UMass. The Minutemen improve to 19-5-4 as they move on to their second straight national championship game with puck drop against SCSU at 7 p.m. ET on ESPN and TSN. 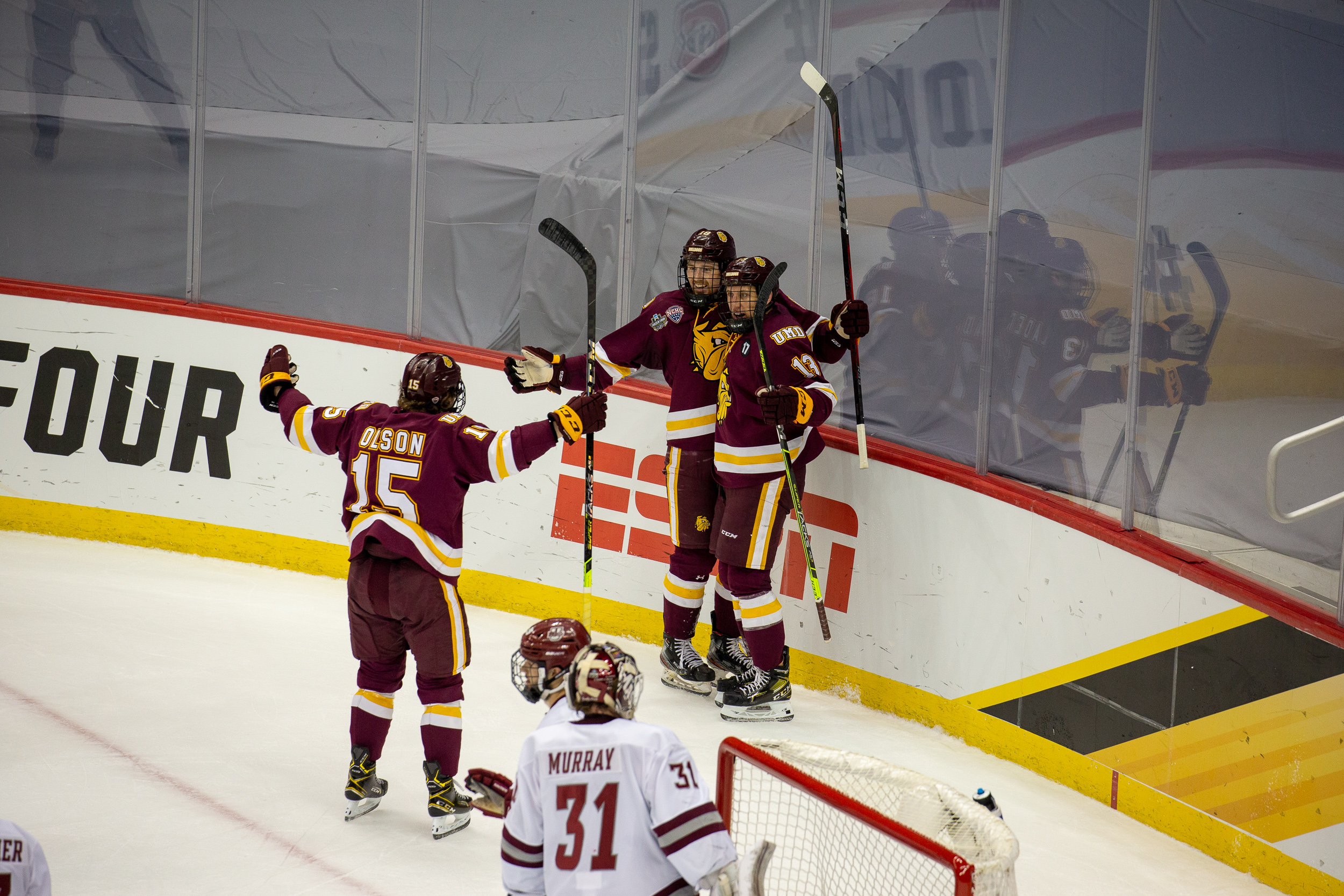 The Bulldogs celebrate Tanner Laderoute's goal that tied the game at 1-1. Photo by Jim Rosvold