PITTSBURGH, Pa. – For the first time in school history, St. Cloud State will play for the Division I men’s hockey national championship. Junior forward Nolan Walker scored the game-winning goal with less than a minute to play to lift the second-seeded No. 3/7 Huskies to a 5-4 win over fellow No. 2 seed and top-ranked Minnesota State Thursday in a thrilling first Frozen Four semifinal at PPG Paints Arena.

With the win, SCSU moves on to Saturday’s national title game where they’ll face Massachusetts for the championship, with UMass also looking for its first hockey national championship.

Entering the third period, the game was tied 3-3. The Mavericks grabbed their first lead of the game 4:18 into the final frame when Dallas Gerads finished a cross-ice feed in tight from Walker Duehr on an odd-man rush.

The Huskies then mounted a comeback, first with freshman forward Joe Molenaar, playing in only his 12th game of the season, scoring the tying goal, which was his first career collegiate goal. A shot from the point went through traffic and Molenaar gathered the loose puck and potted it in the open net to tie the game at 4-4 midway through the period. Walker then capped the heroics with a perfect deflection on a shot from defenseman Seamus Donohue to redirect the puck over MSU goalie Dryden McKay with only 53.2 seconds remaining for the game-winning goal.

As strong as SCSU finished the game, they also started well with captain and defenseman Spencer Meier opening the scoring on the power play only 3:18 into the contest. Sophomore Zach Okabe fired a shot from the right side that McKay saved but Meier swooped in from the blue line to bury the rebound.

The Mavericks briefly tied the game with their own power play goal, but only 10 seconds later, sophomore forward Kyler Kupka restored the Huskies advantage. Walker weaved through the MSU defense and slid the puck to an open Kupka for an easy one-timer into the back of the net.

SCSU took the lead into the first intermission and made it 3-1 only 2:40 into the second stanza when senior forward Will Hammer scored his third goal of the season. Minnesota State misplayed a puck off the wall in their own zone and Hammer capitalized, burying a wrister near-side unassisted.

The Mavericks then began their own comeback with Duehr making it 3-2 midway through the middle period. Three minutes later the game was tied when Nathan Smith scored his second power play goal of the night for MSU, leading to the exhilarating third period and finish.

Despite the win, SCSU was outshot by Minnesota State, 29-22. Senior goalie David Hrenak made several big saves for the Huskies and finished with 25 on the night to backstop SCSU to its first ever Frozen Four win. The teams combined to go a perfect 3-for-3 on the power play.

Kupka, Walker, Hammer and Meier all finished the game with a goal and an assist each for the Huskies. Minnesota State finishes its season 22-5-1, while SCSU improves to 20-10-0.

St. Cloud State will take on UMass on Saturday night at 7 p.m. ET for the national championship with the game televised on ESPN in the United States and on TSN in Canada. The NCHC is going for its fifth straight national championship as a conference, which was last done by the WCHA from 2002-06. 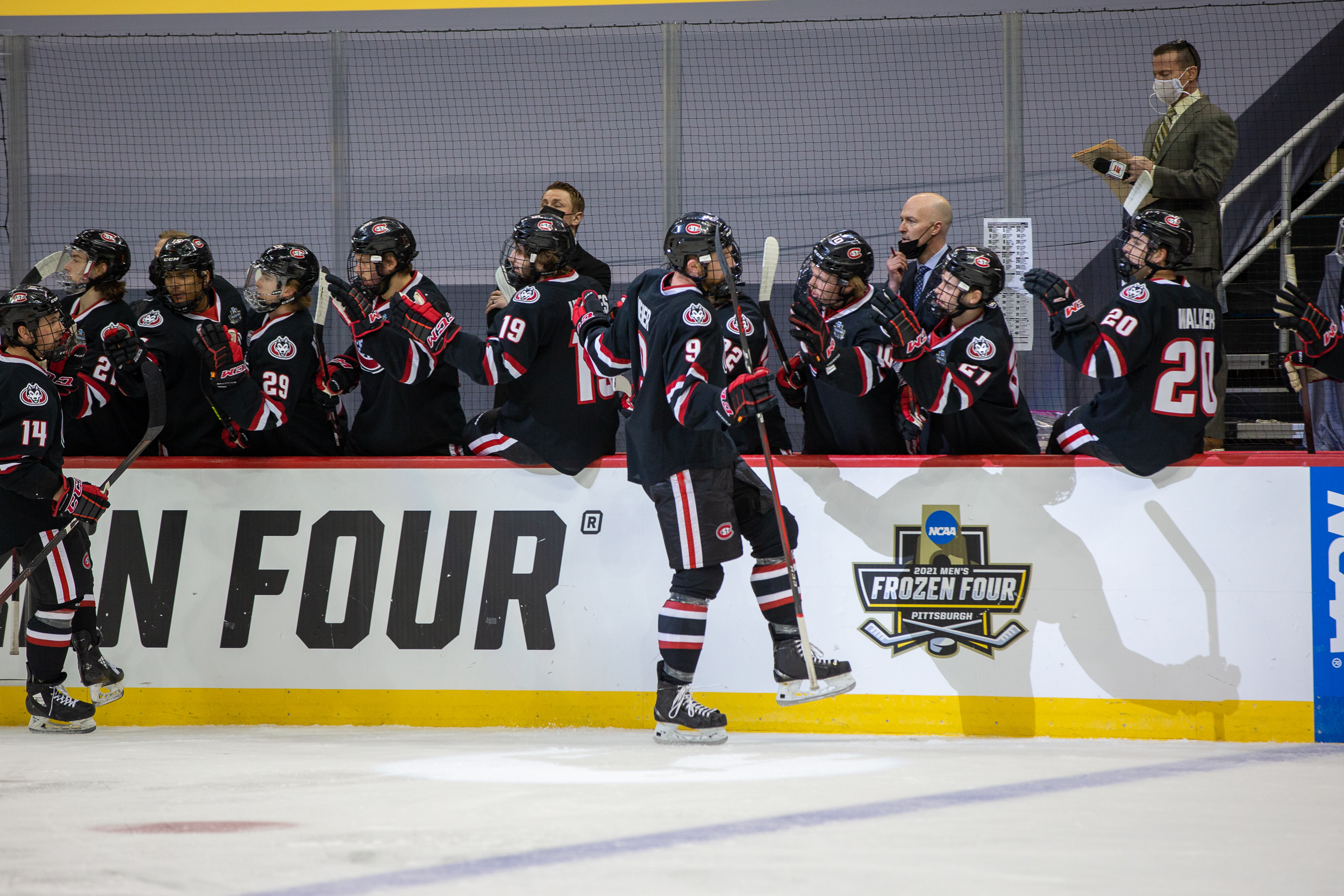