INTERNATIONAL FALLS, Minn. - Dean Blais should have been presented his John MacInnes Award in person in Naples, Fla. in late April. Instead, the former North Dakota and Omaha hockey head coach has spent the past several weeks quarantining with his wife, Jackie, on an island near his hometown of International Falls, Minn., just south of the Canadian border.

Blais was named the recipient of the 2020 John MacInnes Award by the American Hockey Coaches Association (AHCA) back on January 20. But the long-time bench boss, who coached at nearly every level of hockey in America, wasn’t able to be honored at the Celebration of Men’s Hockey dinner, a long-standing tradition at the start of the AHCA’s annual convention. An event thwarted by the COVID-19 pandemic.

But once you learn about the award’s namesake, and what the award stands for, Blais makes perfect sense as this year’s winner. No in-person presentation or run-on speakers needed.

“I think the thing that was most impressive to me was the number of players that graduated when they entered in Michigan Tech and finished their four-year career,” Blais praised of MacInnes. “They didn’t have the NHL after them like they do now after two or three years, a lot of the top players sign and will be gone, but the graduation rate for John’s players when they recruited them was over 93 percent and with high academic standards.”

Not only was MacInnes known for his hard-working players in the classroom, but also on the ice. MacInnes was the coach at Michigan Tech when Blais was still in college playing for the Minnesota Golden Gophers (1970-73).

“When I was at Minnesota and you played at Michigan Tech, you were lucky to get out of there with any points,” Blais reflected on squaring off with MacInnes’ squads in the WCHA.

“I remember he seemed to always have fast forwards and big defensemen. Goaltending, you know that can be good or okay, but he always seemed to recruit big, tough, mobile defensemen. I tried to do some of that myself. Now that the game’s changed where you have puck-moving defensemen, but back in the day it was real physical and going to Houghton you wanted to get out of there with your life,” he chuckled.

“The winning percentage, you got to have a high winning percentage to receive this award, which I think I did at North Dakota and Omaha,” said Blais, who posted a .611 career win percentage over 18 seasons in charge of the Fighting Sioux and Mavericks (408-248-63). “And the other thing is how players perceived you as a coach, plus the graduation rate. That’s really what it’s all about. The amazing things John accomplished, and then for the coaches that received this award in my years of being down in Florida and seeing all the guys who received it.”

“It’s certainly a great honor because of the previous winners of that award and John himself,” said Blais, who was a head coach for high school teams in Minot, N.D., Roseau, Minn. and International Falls before assuming the head job at the University of North Dakota in 1994.

The award itself was established in 1982 and named after MacInnes, who was the original recipient. It recognizes ‘those who have shown a great concern for amateur hockey and youth programs. Recipients must have high winning percentages, as well as outstanding graduating percentages among their former players. Winners of this award have helped young men grow not only as hockey players, but more importantly, as men,’ according to the AHCA website.

“It means a lot because of the man. When I was doing some research I talked to (forward) Pete Roberts, who played at Michigan Tech, and (defenseman) Timmy Watters and some of the guys that played for him, and I had a few stories about John that I was going to tell in Florida when I accepted the award,” explained Blais, noting those will have to wait for another day, sadly.

In addition to his stories about MacInnes, Blais had plenty of people and coaches he was planning on thanking at the AHCA’s Celebration of Men’s Hockey banquet. Starting with the 1999 John MacInnes Award winner in former North Dakota head coach Gino Gasparini.

“My first opportunity was Gino Gasparini hiring me out of Minot, North Dakota to be an assistant coach at North Dakota, a position I held for nine years. And that gave me an opportunity to go to Roseau and be a head coach and win a state championship with Terry Gotziaman, the principal and athletic director,” Blais recalled of the Rams 1990 Minnesota high school state title.

Only two years later he was serving as an assistant coach for Team USA at the 1992 Winter Olympics in France. Blais was thankful for the experience, coaching alongside the late Dave Peterson, who also served as head coach of Team USA in 1988, and current Yale head coach Keith Allain, who was the other assistant back then. Blais also reminisced about good times with long-time USA Hockey general manager Art Berglund.

“We did some amazing things,” Blais said of the 1992 Olympics. “We were not supposed to succeed and we made the medal round. We got beat out and didn’t win any medals, but it was a big step forward for USA Hockey at the time.”

Blais helped the Stars and Stripes to a surprising fourth-place finish in Albertville, while coaching the likes of Keith Tkachuk, Ted Donato and the late Jim Johannson, who later became general manager for USA Hockey. Blais also coached a pair of U.S. National Junior Teams in 2010 and 2012, including guiding Team USA to a gold medal in 2010 in Saskatoon, only its second ever IIHF World Junior Championship title.

“I was blessed with outstanding assistant coaches. I look at my first year at North Dakota with guys like Scott Sandelin and Mark Osiecki, and then it went to Brad Berry and Dave Hakstol, Cary Eades. In Omaha Brian Renfrew did an outstanding job. Then Troy Jutting and Alex Todd, so I was blessed,” Blais hesitated. “Frank Serratore, don’t want to leave anyone out. The outstanding guys that have gone on, like Frank has done at the Air Force Academy. And then Mike Hastings was one of the best assistant coaches in the country, and look now at what he’s done at Mankato. And Scott Sandelin now winning three national titles at Duluth.”

A Hall of Fame-worthy coaching tree no doubt. But the two-time Spencer Penrose Award winner himself (1997 and 2001) couldn’t help but wonder and envision his dream Frozen Four this past season, with North Dakota (coached by Berry), Minnesota Duluth (coached by Sandelin) and Minnesota State (coached by Hastings) all having strong seasons in 2019-20.

“Three of the teams with my former assistant coaches. That would’ve been great,” admitted Blais. “And if I wouldn’t have retired early, I could see Omaha in the mix too.”

Unfortunately, like the AHCA Convention, the 2020 Frozen Four also fell by the coronavirus wayside and the ‘Dean Blais Frozen Four’ was put on hold for another year.

Blais himself made it to four Frozen Fours during his collegiate head coaching career, including guiding North Dakota to a pair of national championships in 1997 and 2000. He also led Omaha to its first Frozen Four in program history in 2015, before retiring after the 2016-17 campaign.

While the titles are nice, it’s some of his top players that really stand out in his mind. Which perhaps makes sense since the MacInnes Award is about developing players and helping them become men.

“I think back to a kid like Zach Parise coming right out of Shattuck (St. Mary’s School) and knowing he’s going to be gone after two years (at North Dakota). I learned a lot from players like Zach Parise and say a Jake Guentzel or Josh Archibald when I was at Omaha more recently,” Blais said. “Just the way they approach the game. You can tell when you recruit these 18-year-olds right out of a place like Shattuck or anywhere in Minnesota, the junior players approach the game just like professionals. They were at the rink early. Wanted to know what they were going to do and how they were going to get better. And just to see their work ethic on the ice and their attention to detail.”

All three have since gone on to successful NHL careers, with Parise a mainstay for the Minnesota Wild, Guentzel a staple for the Pittsburgh Penguins and Archibald now with the Edmonton Oilers – the latter two winning a Stanley Cup with the Penguins. They are three of more than a dozen players Blais helped achieve their ultimate dream of playing in the National Hockey League.

“Looking back at all the years, freshmen come into college kind of wide-eyed and a little immature at times if they’re right out of high school.  The way it is now you play a year or two of juniors so they’re a little bit older, but back when freshmen were first eligible you’d come right out of high school and you’re thrown right in the college hockey scene and it’s tough to really contribute,” Blais explained. “You have to learn systems and learn how the coaches respond and you’re going to school too. Now with computers and the way things are, kids are a lot more techy, and the NCAA clearinghouse everyone kind of comes in on the same page, but back in the day you could really see the maturity in how players develop, both mentally and physically, as well as emotionally.”

It was the younger players’ enthusiasm to learn and all-out effort that kept drawing Blais back to the amateur ranks. It certainly seemed to be a symbiotic relationship for both.

And while Blais is disappointed he won’t receive his John MacInnes Award in person this year like his esteemed predecessors did, he’s got other activities to keep him busy this summer in northern Minnesota -- such as chopping wood. Fishing season opened in mid-May and he’s already been out on the water with Sandelin. The retired bench boss also has other fishing outings planned with former players and opponents this summer.

Here’s hoping Blais reels in a prize-winning catch to mount on his wall. Right next to his well-deserved John MacInnes Award… whenever he gets it.

Dean Blais wasn't presented his John MacInnes Award from @AHCAHockey in late April at their convention like normal,… https://t.co/IlicBVuDLs

RT @USHL: .@fightingsaints alumnus and @SanJoseSharks forward Dylan Gambrell (@D_Gambrell7) drops by and joins the podcast to talk about hi… 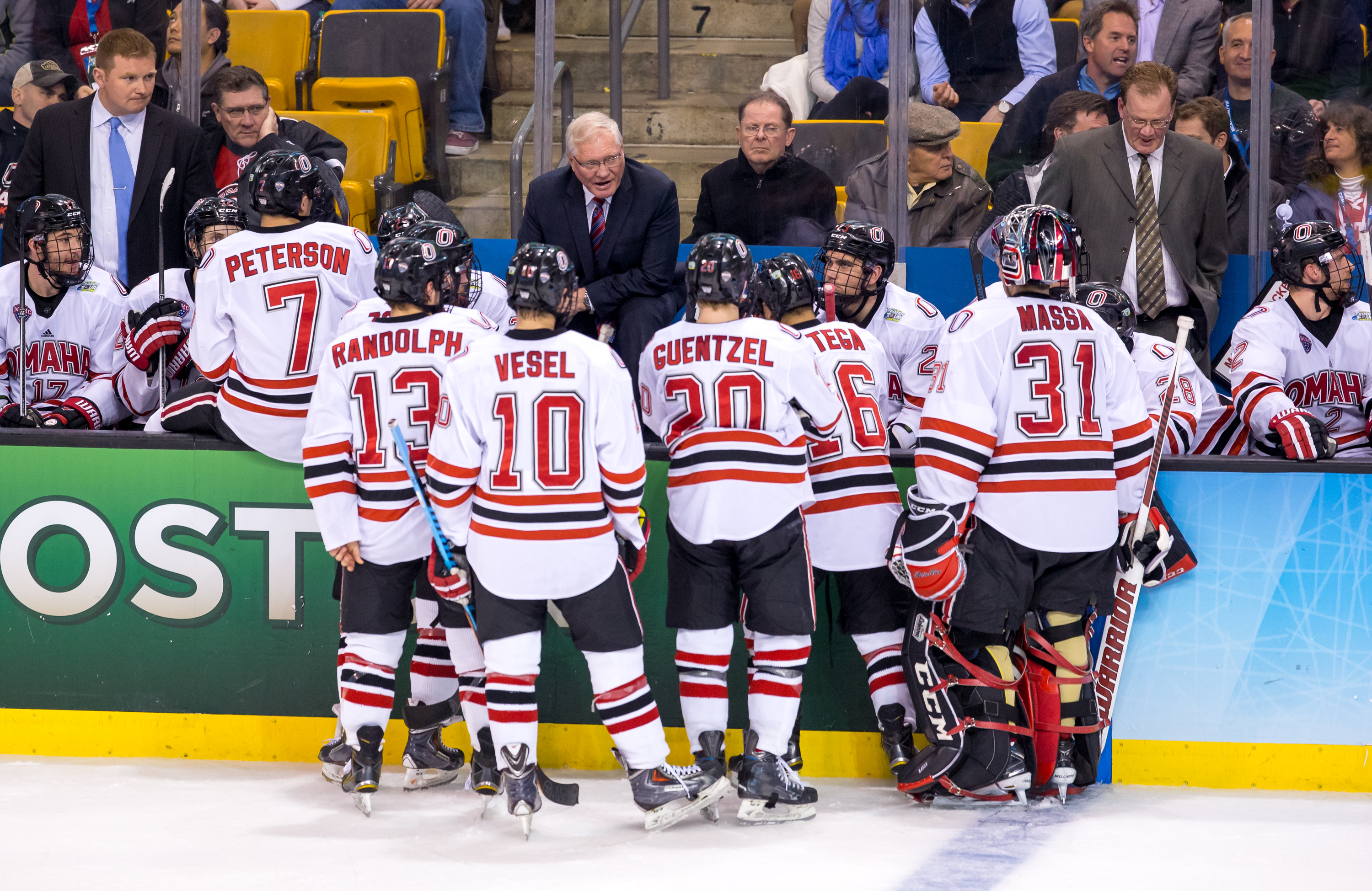 Dean Blais coaching Omaha at the 2015 Frozen Four in Boston.