In the fifth of a unique series of stories showcasing NCHC coaches, players and alumni from a first-person perspective, Omaha sophomore forward Chayse Primeau writes about having to deal with and adjusting to having a famous last name, what it was like growing up with a dad and uncles who played in the NHL and a brother already in the NHL, and how he ended up at Omaha.

OMAHA, Neb. - When I was younger, I felt pressure to live up to my last name.

It was the Primeau name that caused other kids to jeer and random fans to cheer me.

It got under my skin from time to time, but ultimately, I turned it all around and used it for motivation. Now that I’ve grown older and paid my dues, more and more people are starting to recognize me as an individual.

My dad played professional hockey. It’s sort of funny because he never rushed me into the sport. But once I said I wanted to play, there was no looking back. And once I got into it, it was mainly because of him.

Along with my dad, my uncles also played professional hockey. There have been over 2,000 NHL games played between the three.

I always cherished it because it gave me different perspectives on the game from completely different players.

I’d go to my dad with a question and then my uncle in the same night just to gage the difference in opinions. It really helped pave the way for me at a young age.

The same goes for my younger brother, Cayden, as well.

He got his first game in the NHL back in December against Colorado. I was fortunate enough to play a couple seasons with him and share in the pursuit of the family legacy.

Our bond is tethered to memories of playing mini-stick in the basement. Looking back, I’d always be the goalie and he’d be the player. Now, he’s the professional goalie and I’m the player.

It’s funny how that turned out.

Some games would get so heated, and we’d be down there for hours competing.

We always had to win.

But we were always supportive and protective of one another. Chasing the family legacy is more of a dream than a burden, and it has been an honor to walk the journey at his side.

First Time I Touched a Stick

I was about four years old when I picked up my first hockey stick. There was an instant brain connection that this was what I wanted to do with my life. Every picture I have—from age four to thirteen—I had a stick in my hand.

When I was younger, I remember going to the Philadelphia Flyers games to see my dad play. At least that’s what I was supposed to be doing. But I hardly watched the games.

I’d always play mini-stick in the hallway with the other kids during the game. The stick served as the gateway to the sport I’d grown to love as much as my family.

And I couldn’t put it down.

After the games, however, we were a normal family that rarely ever talked about hockey.

“What do you want for dinner tonight?” “Did you finish your homework?”

Those were the sorts of conversations we were having in the car after leaving the rink. All of that stuff.

We talk about a lot of hockey now that we’re older, particularly on the NHL level and other college teams. The love for the game runs deeper than our own experiences.

The Road to UNO

My journey to finally settling in at the University of Nebraska Omaha was filled with twists and turns at every corner.

The recruitment process from multiple schools truly started when I was still playing junior hockey with Team Comcast. After finishing up in the 16-and-under league, I went on to join the United States Hockey League (USHL), where I played for the Lincoln Stars and eventually got traded to the Dubuque Fighting Saints. That journey led me all the way to the front doorstep at UNO.

It was a reminder there is a meaning behind every twist and turn that can’t always be seen until you get to the destination.

I finally understood that meaning during my first visit, when I absolutely fell in love with the place. The campus, facility and coaching staff—it was second to none. Once my heart was set on the destination, all of the other colleges began to fade from existence.

This was my new home. UNO was where I wanted to be.

My all-time favorite hockey memory is when I scored my first goal with the team. Of course, I wish it happened under better circumstances, but nothing can discount the indelible mark it etched into my heart.

We were playing a tough Notre Dame team and losing 8-1. There was a power play with about six minutes left in the game, and I managed to score a goal. I’ll never forget it.

Unfortunately, we still lost the game 8-2. But that’s not the point of this.

We have one of the best fanbases from anything that I’ve ever experienced at the collegiate level. Playing in a great building is one thing, but it has been something else entirely competing for an enthusiastic fanbase that is passionate about the team.

Through it all, my family remains my biggest fans and supporters. Even my dad and brother often make the trip out to watch me play. At least I hope they’re watching and aren’t in the hallways playing mini-stick with the other family members.

The ultimate goal is to continue my hockey career at the professional level, whether that’s in the NHL, AHL or ECHL. That same urge to compete is as strong now as it was when I first picked up a stick at four years old. I guess you could say my family had something to do with that.

After breaking my foot in my first year at UNO, things have gone much smoother in my second season. I’m healthier and we’ve got a good squad that has played really well this year. More importantly, I’m back on the path towards achieving a lifelong dream. It’s the same dream my dad, uncles and brother have all turned into living, breathing realities.

If hockey doesn’t work out, there could be an opportunity for me to take up work with my sister at my dad’s regional box company out of Montreal. That’s my long-term fallback plan. But failing isn’t even a consideration when I step on the ice. The journey has made my heart whole regardless of what the future holds.

With every twist and turn, life serves as its own compass, constantly reminding me that sometimes the chase is more important than the destination. 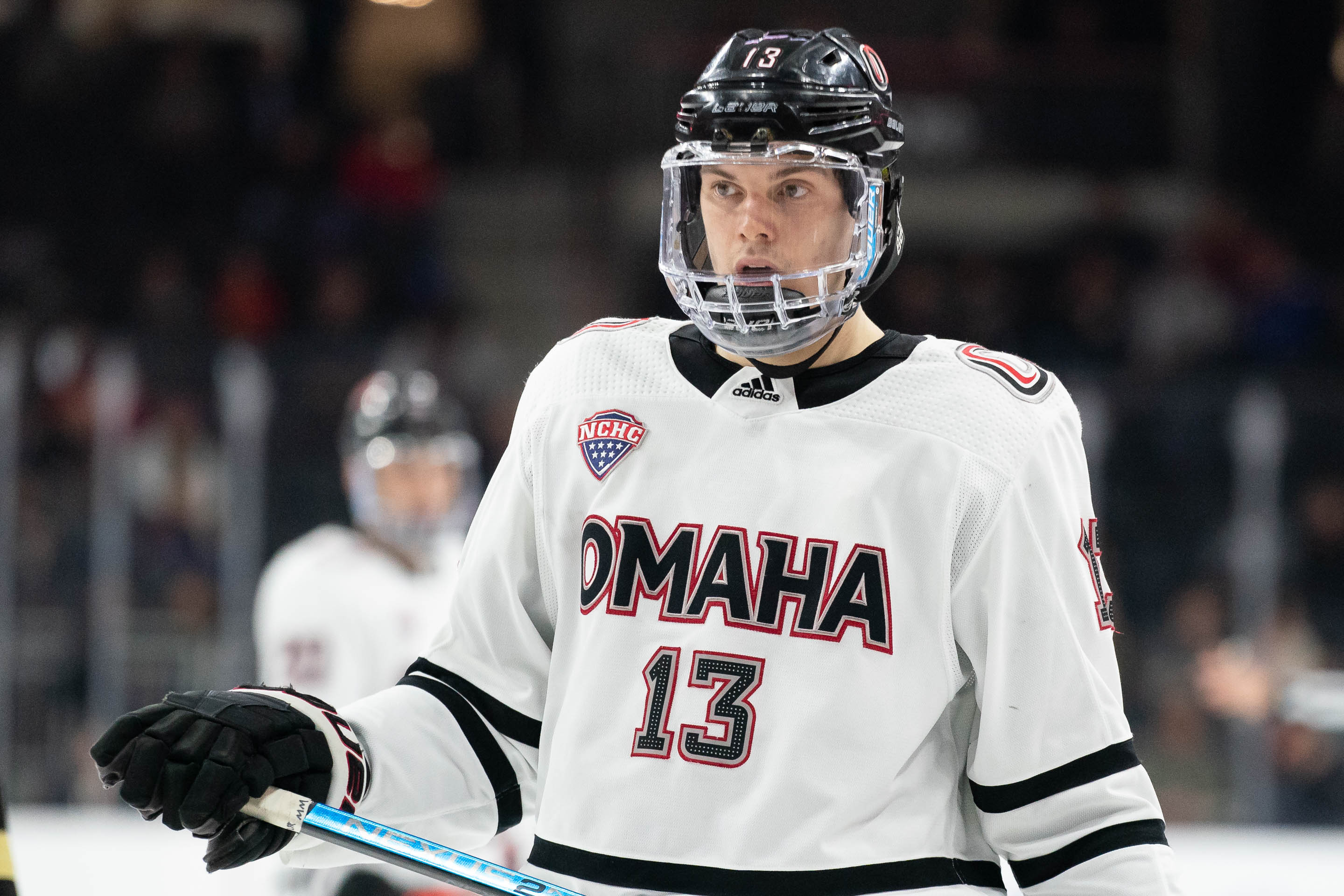 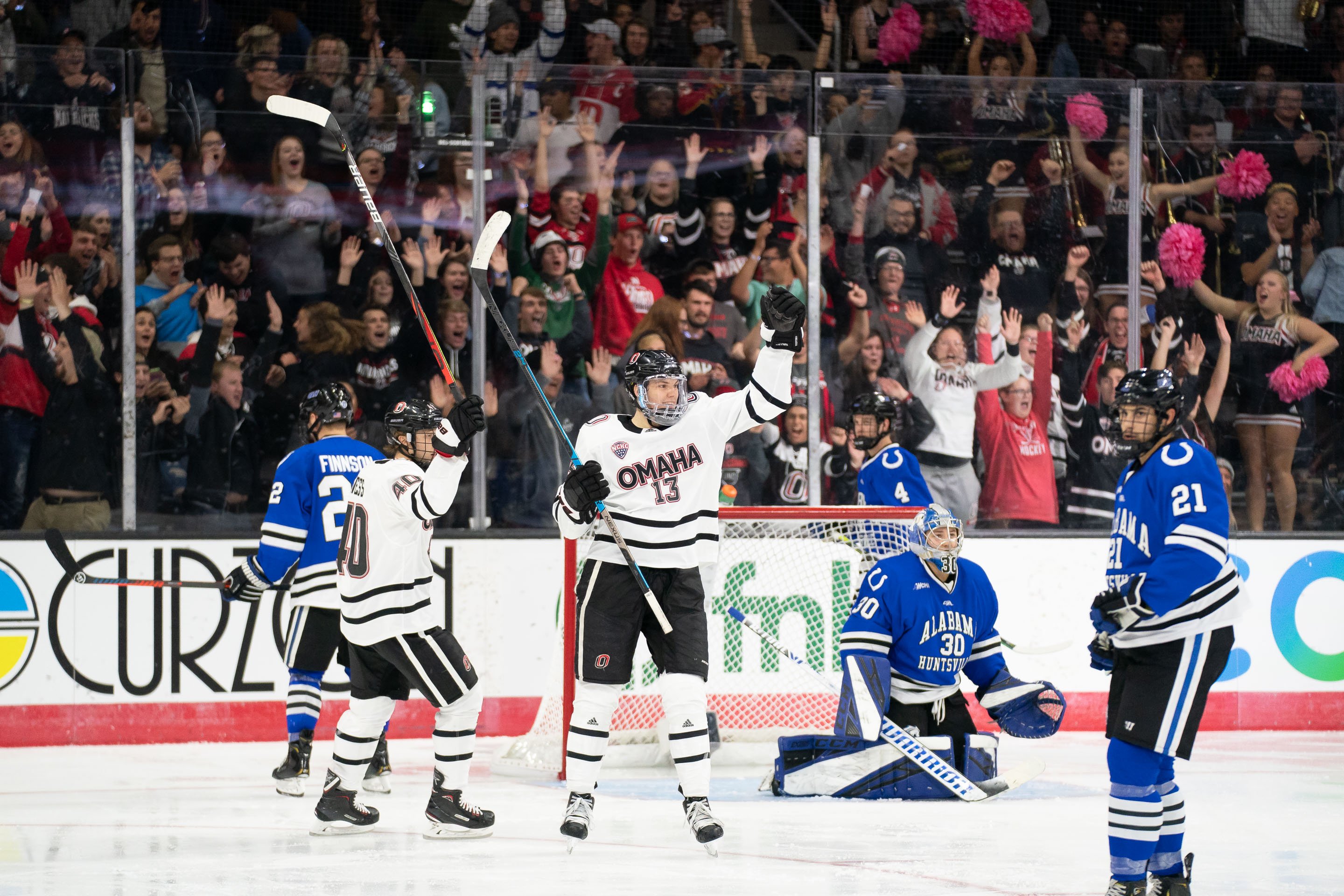 Chayse Primeau celebrates a goal against UAH earlier this season.