In the fourth of a unique series of stories showcasing NCHC coaches, players and alumni from a first-person perspective, North Dakota senior/graduate transfer Westin Michaud writes about his experience at Colorado College and helping rebuild that program, why he felt UND was best for his future academic and hockey career as a grad student, and the differences between the two.

Colorado College is beautiful, with all the mountains around you. You get yourself a great education and are front and center at a rebuild where you shoulder a lot of responsibility in reshaping a team.

North Dakota has state-of-the-art facilities and resources. You are placed on the best possible route for completing your schooling, and man, nothing can beat those fans.

Two different experiences, each with their own benefits.

I’ve had the opportunity to reap the rewards at both.

Thanks to my time playing at both Colorado College and now at North Dakota, I believe I’m well-equipped to take my game to the pros.

No doubt, you get better when you’re playing in the best conference in the country, and I’ve gotten to see that from two teams’ perspectives.

While I’ve really become the player I am today because of my college career, my road of getting to college was a lot bumpier than you may expect.

I like to say that I always had the heart and the drive, I just needed time to mold myself into a great hockey player.

Coming out of high school, I had pretty good stats and skill, but I was a little overweight, maybe needed to lose 15 pounds or so.

It was a wake-up call for a lifestyle change, which I found in Corpus Christi, Texas.

I went down there to play in the North American Hockey League (NAHL), a juniors league that develops young hockey talent.

The talent at the league was pretty high.

And in order to compete with those folks, I had to focus on the fundamentals. Becoming a better skater, hitting the weight room, fine tuning my deficiencies.

It was a grind, but that’s what you got to do.

I tried out for the USHL after but got cut by all 8 or 9 teams I tried out for. That was a big blow to me, not going to lie. But it solidified my passion.

I returned to Corpus Christi where I had a great season. I actually was second in the league in points with 75.

All my hard work was paying off and colleges were taking notice.

Colorado College ended up being the perfect school for me out of the NAHL. Coach Haviland really made me believe I would be a part of something special, and I wanted to help bring about change to the school.

See, Colorado College had gone through some pretty tough years and my class took it upon ourselves to rebuild the program and get them back on the winning track.

It’d be a little while before I could make my personal stamp though.

I tore my ACL my freshman year, causing me to miss that entire first season.

That really hit me hard, like a ton of bricks. Not only was I playing great hockey at the time, but the recovery process to get me back to full strength was a tedious one.

While I did play my sophomore year, for example, I only tallied about 13 points, and never felt 100 percent on that knee.

Finally, heading into my junior year, I started to feel more like myself, and senior year is when I took off. Not only was I playing healthy, but my teammates and I clicked never better.

Being with that class, those guys, gave me some of the best hockey memories I have.

But the time was coming to end, and I knew that my next step was graduate school.

And with one year of eligibility left, the one question was...

I had a lot of schools interested when I went into the transfer portal. But I knew I wanted to stay in the NCHC.

North Dakota was a school that had piqued my interest because of how they recruited me. Coach Berry got on a plane and came out to see me. That was so cool. It showed they really wanted me.

I actually have a pretty neat personal connection to North Dakota as well.

When I was little, my dad and I came here for a tournament, and we were able to take in a game.

My dad and I just loved everything about it - the fans, the arena, the atmosphere. I even remember him saying to me: “Hopefully, one day, you’ll play here.”

At that game, I got a Fighting Sioux (before we were the Fighting Hawks) sweater that I’ve kept to this day. It’s still currently hanging on my wall.

Today, I can confirm that all of those things my dad and I thought about North Dakota are true.

The fans are unbelievable. This town runs on its love for hockey. The way they fill up the place for us and are always buzzing about it in the streets, is pretty surreal.

The arena, as well as all the facilities around it, are top notch, which makes it easy to go to practice or suit up for a game.

I’ll be completing my graduate degree this year before beginning my doctorate program online in the fall.

They set me up with the capability to further my studies, wherever I am, even if I’m playing pro hockey.

But aside from academics, I also came here for one other big reason – to win a national title.

Our team’s drive to win that title really makes it easy to gel with them, even though it’s my first year here.

Sharing that common mindset makes chemistry a lot simpler too, and I believe we are in a good spot to hopefully turn this big dream into a reality.

Soon, I get to have a big reunion. I have it circled on my calendar; January 31 and February 1. Games against Colorado College.

I’m looking forward to seeing my old teammates and coaches, but it’ll mostly just be a fun chance to play another two games of hockey.

Both schools have done so much for me.

They gave me a great education and saw something in me when I had the hardest decisions to make.

Mostly though, they helped shape me into the hockey player I am today.

And for that, I'll be forever grateful. 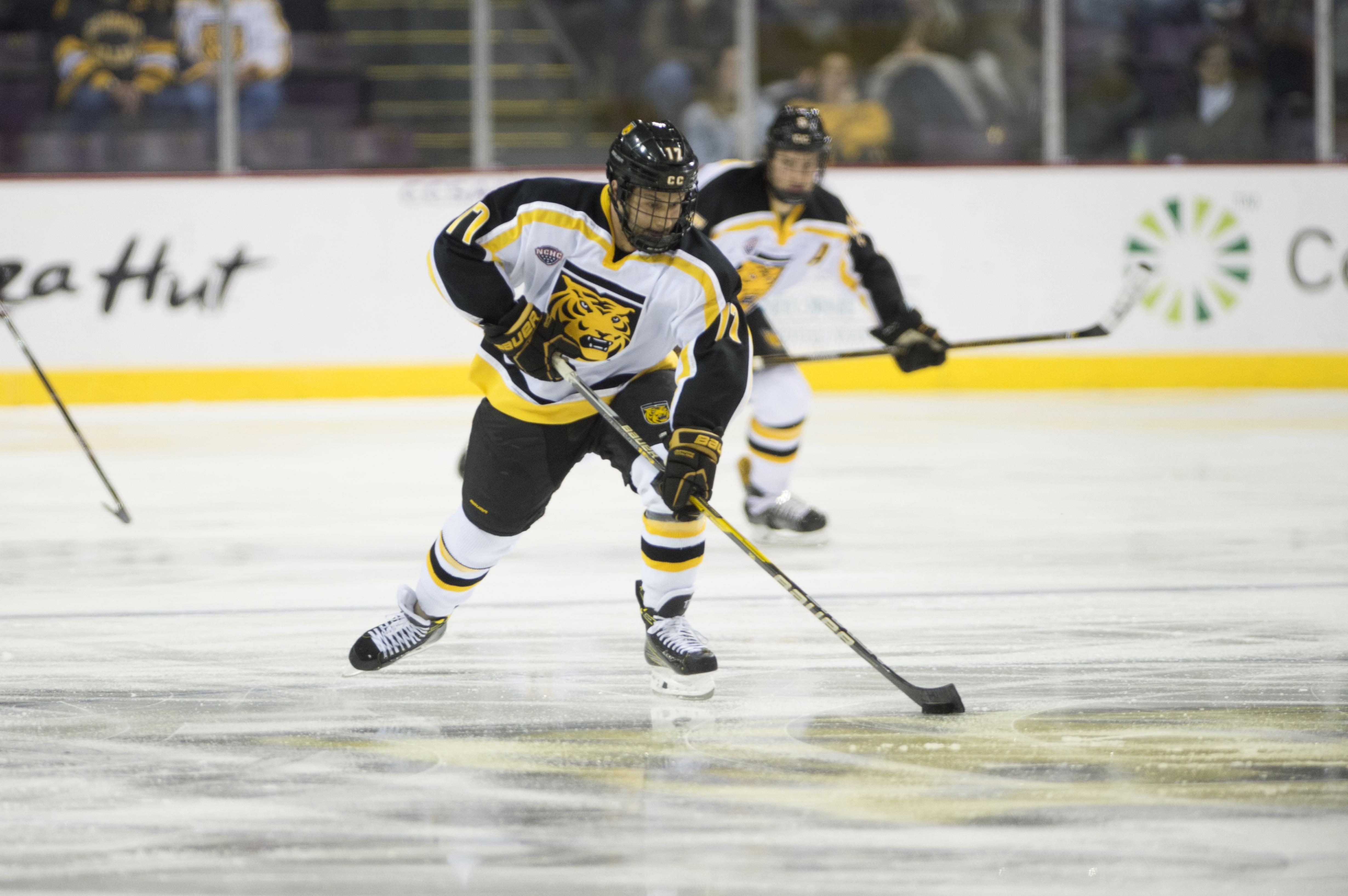 Westin Michaud skating for Colorado College, where he earned his undergraduate degree in 2019 and played for the Tigers for three seasons after an injury as a freshman. 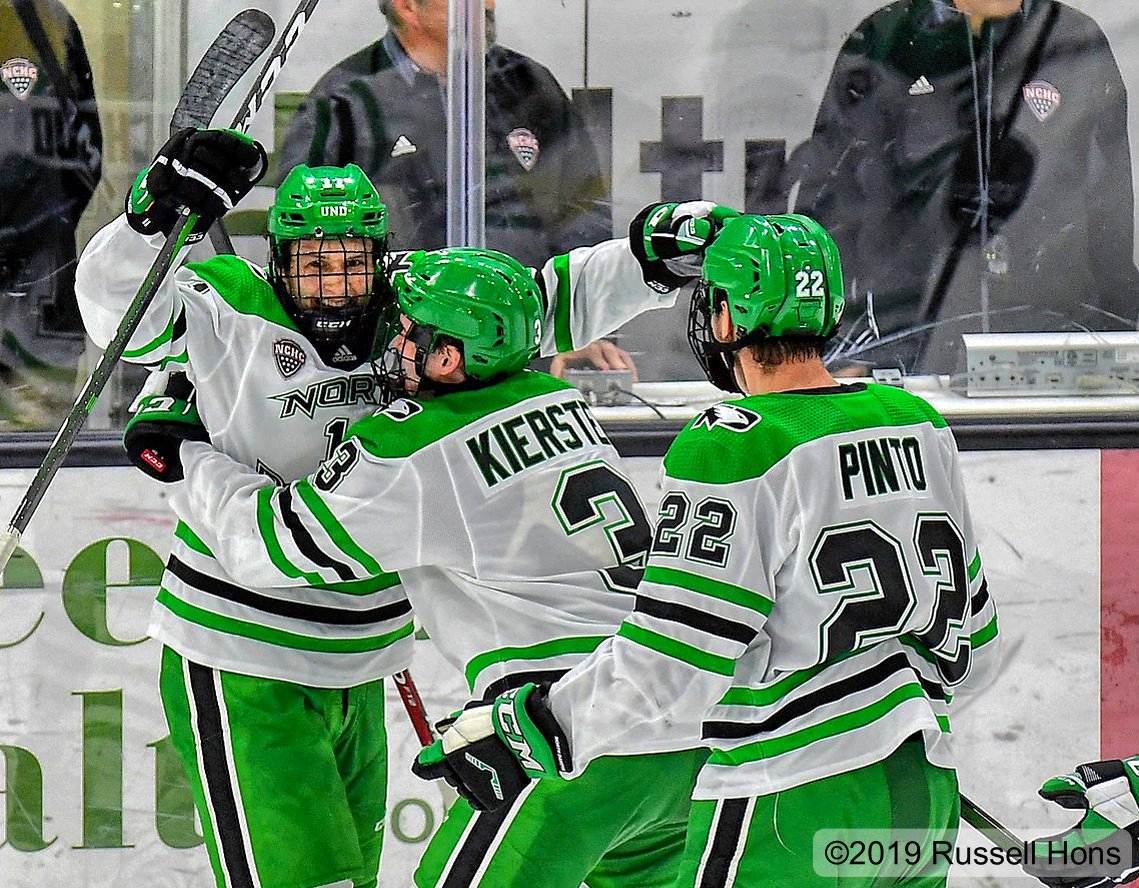 Westin Michaud celebrates with teammates after scoring a goal. Photo by Russ Hons.