With Saturday’s NCHC action complete, we’ve reached the halfway point in the pursuit of the Penrose Cup and top-ranked North Dakota has opened a comfortable eight-point lead in the NCHC standings. UND can thank St. Cloud State for some of its big cushion, as the Huskies completed a sweep of in-state rival and No. 8/8 Minnesota Duluth, who sits in second place, with a 2-0 victory. Junior goalie David Hrenak recorded his first shutout of the season to backstop SCSU to its sixth straight win over the Bulldogs in St. Cloud, as the Huskies broke a scoreless deadlock with 95 seconds remaining in regulation.

Also finishing off a sweep on Saturday was Western Michigan, which downed Colorado College, 6-2, in Kalamazoo. Senior forward Dawson DiPietro tallied his first career hat trick and classmate Wade Allison chipped in four points in the win for WMU, which took 11 of 12 points from the Tigers this season.

No. 1/2 North Dakota boosted its lead in the NCHC standings with a 5-3 win at Miami. UND overcame a two-goal deficit for the second straight night and senior forward Cole Smith broke a 3-3 deadlock with 1:04 left in regulation on a redirect to cap a five-point weekend for the Fighting Hawks.

Also for the second straight night, No. 4/4 Denver and Omaha skated a tie, as DU freshman Bobby Brink scored in the final 15 seconds of regulation to tie the Mavericks, 2-2, and force overtime. After a scoreless 5-on-5 overtime, DU senior defenseman Michael Davies scored in 3-on-3 overtime to give the Pioneers the extra point in the NCHC standings and a four-point weekend. Denver is now riding a NCAA-best nine-game unbeaten streak (6-0-3).

UP NEXT
Conference play continues next weekend with all eight NCHC teams in action once again in four two-game series. The top two teams in the conference collide in Duluth, as No. 1/2 North Dakota tangles with eighth-ranked Minnesota Duluth. Miami and Western Michigan both remain at home, as the RedHawks welcome No. 4/4 Denver, who stays on the road for a second straight series, while the Broncos entertain St. Cloud State. The fourth series next weekend has Omaha visiting Colorado College for a pair. Friday’s UND at UMD game is on CBS Sports Network, while the other seven games next weekend will be available on NCHC.tv. 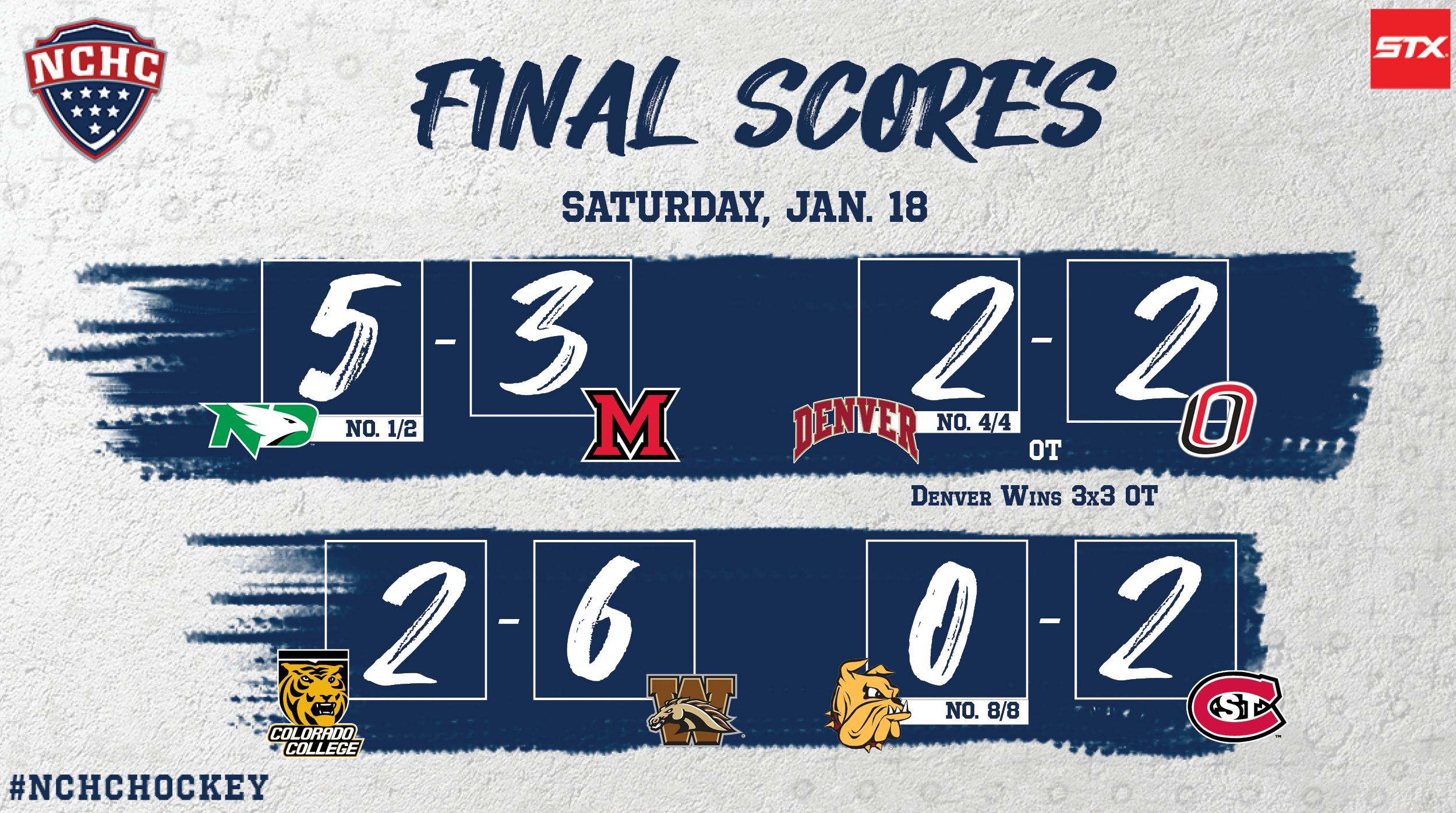