While it was already a full slate of games Friday night, two of the games went well beyond regulation, both ending in ties and a shootout, including the longest sudden-death shootout in NCHC history. St. Cloud State and Western Michigan were the only teams to pick up victories Friday, while home teams went unbeaten (2-0-2) on the night. The Huskies upset No. 8/8 Minnesota Duluth, 2-1, behind a couple of fortunate bounces and strong goaltending, while the Broncos jumped out to a 3-0 lead and held off Colorado College for a 5-2 victory in Kalamazoo.

The other two games resulted in overtime ties with the road team winning a shootout. In Oxford, top-ranked North Dakota and Miami skated to a back-and-forth, 4-4 overtime tie, with the RedHawks jumping out to a 2-0 lead, then scoring late to tie, before UND took the extra NCHC point in the second round of the shootout. At Baxter Arena, a goaltending duel ended in a 1-1 draw between No. 4/4 Denver and Omaha, with UNO using a short-handed goal to tie the game, but the Pioneers nabbed the extra NCHC point in the fifth round of the shootout, which is the longest shootout since the NCHC switched to the sudden-death format with 3-on-3 overtime in 2015-16.

UP NEXT
All four NCHC series conclude Saturday, with all four games available on NCHC.tv. The day starts early with in-state rivals UMD and SCSU colliding again in St. Cloud on Hockey Day Minnesota, with puck drop at 4:07 p.m. CT and the game also on TV on FOX Sports North PLUS. The CC at WMU and UND at Miami series both wrap up starting at 7:05 p.m. ET, while the final series gets underway at 7:07 p.m. CT as Omaha goes for its first win over Denver in 18 tries. 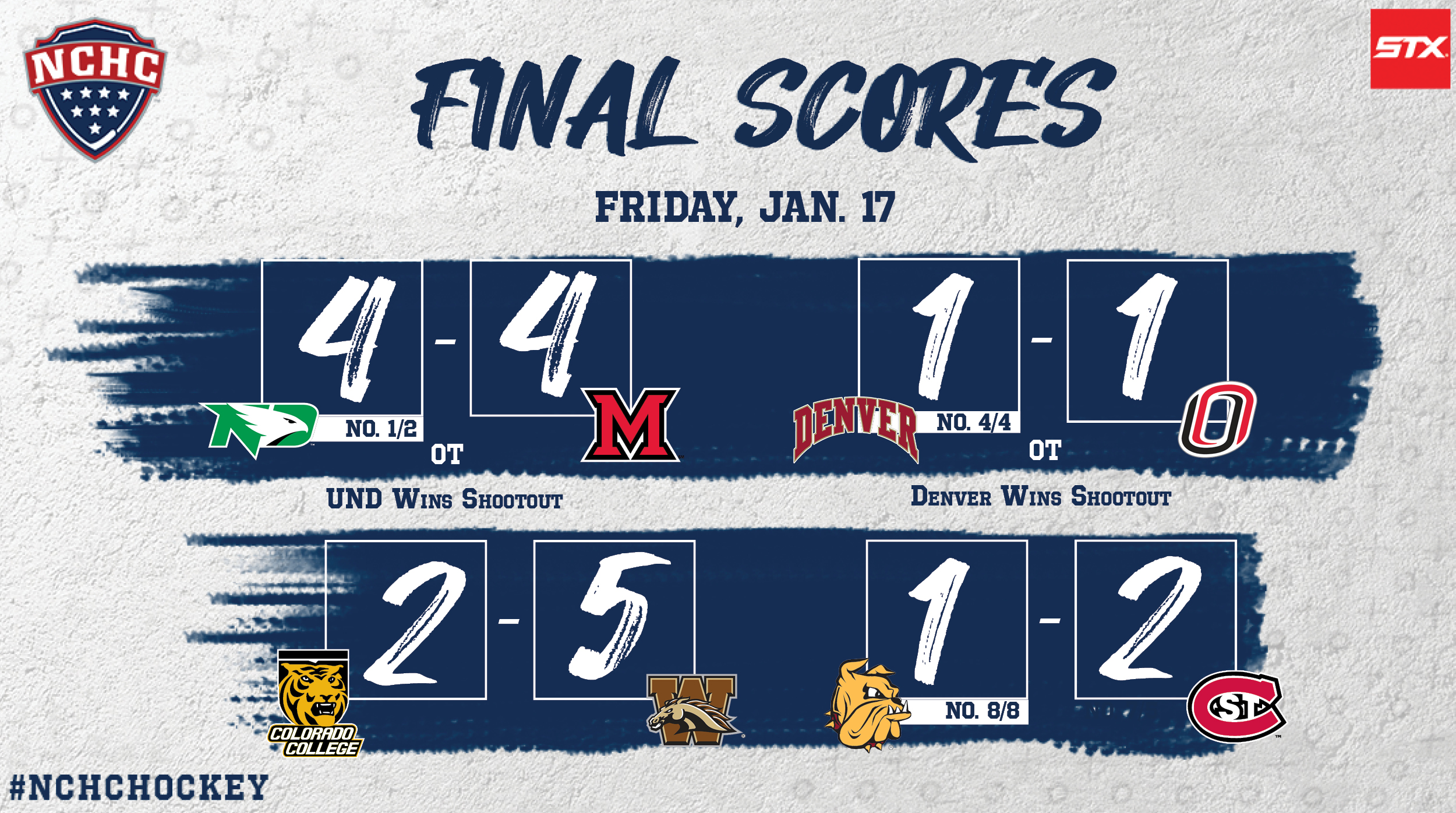 RT @BMileskiKFAN: NEW BEYOND THE POD! @UNDmhockey Head Coach Brad Berry joined @patmick2626 and me to chat about his program and playing i…

A lot of planning to get here. A lot of work still to be done But we can't wait to drop the puck on #NCHCHockey De… https://t.co/ZoY1CPcVAc