Justin Lee: A Shock Of Culture

In the third of a unique series of stories showcasing NCHC coaches, players and alumni from a first-person perspective, Denver freshman defenseman Justin Lee writes about his transition from growing up on a farm in Manitoba, to living in Denver now, and the adjustment he's made in the big city.

DENVER - Most people are either small-town or big-city people. I've always gravitated towards small towns. But, recently, I've been living in a big city, and while it took some getting used to, I came to enjoy that lifestyle as well.

I grew up in the small town of Waskada, Manitoba. Population: Oh, around 200 people or so. Maybe less. You have to go two or three miles to really see anyone. It’s mostly farmland, but it’s home to me.

Now, I’m in Denver, Colorado. Population: A whole lot bigger. Google tells me around 600,000 people. It’s by far the biggest city I’ve ever lived in. You see hundreds, if not thousands, of people every single day. It’s very different than where I grew up, but it’s also become home.

From the beginning as a farm kid in small-town Canada to my life now at the University of Denver, one thing has always stuck with me – hockey.

Not a Whole Lot to Do

I grew up on a grain farm with my family. This has always been my life. And I love everything about it.

Wake up early. Put in hard work. Go to bed. Do it all again the next day.

It may seem monotonous to some, but I love the routine of it. It’s been a part of my family for so long.

In fact, whenever I’m done playing hockey, that’s what I know I’m going to do. It’s just who I am.

Outside of farming, though, there wasn't a whole lot to do. With only a couple hundred people around, my options were pretty limited.

Thankfully, there was hockey.

As a kid, I was always at the rink, playing a game with whoever was available or working on stick handling and other skills if I was by myself. All my free time was spent at the rink.

When I picked up a hockey stick for the first time as a young boy, I could have never imagined all the great opportunities and success that this sport would bring me.

But I just loved the sport and wanted to get better. And well, so I did.

Eventually, I started to realize that hockey could be something to do on a bigger stage.

A Change of Scenery

And that ‘bigger stage’ was inevitable if I wanted to get better.

So, in tenth grade, I moved away from home to play hockey at a higher level. At the boarding school, I got to play more competitively, which helped open the doors for some junior league hockey options.

I first played in the MJHL (Manitoba Junior Hockey League) before making another big move – playing in the USHL.

Initially, it was difficult being away from home, especially since I was used to that small-town life. Still, I quickly made friends and bonded over our shared love of hockey.

My first stop took me to Lincoln, Nebraska. I loved playing there for a couple of reasons.

The league was super competitive. You had to bring it every night. Those guys were excellent and also really hungry like I was. The competition was top notch.

However, a non-hockey thing really helped me feel at home in Nebraska as well.

Since we had a lot of free time outside of practice and games, I tried my hand at something new – corn farming.

I couldn’t pass up the opportunity to see if there was a difference between corn and how we farm grain back home.

Turns out they’re very similar, which I thought was neat.

As much as I love hockey, it definitely helped to have something outside of the sport that reminded me of home.

After spending most of the season in Lincoln, I was traded to another USHL team in Fargo to finish the year. Again, it was an excellent chance for me to improve little parts of my game and get noticed by college scouts.

Thankfully, all the work and moving paid off.

But the next chapter in my life would come with the biggest culture shock of all.

When I was on my visit at Denver, I instantly fell in love with the school and hockey team, and committed during that visit.

While the campus and facilities seemed perfect, the city itself would be a different story.

Don’t get me wrong, there was nothing off about Denver. It was just so different from what I was used to. The farm. The peacefulness. The isolation. Even towns like Lincoln and Fargo seemed small in comparison to Denver.

It was just kind of crazy to me how big the city was. The campus is basically right downtown, so there are people and buildings everywhere. It was a strange transition for me.

Every Day is My Favorite

But with my first semester in the books now, I not only got more used to it, I even kind of like it now.

It does, of course, help that I have amazing teammates.

Sometimes it can be challenging to come together as a team, especially when you're adding new freshmen. But thanks to an early road trip, we got the opportunity to bond from the get-go.

For the first series of the year, we went to Fairbanks, Alaska.

It was a long trip, but it gave us a chance to get to know each other better off the ice and work on that chemistry.

We won both games of that series, giving us an early undefeated record and a sense of confidence going into the season.

After that series, we all felt more connected, and I believe that's helped us.

Everything has made this first semester such a fun one. It’s hard to pick a favorite moment because they all are. Every day has been my favorite part of the season.

In a conference like the NCHC, we're getting constantly challenged. And we embrace that.

We are always chasing that goal of a national championship. And if that’s what you want to do, well, you have to beat the best of the best.

Yeah, these last few years have been a grind.

I've been all over Canada and America, continually changing teams to pursue my hockey dreams.

It’s helped me realize that I have two homes.

Waskada, the place that raised me and will always be a part of me.

And Denver, the place where I came to win and become the best hockey player I can be. 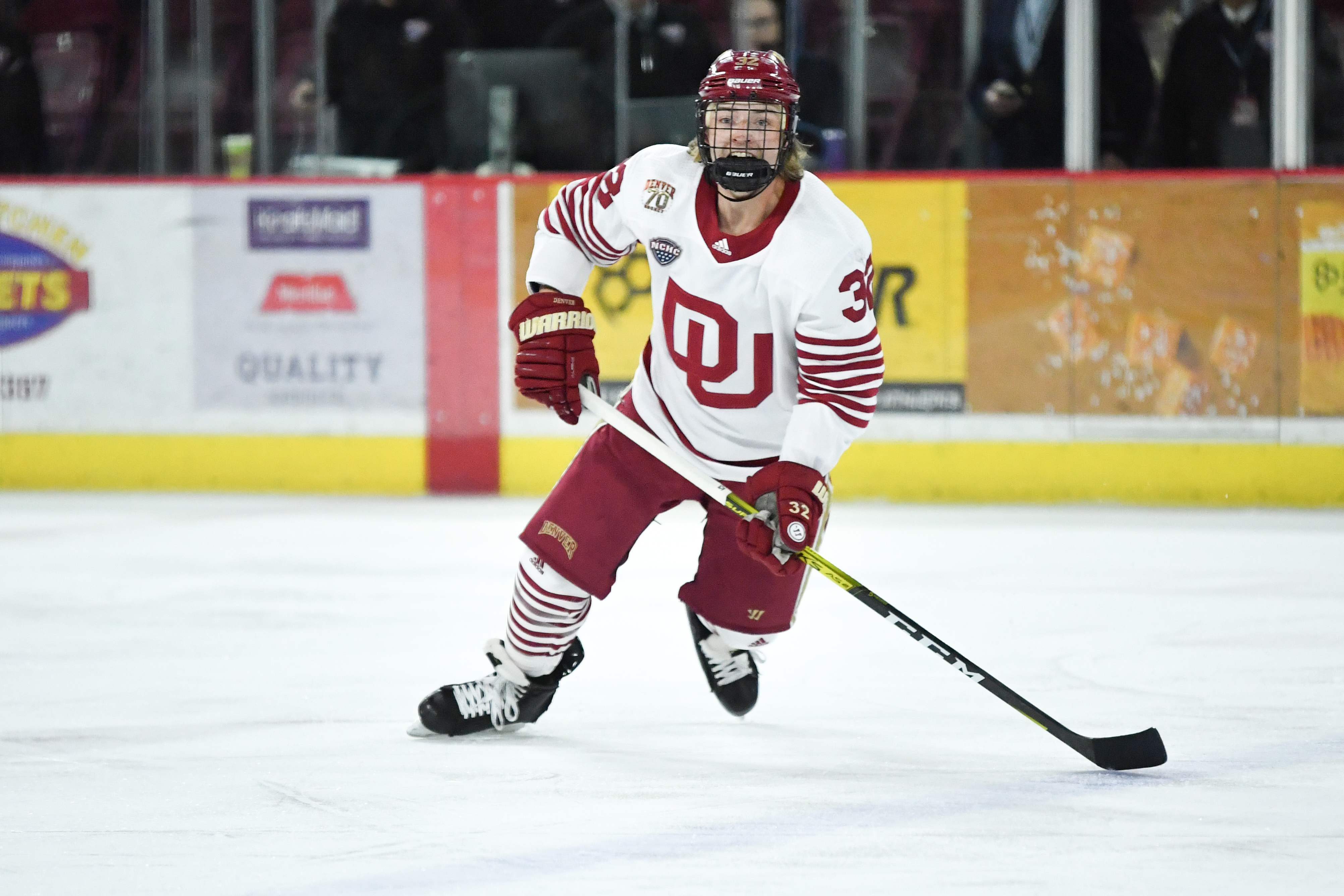 DU freshman Justin Lee grew up in the small town of Waskada, Manitoba, with roughly 200 people, before making the jump to a major metropolis in Denver.