Home teams went undefeated in games involving an NCHC team Saturday, with a pair of NCHC teams finishing off weekend sweeps while NCHC teams went 2-1-0 in non-conference play overall Saturday. Top-ranked North Dakota continued to roll, once again pulling away Alabama-Huntsville by scoring the game’s final three goals for a second-straight 5-2 win and a weekend sweep. The win extended UND’s unbeaten streak to 15 games and win streak to nine games, while it was their record 13th straight home win. Also finishing off a series sweep was No. 7/5 Denver, which used a three-goal second period to erase a two-goal deficit and knock off No. 9/9 UMass, 4-3, for the Pioneers fourth straight win. Earlier in the day Saturday, Omaha outshot Maine in an afternoon matinee, but the Black Bears scored in the final three minutes to break a 2-2 tie and edge the Mavericks, 3-2, in Portland, Maine.

No. 1/1 NORTH DAKOTA 5, ALABAMA-HUNTSVILLE 2
Behind the same score as Friday, top-ranked North Dakota completed a sweep of Alabama-Huntsville with another 5-2 victory Saturday at Ralph Engelstad Arena, picking up its 13th straight win at home to set a program record at The Ralph. The win also pushed UND’s unbeaten streak to an NCAA-best 15 games (14-0-1) and win streak to nine games.

North Dakota (16-1-2) grabbed a 1-0 lead early in the game when senior forward Westin Michaud deflected a shot from the blue line from junior defenseman Matt Kiersted. Junior Collin Adams then doubled the lead a few minutes later on the power play, going top corner from the right circle off a feed from classmate Jordan Kawaguchi, who was below the goal line.

UAH (1-16-3) cut the deficit in half with seven minutes left in the first frame with a sharp wrister from Connor Merkley, as UND led by one after 20 minutes. The Chargers then tied the game only a minute into the second period when a puck squirted free from sophomore goalie Adam Scheel and was flipped in the net. The Fighting Hawks regained the lead for good two minutes later, however, when junior forward Jordan Kawaguchi gathered a rebound along the goal line and went between his legs to stuff the puck in the net from a sharp angle for a highlight-reel goal.

North Dakota gave itself some breathing room three minutes into the final frame when freshman forward Ethan Frisch blasted a shot from the high slot for his first career goal to make it 4-2. Freshman forward Shane Pinto, fresh off his return from the World Junior Championship, sealed the victory late with an empty-net goal. UND outshot Alabama-Huntsville, 38-13, in the win and was 1-for-5 on the power play.

No. 7/5 DENVER 4, No. 9/9 UMASS 3
Using a three-goal second period and strong special teams, No. 7/5 Denver overcame an early two-goal deficit to defeat No. 9/9 UMass, 4-3, Saturday night at Magness Arena, completing a weekend sweep of the Minutemen (13-6-1). With the win, DU (13-4-3) also stretched its win streak to four games and exacted some revenge after falling to UMass in last year’s Frozen Four.

The Minutemen jumped out to a 2-0 lead in the first half of the first period on goals by Bobby Trivigno and John Leonard, the latter on the power play and both assisted by Zac Jones. DU cut the deficit in half with a power play goal of its own, as senior forward Liam Finlay fired a slapshot that went top shelf over the goalie’s glove to get Denver on the board.

The first half of the second period was all Denver’s penalty kill, killing off four minor penalties, including an extended 5-on-3 power play, to keep it a one-goal game. DU then seized momentum, striking three times in a span of 2:20. The Pioneers pulled even with 5:30 left in the second stanza when sophomore forward Emilio Pettersen blasted a one-timer in the high slot. Less than two minutes later, DU grabbed its first lead of the game when freshman forward Bobby Brink, just returning from the World Junior Championship, connected on a one-timer in the circle from sophomore Brett Stapley and his shot snuck through UMass goalie Matt Murray’s five-hole. Only 33 ticks after that, Denver doubled its lead when sophomore forward Cole Guttman got a piece of junior Kohen Olischefski’s pass in front of net and the puck bounced off a UMass player’s stick and in the goal to make it 4-2.

The Minutemen did get back within one with three seconds remaining in the middle period with a snipe from Jack Suter. In the final two minutes of the third period with DU still holding a 4-3 lead, UMass earned a power play and pulled Murray for a 6-on-4 advantage, however Denver’s defense held strong to prevent the tying goal and preserve the win. DU freshman goalie Magnus Chrona totaled 39 saves in the win, as UMass outshot Denver, 42-37. Special teams were key, as well, as DU went 2-for-4 a man up and finished 7-for-8 on the penalty kill.

MAINE 3, OMAHA 2
Playing on a short turnaround in a different city after the two teams tied Friday night in Orono, the University of Maine scored a late goal in the third period to edge Omaha, 3-2, Saturday afternoon in Portland, Maine.

The Mavericks (8-9-3) started strong, grabbing a 1-0 lead with 5:50 left in the first period when sophomore defenseman John Schuldt scored his first career goal. The Black Bears (10-8-4) grabbed the lead though with a pair of goals in the middle of the second period. Samuel Rennaker tied it off a feed from Eduards Tralmaks, while Tralmaks then made it 2-1 Maine only 3:18 later with his first goal of the day. With 3:31 left in the second stanza, senior forward Tristan Keck pulled Omaha even when he roofed a shot off an assist from junior forward Martin Sundberg.

The game remained level at 2-2 until Tralmaks snuck behind Omaha’s defense, took a pass and stuffed a shot past the outstretched leg of freshman goalie Austin Roden for his second goal of the game. The Mavericks then pulled Roden for an extra attacker over the final two minutes, but couldn’t find an equalizer and fell by a goal. Omaha outshot Maine, 34-27, despite the loss, but struggled on the power play, going 0-for-6 on the man advantage.

UP NEXT
One game is on the schedule Sunday, as No. 19 Western Michigan hosts No. 15 Notre Dame at 5:05 p.m. ET in the finale of their home-and-home series. The former CCHA foes tied 1-1 in South Bend on Friday.

Next weekend, conference play resumes with all eight NCHC teams in action as Miami visits Colorado College, St. Cloud State heads to Denver, UND entertains Omaha and Western Michigan is at Minnesota Duluth. All nine games, including Sunday’s game, can be seen on NCHC.tv. 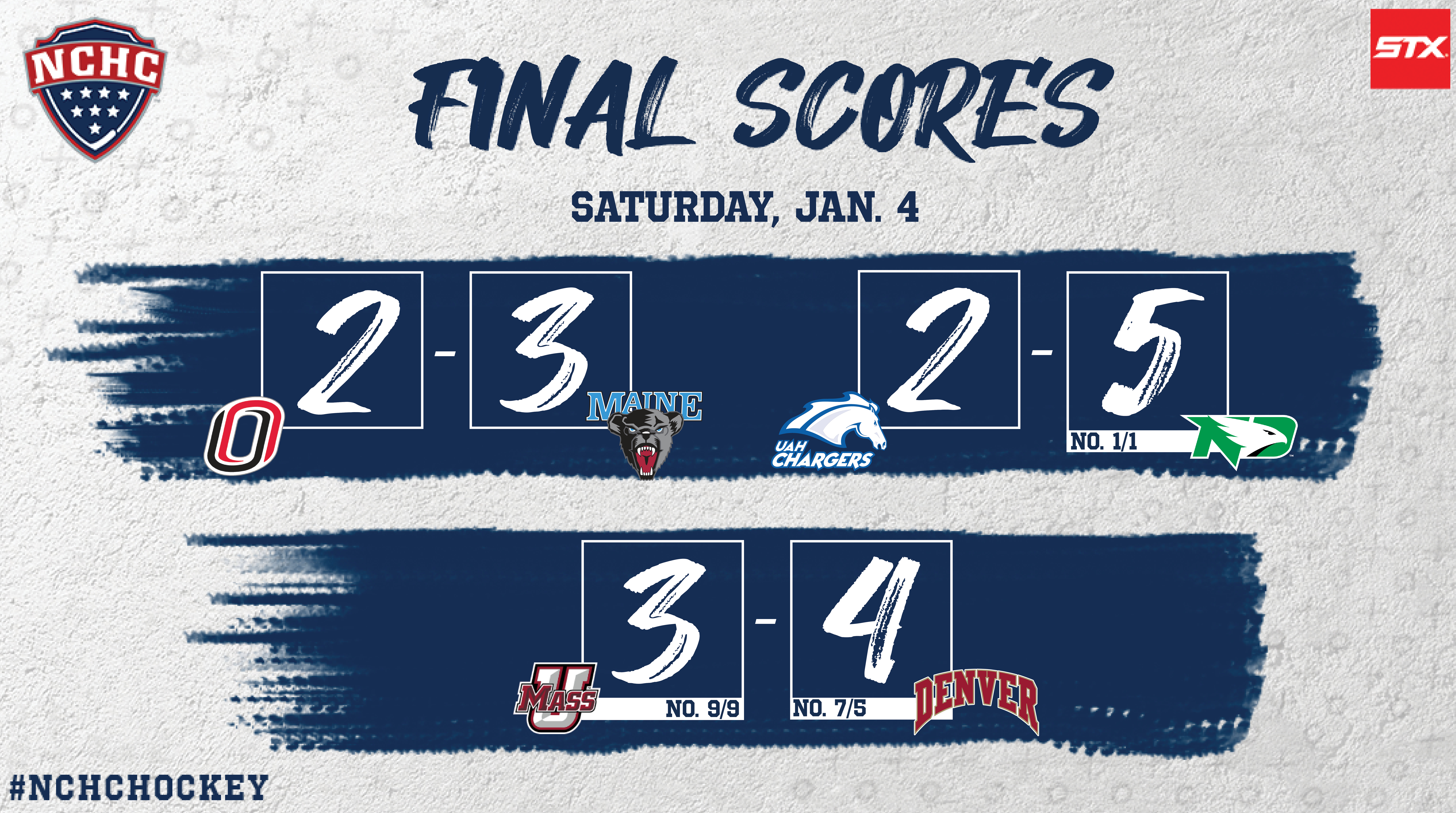 Despite outshooting Notre Dame, @WMUHockey fell in the series finale as the Irish scored all four goals in the 2nd… https://t.co/qLCQ9q13ZK