Bulldogs Sweep, Miami Wins on Road to Close Out 2019

On the final night of action in 2019, the NCHC went out with a bang, going 2-0 as Miami and No. 10 Minnesota Duluth combined to pick up a pair of non-conference road wins Monday. The RedHawks, who hadn’t played in 23 days, doubled up in-state rival and 11th-ranked Bowling Green, 4-2, snapping a four-game losing streak and earning a home-and-home split with the Falcons after BGSU won in Oxford in the season opener. The Bulldogs, meanwhile, went out east and completed a sweep of Merrimack with a 5-1 victory in Massachusetts behind a big second period. These were the final non-conference games this season for both teams.

MIAMI 4, No. 11/11 BOWLING GREEN 2
Returning from a 23-day layoff, Miami came out firing on all cylinders to snap a four-game losing streak by downing former CCHA rival No. 11/11 Bowling Green, 4-2, Monday night at Slater Family Ice Arena. With the win (5-10-3), the RedHawks earned a home-and-home series split with BGSU (12-7-1), after the Falcons won in Oxford to open the season. Miami scored twice on the power play in the win, while senior forwards Karch Bachman and Gordie Green tallied a goal and two assists each, with Green becoming the first active NCHC player with 100 career points. After a mostly scoreless first frame, Miami struck twice in a two-minute span late in the opening period, first on the power play off the stick of freshman forward Ryan Savage,  while redshirt junior forward Christian Mohs doubled the lead 1:49 later with his second goal of the year. A man-advantage marker from Green in front of net, his 100th career point, made it 3-0 RedHawks early in the second stanza, before BGSU broke through midway through the period. The Falcons closed within one in the third period, but an empty-netter from Bachman sealed the win. Senior goalie Ryan Larkin totaled 35 saves in net for MU as BGSU outshot Miami, 37-31.

No. 10/10 MINNESOTA DULUTH 5, MERRIMACK 1
Behind a three-goal second period, 10th-ranked Minnesota Duluth cruised to a 5-1 win at Merrimack Monday afternoon at Lawler Rink to complete a road sweep and extend the Bulldogs’ (11-6-1) win streak to four games. Sophomore forward Cole Koepke paced the UMD offense with three points, scoring the game’s opening goal with 1:59 left in the first frame. The Bulldogs then poured it on in the second period with junior defenseman Louie Roehl and junior forward Justin Richards scoring 37 seconds apart midway through the middle frame to make it 3-0. A power play goal from fellow junior forward Nick Swaney late in the second period put the game out of reach, before the Warriors (4-13-2) broke through with an unassisted goal in the third period to break up senior Hunter Shepard’s shutout. Sophomore forward Noah Cates notched UMD’s final tally of the night. The Bulldogs outshot Merrimack, 26-17, in the win.

UP NEXT
The RedHawks and Bulldogs are idle until resuming NCHC play on Jan. 10-11, while four other NCHC teams face non-conference foes next weekend, Jan. 3-5, to open the new year. No. 7/5 Denver hosts No. 9/9 UMass in a top-10 showdown on Jan. 3-4, while No. 19 Western Michigan faces No.15 Notre Dame in a home-and-home series, first in South Bend on Jan. 3 and then in Kalamazoo on Sunday, Jan. 5. Also at home is top-ranked North Dakota, which welcomes Alabama-Huntsville for a pair, looking to extend its 13-game unbeaten streak, while Omaha hits the road for two games at Maine, with both series on Jan. 3-4. The Denver and UND series can be seen on NCHC.tv, while Sunday’s WMU game is also available on NCHC.tv. 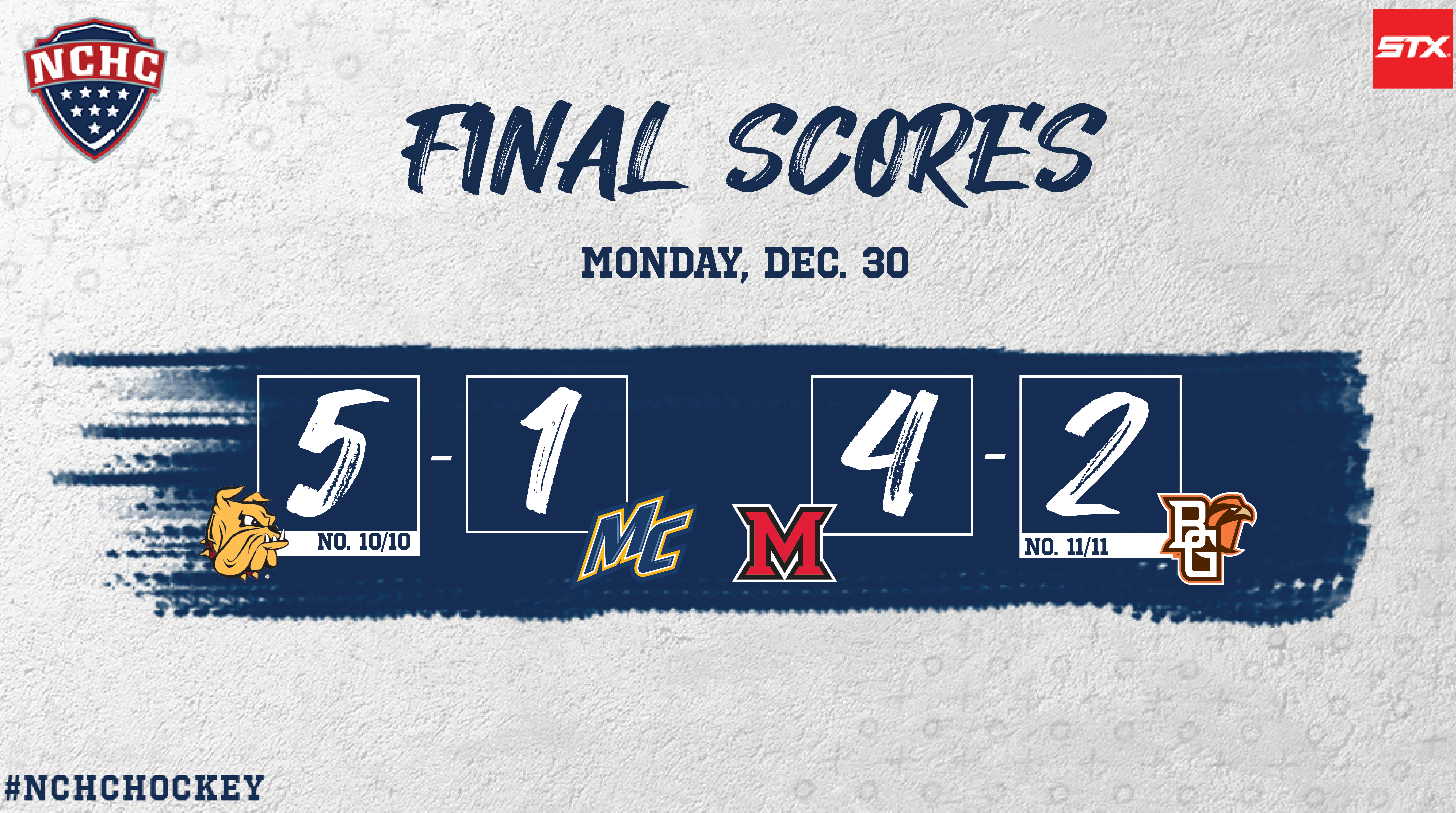