One day after Colorado College and St. Cloud State split a pair of games at holiday tournaments, the two teams finished their holiday tournaments on Sunday by doing the opposite of Saturday, while a third NCHC team returned from holiday break with success out east. The Tigers rolled past St. Lawrence, 7-3, in their finale at the Ledyard Classic, behind senior forward Chris Wilkie’s first career hat trick, to snap a three-game losing skid. No. 10/11 Minnesota Duluth ended a 22-day layoff with a 4-1 win at Merrimack, striking twice in each of the final two periods after shaking off the rust in the opener of a two-game set. After thumping second-ranked Minnesota State on Saturday, St. Cloud State couldn’t find a repeat performance on Sunday, falling to rival Minnesota, 4-1, in the championship game of the Mariucci Classic, as the Gophers won their own tournament.

COLORADO COLLEGE 7, ST. LAWRENCE 3
After dropping its first game in the Ledyard Classic, Colorado College snapped a three-game losing streak with a 7-3 win over St. Lawrence in its final game of the holiday tournament, hosted by Dartmouth at Thompson Arena in Hanover, N.H. The Tigers (7-8-1) used a strong power play and a big third period to top the Saints, as senior forward Chris Wilkie recorded his first career hat trick, all in the final 20 minutes, to lead the way. After allowing the game’s first goal in the closing minutes of the first frame on a SLU power play, CC responded with 24 ticks remaining in the opening period as senior forward Nick Halloran stole the puck behind the net and tallied short-handed to tie the game. The Tigers grabbed a 3-2 lead over the Saints (3-13-3) in the second period, while Wilkie took over the final frame. He scored his first goal only 42 ticks into the period off a feed from Halloran, while he tallied unassisted on the power play less than 90 seconds later. He then capped his first career hat trick with a second power play marker 7:11 into the third period, while CC’s final goal came only 10 seconds after that. The Tigers outshot SLU, 45-36, and went 2-for-4 on the power play.

No. 10/11 MINNESOTA DULUTH 4, MERRIMACK 1
Returning from a 22-day layoff, No. 10/11 Minnesota Duluth scored the game’s final four goals in downing Merrimack, 4-1, in North Andover, Mass. Sunday in the opener of a two-game series. The Bulldogs (10-6-1) dominated the opening period, outshooting Merrimack (4-12-2), 16-1, but the Warriors’ Troy Kobryn stopped them all to keep it scoreless after 20 minutes. Merrimack then took the lead on the power play early in the second stanza, but three minutes later sophomore forward Cole Koepke tied it for UMD with a short-handed tally. Junior forward Kobe Roth then gave the Bulldogs the lead for good in the closing minutes of the second period with the game-winning goal. Sophomore forward Jackson Cates made it 3-1 on the power play early in the final frame, finishing a feed from his brother, Noah, while a late goal from junior forward Justin Richards completed the scoring. UMD outshot Merrimack, 38-25, in the win.

MINNESOTA 4, ST. CLOUD STATE 1
Unable to find its offense from Saturday’s upset win over No. 2/2 Minnesota State, St. Cloud State fell to in-state rival Minnesota, 4-1, in the championship game of the Mariucci Classic on Sunday night at 3M Arena. After a scoreless first frame, the Gophers (7-9-4) broke through with a flurry of goals early in the second stanza, striking three times in a span of 1:40. Sammy Walker opened the scoring for Minnesota on the power play 3:46 into the period, while Tyler Nanne and Bryce Brodzinski tacked on goals over the next 100 seconds to break the game open. The Gophers added an empty-net goal in the final period to make it 4-0, before the Huskies (6-8-4) finally broke through with a late goal from sophomore forward Micah Miller. Minnesota, which won its own tournament, outshot SCSU, 33-25, and killed all four Huskies power plays.

UP NEXT
Two NCHC teams are in action on Monday for the final two games of 2019 involving an NCHC team. No. 10/11 Minnesota Duluth closes out its series with Merrimack at 4 p.m. ET, while Miami finishes off a home-and-home series at in-state rival No. 11/10 Bowling Green at 7:07 p.m. ET. 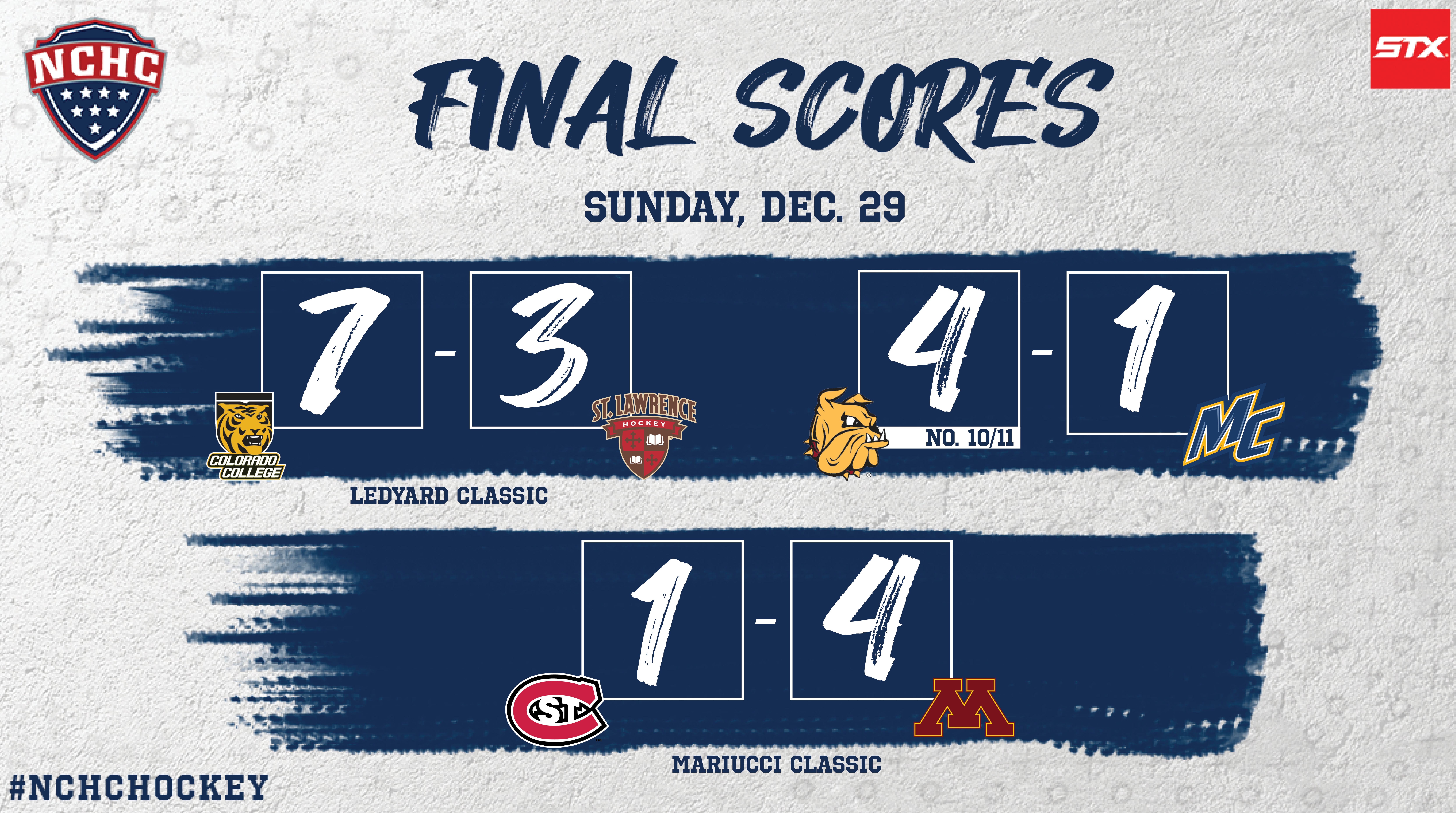