Three NCHC teams returned from holiday break on Saturday, with St. Cloud State winning in its holiday tournament opener and Colorado College falling in its tournament opener, while top-ranked North Dakota won its exhibition outing. The Huskies stunned No. 2/2 Minnesota State, 7-2, in the first game of the Mariucci Classic in Minneapolis to advance to Sunday’s final behind an NCHC-record-tying four goals from freshman forward Zach Okabe. In the night cap of the Ledyard Classic in Hanover, N.H., Colorado College dropped a 5-2 decision to tournament-host Dartmouth. In exhibition action, No. 1/1 North Dakota topped the U.S. Under-18 Team, 3-1, in Plymouth, Mich. as three Fighting Hawks found the back of the net.

ST. CLOUD STATE 7, No. 2/2 MINNESOTA STATE 2
Returning from a 14-day holiday break, St. Cloud State came out firing on all cylinders, thumping No. 2/2 Minnesota State, 7-2, in the first game of the Mariucci Classic Saturday afternoon at 3M Arena at Mariucci. With the win, SCSU (6-7-4) advances to Sunday night’s final against in-state rival and tournament-host Minnesota, who knocked off Bemidji State in Saturday’s nightcap. The Huskies struck twice in the first period and four times in the second period to take control, with freshman forward Zach Okabe scoring SCSU’s first three goals and four of their first five, tying an NCHC record for goals in a game. He opened the scoring at 5:22 of the game and made it 3-0 with a natural hat trick, the first hat trick of his career, early in the second stanza, adding his final goal six minutes later to make it 5-1, after the Mavericks (15-3-1) finally broke through. Fellow freshman Jami Krannila assisted on all four of Okabe’s markers for a career high. SCSU outshot Minnesota State, 25-18, in the win, including 12-5 in the middle period.

DARTMOUTH 5, COLORADO COLLEGE 2
Unlike St. Cloud State, Colorado College’s return from a 14-day layoff didn’t go as well, as the Tigers fell in the opening round of the Ledyard Classic to host Dartmouth, 5-2, Saturday night in Hanover, N.H. CC (6-8-1) is now sitting on a season-long three-game losing streak heading into Sunday’s tournament finale against St. Lawrence. The Big Green (5-4-2) jumped in front quickly, striking only 1:23 into the game, but sophomore captain and forward Grant Cruikshank tied it just 1:27 later, taking advantage of a Dartmouth turnover. The Big Green’s power play then took over, tacking on man-advantage goals late in both the first and second periods to go up 3-1. Senior forward Chris Wilkie answered for CC with his team-leading 10th goal soon after to make it a one-goal game, but Dartmouth had a response of their own with 1:26 left in the middle period to restore their two-goal lead and sealed the victory with a late empty-netter in the third period. Dartmouth outshot CC, 40-31, in the win, with CC freshman Matt Vernon stopping 35 shots. The Tigers went 0-for-4 on the power play while the Big Green were 2-for-4.

No. 1/1 NORTH DAKOTA 3, U.S. UNDER-18 TEAM 1 (Exhibition)
Although it doesn’t officially count as a win, top-ranked North Dakota showed little signs of rust in a 3-1 exhibition victory at the U.S. Under-18 Team in Plymouth, Mich. Saturday night, despite missing two players to the World Junior Championship and three others to illness. UND (14-1-2) is riding a 13-game unbeaten streak in NCAA play, last playing on Dec.7, 21 days ago. Sophomore defenseman Jonny Tychonick opened the scoring with 2:21 left in the opening period, finishing a centering pass from junior forward Collin Adams on the power play. After a scoreless second stanza, UND made it 2-0 midway through the final frame when Adams scored himself for his second point of the night. The U-18s broke up the shutout with 1:31 remaining in the game on the power play to make it 2-1, but sophomore forward Jasper Weatherby sealed the exhibition win with an empty-netter. UND outshot the U-18 squad, 25-19.

UP NEXT
Three NCHC teams are in action away from home on Sunday, including SCSU and CC wrapping up their tournaments. St. Cloud State faces in-state rival and tournament-host Minnesota in the Mariucci Classic final at 7 p.m. CT with the game on FOX Sports North, after the Gophers defeated Bemidji State in Saturday’s second semifinal. The Tigers close out play at the Ledyard Classic against St. Lawrence with puck drop at 4 p.m. ET. The third NCHC team in action Sunday is No. 10/11 Minnesota Duluth, which opens a two-game series at Merrimack with puck drop also at 4 p.m. ET. 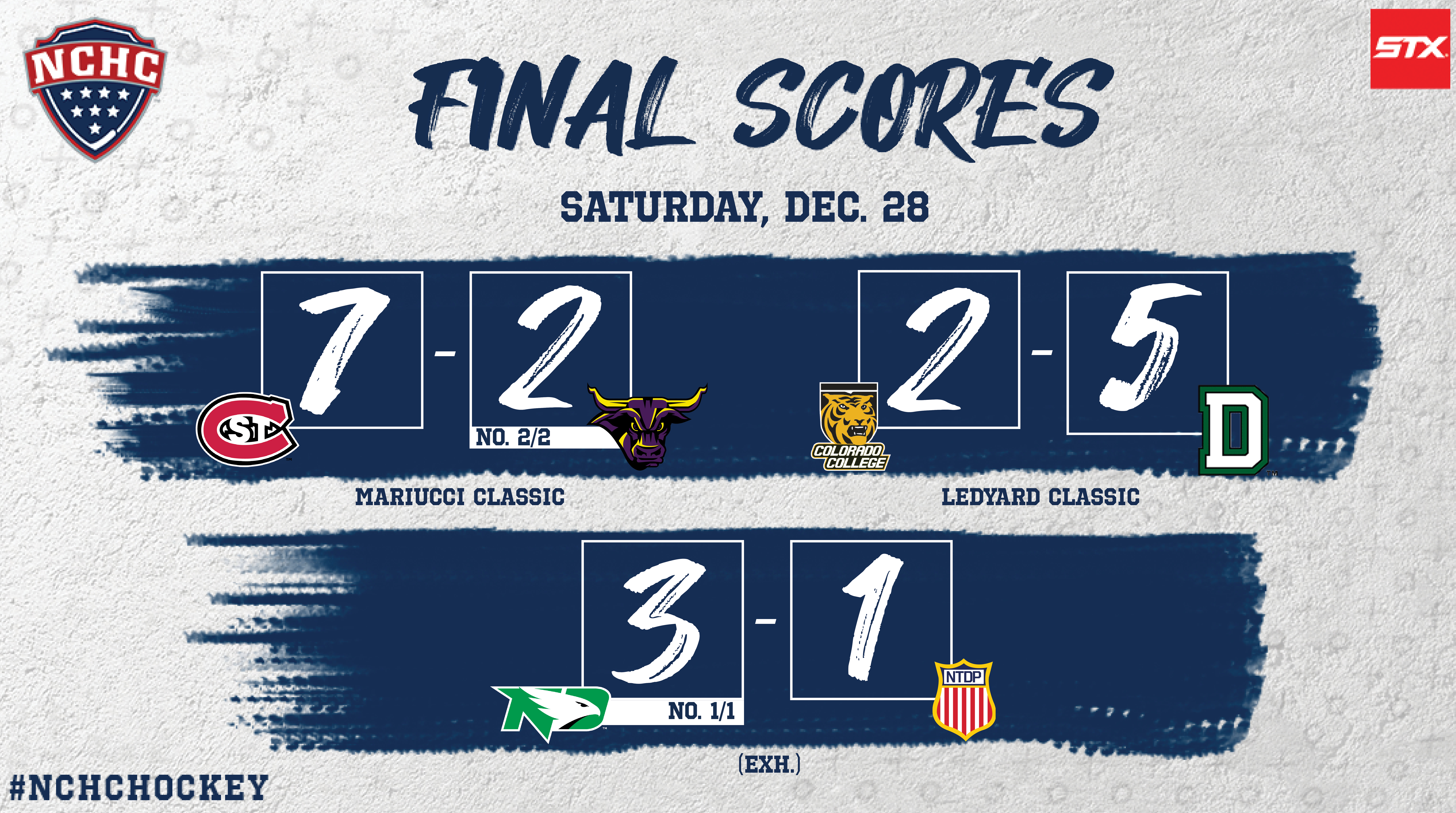 3⃣ #NCHCHockey teams in the top 9⃣ of today's @USCHO Poll, as DU & UMD continue to inch up the rankings UND remain… https://t.co/ju4EutjvG0