In the first of a unique series of stories showcasing NCHC coaches, players and alumni from a first-person perspective, Miami head coach Chris Bergeron writes about his journey from playing hockey at Miami to returning to Oxford for a third time to be the head coach at his alma mater.

OXFORD, Ohio - When you grow up in Canada, you’ll end up with a hockey stick in your hands at one point or another. For me, it wasn’t any different.

My dad taught me how to play hockey at a very young age. From the beginning, there was something really special about the sport.

Over the years, I had a chance to play in high school, college, and even professionally. And for the past two decades, I’ve taken on the coaching role in hopes of shaping young athletes into better players and men.

Today, I can proudly say that I’ve seen all sides of the sport and what it can do for people. Mostly, because I know what it has done for me.

Throughout my entire career, I’ve built relationships that continue to help me get to places I never could’ve dreamed of, including now being a head coach at my alma mater.

It’s been a unique journey with a lot of ups and downs.

And one thing that has always guided me through this journey was trusting the process.

From Youth Hockey to College

From the get-go, I’ve had a thing for hockey.

Once I started high school, I also began to take it more seriously. But even then, I had no idea where this sport would take me.

During my high school days, I began to work on my game year-round. At that time (the mid-80s), kids weren’t focused on just one sport like they are now.

I played as many sports as I could, but hockey was still my #1. It became the focal point of my life.

I soon had my eyes set on the next chapter of my life, college hockey. I had to trust that a team, any team, would take a look at me and give me a shot.

And the team that did give me a chance was the Miami RedHawks (Redskins at the time).

When I received their offer, it’s hard to describe what went through my head.

See, I wasn’t really on anyone else’s radar at that point. So, to get an opportunity like this felt like a lottery win. 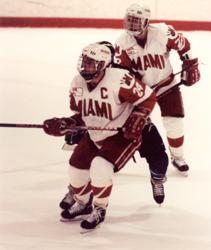 Chapter One With Miami

I vividly remember when we took down a powerhouse Lake Superior squad to win a regular-season conference title. I didn’t realize it at the time but being involved in that turnaround was an experience that I would need to draw upon in the future.

With time though, I came to realize that you often learn more during the more challenging phases. Yeah, it’s always fun to win, sure, but there’s a lot to be said about making mistakes and learning how to fix them. It definitely helps you grow as both a competitor and a person.

Those four years were a blast for me. I got to meet so many incredible people, and it really established Oxford as a second home for me.

After college, I decided to pursue playing professionally. Hockey was a passion that I just wasn’t ready to shelve. I ended up playing for seven years. The comradery with my teammates and just everything about that time in my hockey career was so special.

But, as all good things do, my playing days came to an end.

After hanging up my gear, I knew I still wanted to be close to the game, which is what brought me to coaching.

I remember getting a call back in 1999 from Miami’s then-head coach Rico Blasi, my former Miami teammate. He was looking for an assistant coach and wanted me to help him. Like I did with my playing days, I trusted the process and that moving back to Oxford was the right thing for me and my family.

Today, I can say with confidence, it was. 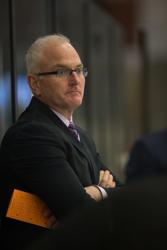 One of the most important things I’ve learned during my time as an assistant with Miami was that relationships and trust are an important part of building success.

Rico and I already knew each other quite well. However, we had to figure out how we’d connect professionally.

In our 10-year run, we were able to make two appearances in the Frozen Four, the only two in school history. Those teams were some of the best I’ve seen. The players worked so well together, knew how to cope with adversity, and especially had a great understanding of what it takes to win.

It was very humbling to be an assistant coach and come so close to a national title in ’09 and again in ’10. Those teams will always hold a special place in my heart.

But shortly after the ’10 season ended, an opportunity came knocking for a head coaching job at Bowling Green. It was a great honor to even be considered, but at the same time, it put me in front of a really difficult decision. After all, Oxford was my home.

A lot of careful consideration later, we, as a family, decided to take a leap of faith and I accepted the position with the Falcons.

As heart-wrenching as it was to leave Miami, I had to trust that this was the best move for us.

And once again, that trust paid off. 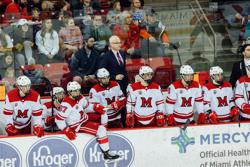 Coach Bergeron now behind the bench as head coach at his alma mater.

My time at Bowling Green was invaluable, yet very challenging. It was my first head coaching gig and I was taking over a team that had just finished last and won a mere five games.

It taught me the difficulties of learning on the job. And especially what it takes to be a head coach.

For starters, I brought along two guys I trusted to help build up the program. As mentioned earlier, it was all about forming relationships with those guys from a professional standpoint to set us up for success.

Being surrounded by good guys and good players made it an enjoyable experience for everyone. I still take great pride in all the hard work everyone was doing and the progress that was being made. We managed to turn the program around and built what we think is a great foundation for years to come.

That’s what made it hard to leave.

But when I found out that the Miami head coaching job opened up, it was impossible to not look at it. After all, there were so many things that tied me to Oxford.

Again, I was faced with a difficult choice though.

So, I did what I did last time. I had long conversations with my family to determine what to do.

Well, what can I say… I’m back in Oxford; leading the team I once played for.

Trust in the Future

Stepping back on campus felt surreal. I came in as a wide-eyed freshman back in 1989. Now, 30 years later, I was back as the head coach for the RedHawks.

As with any team I coached, I know I have to build up relationships first. With my coaching staff, the university, and most importantly, I have to earn my players’ trust. No matter who you are or what you’ve accomplished in the past, that is critical for success.

So, once again, it’s all about building, trusting the process, and coming together as one. We need to throw a little patience in there too.

I can’t express how excited I am to be back here with the Miami RedHawks.