COLORADO SPRINGS, Colo. – For the second consecutive season, Minnesota Duluth has been selected by the media as the favorite to hoist the Penrose Cup, awarded to the National Collegiate Hockey Conference (NCHC) regular-season champions, as the 2019-20 NCHC Preseason Poll was unveiled Wednesday on Twitter.

This marks the third time in the NCHC’s seven-year history that Minnesota Duluth has been tabbed the favorite to win the NCHC by the media, also occurring in 2015 and 2018, though the Bulldogs are still in search of their first Penrose Cup. UMD, which finished as runner-up in the NCHC last season, is coming off its second straight NCAA national championship and returns 20 letterwinners from last year’s squad that also captured the 2019 NCHC Frozen Faceoff. That includes four players (junior forwards Justin Richards and Nick Swaney, junior defenseman Scott Perunovich and senior goaltender Hunter Shepard) who were named to the NCHC Preseason All-Conference Team on Tuesday.

Denver enters the 2019-20 campaign coming off its third NCAA Frozen Four appearance in four seasons. The Pioneers bring back 19 letterwinners and lost only four from last year’s team that finished fourth in the NCHC regular season and took third place in the NCHC Frozen Faceoff. Western Michigan looks to build on last season’s third-place finish in the NCHC standings, after having its season end in disappointment in the NCHC Quarterfinals. The Broncos return 18 letterwinners from 2018-19, including Preseason All-NCHC senior forwards Hugh McGing and Wade Allison.

North Dakota, picked fourth in the poll, looks to return to the top half of the NCHC standings after finishing fifth last season, its lowest finish in six years of the NCHC. The Fighting Hawks have 20 letterwinners coming back after missing the Frozen Faceoff a season ago for the first time in NCHC history. St. Cloud State sits just behind UND in the poll, but has captured each of the last two Penrose Cups and is the lone NCHC team with three Penrose Cups in its history. The Huskies will have to replace a lot of firepower, having lost 10 letterwinners and bringing in 10 newcomers, but SCSU does return 17 letterwinners from last year’s championship squad, including Preseason All-NCHC pick senior defenseman Jack Ahcan.

The final three teams in the preseason poll were picked to finish in the same spot they did last season. Colorado College, which was sixth a season ago, did earn its first trip to the Frozen Faceoff last season with a quarterfinal series upset at Western Michigan, but lost 11 letterwinners from that squad. Omaha tied with Miami for seventh place last year, but won the head-to-head tiebreaker with the RedHawks for the No. 7 seed. The Mavericks lost 12 letterwinners from a season ago, returning only 15, the fewest in the NCHC this season. Miami looks to avoid finishing in last place again under new head coach Chris Bergeron, who returned to his alma mater after leading Bowling Green to the NCAA Tournament last season.

A total of 28 ballots were submitted by local media members from each school, as well as select national media. Points were awarded on a descending scale with a first-place vote worth eight points, a second-place vote worth seven points and so on.

While Media Day serves as the unofficial start of the 2019-20 season, the NCHC officially drops the puck on season seven on Saturday, Oct. 5 with one non-conference contest and a quartet of exhibition games. On Sunday, Oct. 6, three NCHC teams are in action, while opening weekend concludes with the final NCHC team hosting an exhibition game on Monday, Oct. 7. Fans can watch all the exciting NCHC action this season on NCHC.tv, where more than 145 NCHC games will be streamed live during the season. To subscribe to NCHC.tv, click here. 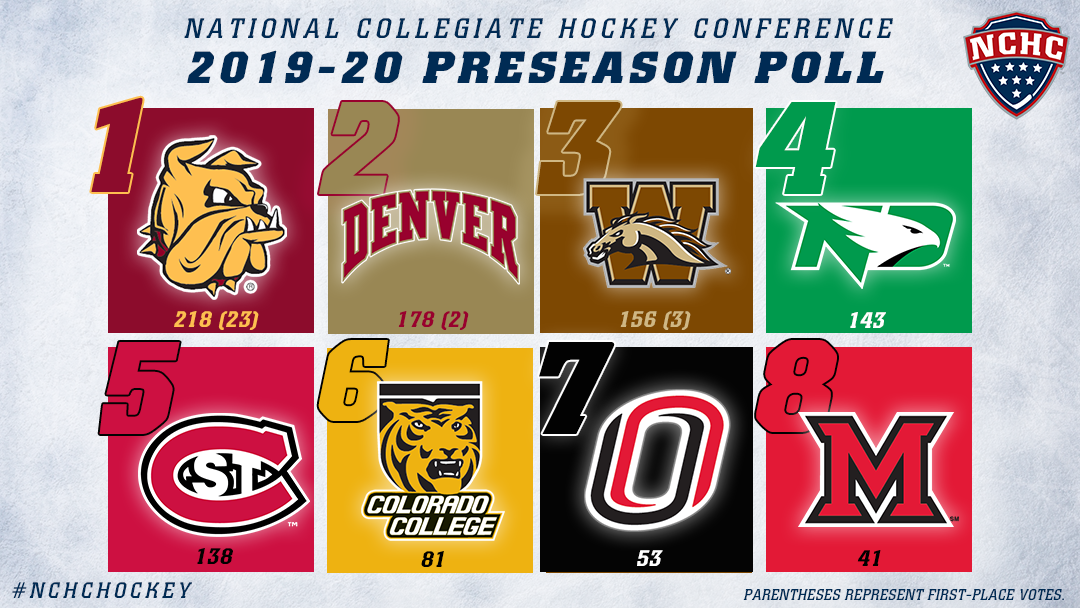