Pair of Bronco forwards, SCSU defenseman round out seven-man squad chosen by media

Four of the seven members of the Preseason All-NCHC Team are seniors, while the other three are juniors. The lone unanimous member of the squad is Minnesota Duluth senior goaltender Hunter Shepard, who was named on all 27 ballots submitted by local media members from each school, as well as select national media. His teammate, junior defenseman Scott Perunovich, collected 25 votes, while St. Cloud State senior defenseman Jack Ahcan earned 12 votes to round out the Preseason All-NCHC blue line. Western Michigan senior Hugh McGing was the top vote-getter at forward, picking up 22 votes, while UMD junior Justin Richards garnered 13 votes. Two players tied for the third forward spot, resulting in the seven-man team, as fellow WMU senior Wade Allison and fellow UMD junior Nick Swaney each were named on 10 ballots. Shepard, Perunovich and Allison were all named to the 2018-19 Preseason All-Conference Team, as well.

Shepard (Cohasset, Minn.) was a First-Team All-NCHC selection last season after earning Second-Team honors in 2017-18. The 2019 Mike Richter Award finalist was also named NCHC Goaltender of the Year and First-Team All-America in 2018-19, while backstopping UMD to the 2019 Frozen Faceoff title as the Most Outstanding Player. Shepard started all 42 games in goal for the Bulldogs last season, leading them to a second straight NCAA championship. He led the country with 29 wins, going 29-11-2, while his seven shutouts tied for second nationally a season ago, posting a 1.76 goals-against average (fourth nationally) and a .923 save percentage. In conference play, Shepard led the NCHC with a 1.92 GAA and five shutouts, while going 14-9-1 with a .914 save percentage.

Perunovich (Hibbing, Minn.) is a two-time First-Team All-NCHC honoree, two-time All-American and the two-time NCHC Offensive Defenseman of the Year. In 23 conference games last season, the St. Louis Blues draft pick tallied two goals and added 14 assists for 16 points and had a +2 plus/minus. Overall, Perunovich finished 2018-19 with 29 points on three goals and 26 helpers. Ahcan (Savage, Minn.) earned Second-Team All-NCHC and Second-Team All-America honors a season ago, finishing second in conference scoring among blue liners with 17 points, including 14 assists, in 24 games. His +18 plus/minus in NCHC play was tops in the conference, helping lead SCSU to a second straight Penrose Cup. Overall, Ahcan finished with 34 points (6g, 28a) in 39 games.

McGing (Chicago, Ill.) and Richards (Columbus, Ohio) were both Second-Team All-NCHC selections with Ahcan last season. McGing is the top returning scorer and goal-scorer in conference play this season after totaling 20 points in 24 games on 11 goals and nine assists in 2018-19. Overall, the Blues prospect totaled 30 points (16g, 14a) in 37 games a year ago. Richards compiled 18 points (8g, 10a) in 24 conference games last season and totaled 32 points (12g, 20a) overall, while playing in all 42 games for the national champions.

The fourth Bulldog on the Preseason All-Conference Team, Swaney (Lakeville, Minn.) garnered Honorable Mention All-NCHC last season. The Minnesota Wild draft pick ties with McGing among returning players after notching 11 goals in 22 conference games last season, while totaling 15 points and a +14 plus/minus. Swaney scored the game-winning goal in double overtime in the 2019 Frozen Faceoff championship game and had 25 points (15g, 10a) in 40 games a season ago. Allison (Myrtle, Manitoba) racked up 13 points (8g, 5a) in 16 NCHC games during an injury-riddled season, while the Philadelphia Flyers draft pick totaled 15 points in 22 games overall.

The 2019-20 NCHC Preseason Media Poll will be released on Wednesday, and will first be counted down on the NCHC’s Twitter account, @TheNCHC, beginning at 3 p.m. ET.

NCHC Media Day then takes place the following day on Thursday, Sept. 19 at Xcel Energy Center in Saint Paul, Minn., the home of the NCHC Frozen Faceoff. Fans can take part in 2019 NCHC Media Day by asking questions during the Twitter Takeovers, watching Facebook LIVE interviews, and following along on NCHC.tv and the NCHC’s Media Day Blog.

While Media Day serves as the unofficial start of the 2019-20 season, the NCHC officially drops the puck on season seven on Saturday, Oct. 5 with one non-conference contest and a quartet of exhibition games. On Sunday, Oct. 6, three NCHC teams are in action, while opening weekend concludes with the final NCHC team hosting an exhibition game on Monday, Oct. 7. Fans can watch all the exciting NCHC action this season on NCHC.tv, where more than 145 NCHC games will be streamed live during the season. To subscribe to NCHC.tv, click here. 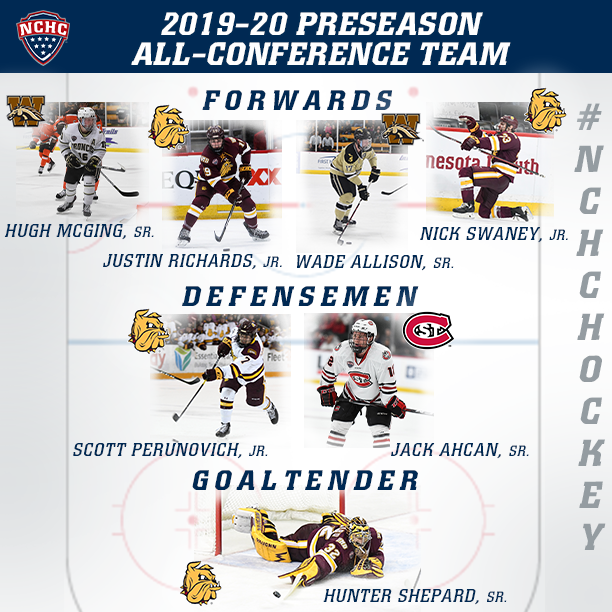