COLORADO SPRINGS, Colo. – Entering the 2019-20 season, the National Collegiate Hockey Conference (NCHC) has established a new three-year partnership with Krampade to become the official sports drink of the NCHC, the conference announced Monday.

As part of the partnership, NCHC institutions competing at the Frozen Faceoff will have the ability to use Krampade’s anti-cramping sports drink. In addition, Krampade will serve as the presenting sponsor of the NCHC’s “Stump the Coach” game show series and school feature series, which air on NCHC.tv and the NCHC’s social media channels each Wednesday throughout the season. Krampade will also have a branding presence on the NCHC’s websites, NCHCHockey.com and NCHC.tv.

“As a new and innovative company, the NCHC is excited to enter into this partnership with Krampade,” NCHC Commissioner Josh Fenton said. “This relationship is a great fit, as some of our member institutions are already partners with Krampade.”

Krampade, which first began experimenting with its formula in 2012, was officially established in 2015 to help people such as athletes and chronic crampers find quick relief and achieve what was previously not possible. Krampade uses a science-based formula high in potassium and sodium to help replace electrolytes, especially potassium, to aid in muscle recovery, hydration, and cramp prevention.

“At Krampade, we have been patiently waiting for an opportunity to build on our established relationships in the hockey space by becoming the official sports drink of NCHC, which we view as the leading conference in NCAA Division I hockey,” said Eric J. Murphy, CEO of Krampade. “Our products have been used by teams in the NCHC for a number of years, making this new partnership an excellent fit and we look forward to continued growth with the NCHC.”

ABOUT KRAMPADE
Krampade, LLC, is a Nebraska-registered company with manufacturing and logistics operations in Grand Forks, North Dakota. Our manufacturing facility is FDA-registered and each product has a complete nutrition label compliant with all FDA regulations for food products. Krampade focuses on manufacturing products based upon potassium repletion to prevent and mitigate cramp formation, while enhancing performance and recovery using our patent-pending formulations. Our website is at www.krampade.com. 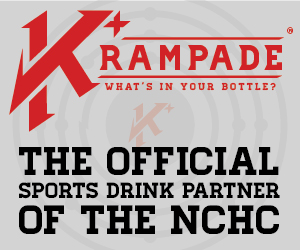