Bulldogs blank UMass, 3-0, to win 2019 NCAA Championship and a fourth straight title for the NCHC

BUFFALO, N.Y. – For the second straight season, the Minnesota Duluth Bulldogs are the NCAA National Champions. Top-seeded and top-ranked UMD dominated from start to finish, scoring once each period, to blank fellow No. 1 seed and second-ranked Massachusetts, 3-0, Saturday night at KeyBank Center in the NCAA Men’s Ice Hockey National Championship game. With the win, the Bulldogs (29-11-2) end the season on an eight-game winning streak, while capturing the third National Championship in program history.

UMD’s national title also gives the National Collegiate Hockey Conference (NCHC) four straight National Championships, with North Dakota winning in 2016 and Denver winning in 2017 prior to the Bulldogs’ back-to-back titles. The NCHC becomes the first conference to win four straight National Championships since the WCHA won five in a row from 2002-06. Minnesota Duluth becomes the first team to repeat as champions since Denver won the 2004 and 2005 titles as part of the WCHA’s run.

Junior goaltender Hunter Shepard recorded his seventh shutout of the season to backstop UMD to its second straight national title. Yale was the last team to record a shutout in the championship game, doing so in 2013, while the Bulldogs become the sixth team to whitewash its opponent in NCAA championship game history. Shepard stopped all 18 shots he faced for the clean sheet, while the 18 shots on goal allowed by UMD were the second-fewest ever in an NCAA title game.

The Bulldogs wasted little time jumping in front, striking only 3:51 into the game on the power play. Junior forward Riley Tufte had the puck in the slot and fed it up top to sophomore blue liner Mikey Anderson. He quickly dished it down low to senior captain Parker Mackay, who was all alone in front of the net and flipped the puck in the goal with his back-hand for a 1-0 lead.

Later in the period, UMass (31-10-0) earned its first power play of the night, but the Bulldogs penalty kill was stellar, not allowing a single shot by the Minutemen. UMD took its 1-0 lead into the first intermission, while outshooting UMass, 14-5, in the opening 20 minutes.

The second stanza saw lots of back-and-forth action with few whistles, until the Bulldogs doubled their lead with 4:12 to play in the middle period. Mackay cycled in the zone ending with the puck in the right circle, before dishing to Anderson, who was cutting hard down the slot. Anderson continued to charge toward the net before firing a sharp wrister top-shelf to make it 2-0 with his sixth tally of the season.

Minnesota Duluth then sealed the championship with 2:42 remaining in the game when freshmen Tanner Laderoute and Jackson Cates combined for UMD’s third goal. Laderoute gathered the puck down low and dragged a UMass defender with him, before leaving the puck for Cates all alone in front for a quick, low wrister that beat goalie Filip Lindberg on his stick side.

Minnesota Duluth finished with a 31-18 advantage in shots on goal, while killing all four UMass power plays. The Minutemen entered with the top power play unit in the country. The Bulldogs, meanwhile, were 1-for-4 a man up in the victory.

Minnesota Duluth, which lost the 2017 NCAA title game to Denver, was playing in its third straight National Championship game, the first team to do so since Boston College from 2006-08. No team has ever appeared in four straight championship games, something the Bulldogs will have a chance to achieve next season. 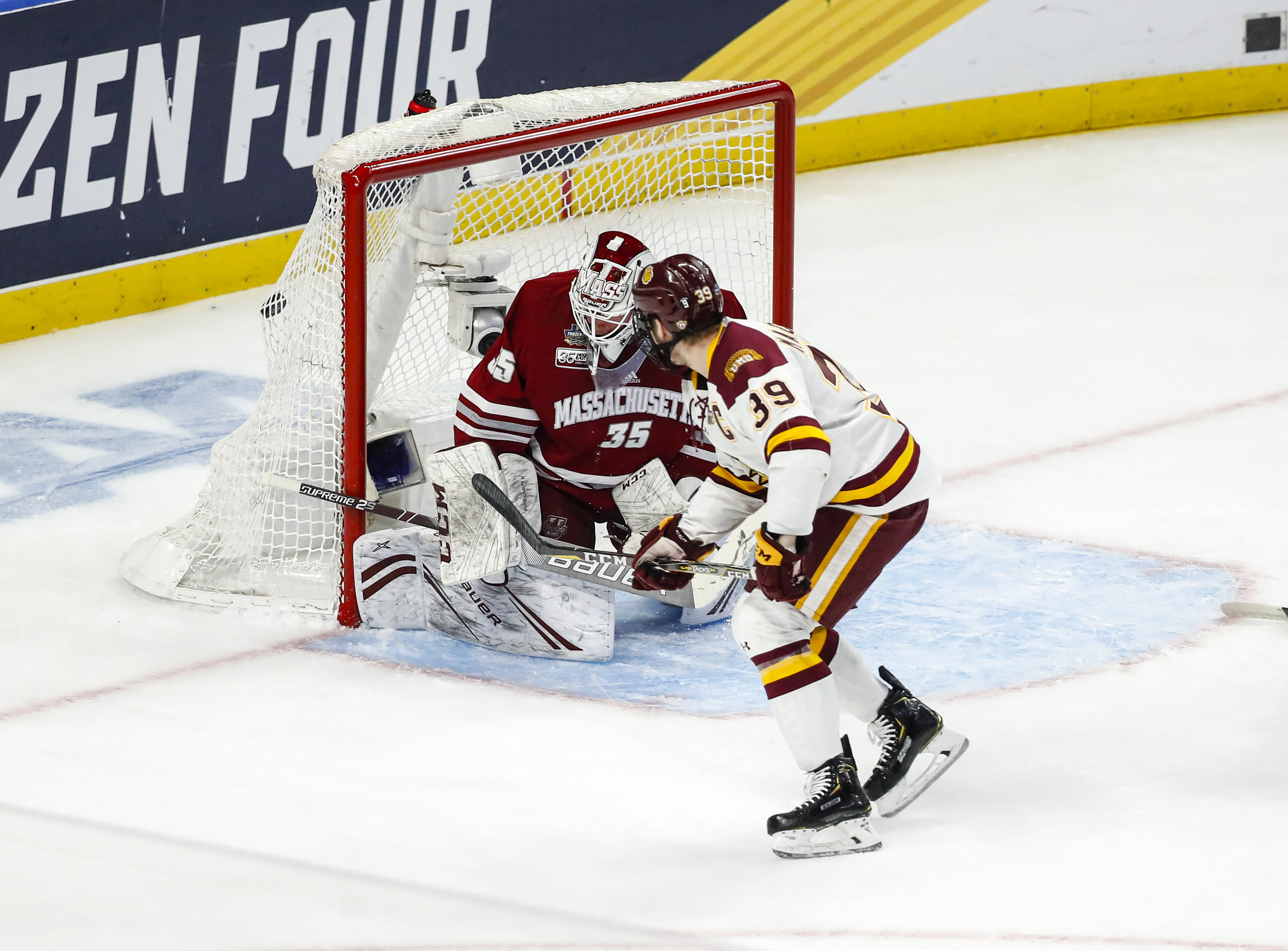 Parker Mackay scores the first goal of the game for UMD. Photo by Matt Dewkett 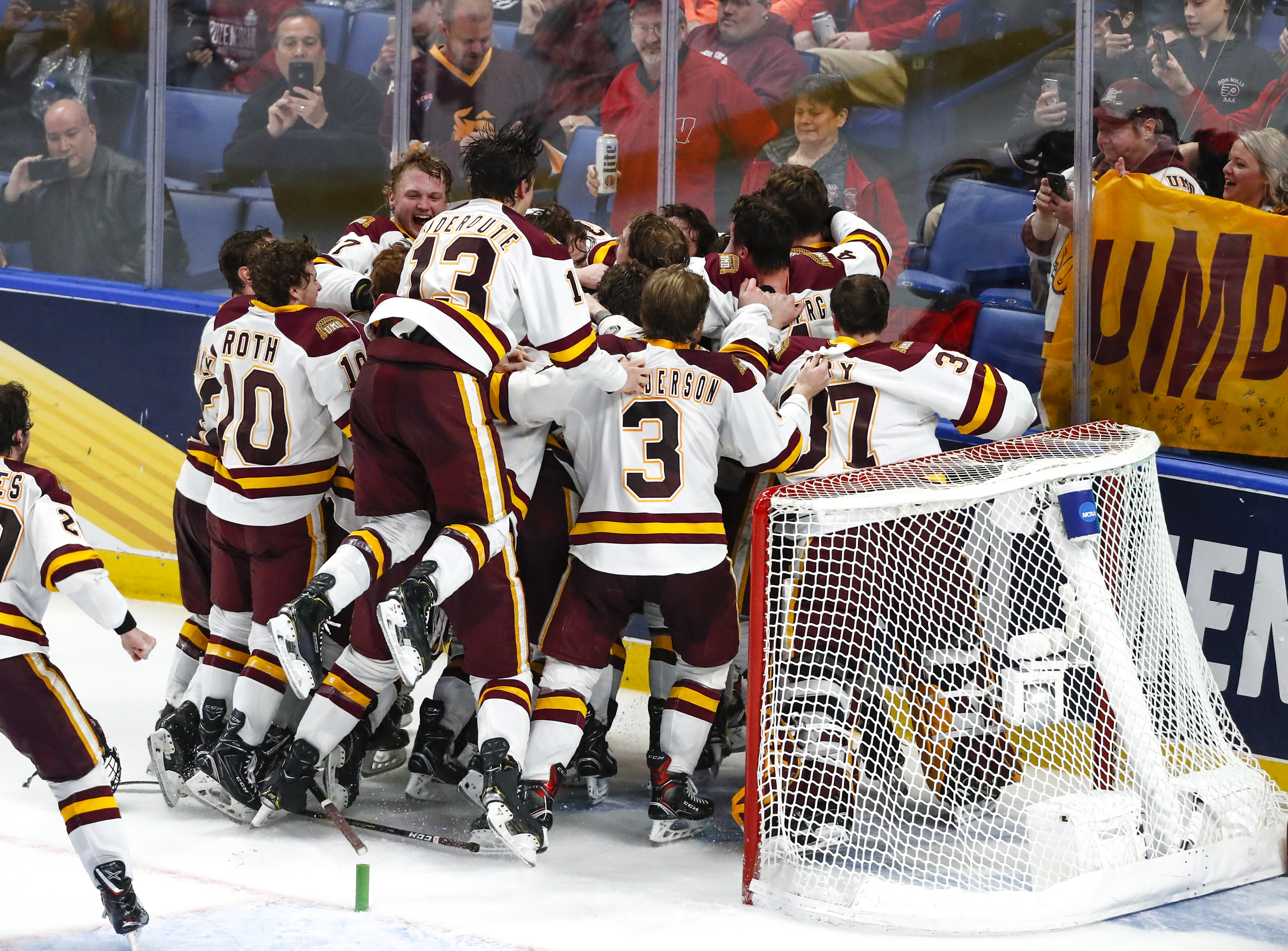 UMD celebrates its national title after the buzzer sounds. Photo by Matt Dewkett 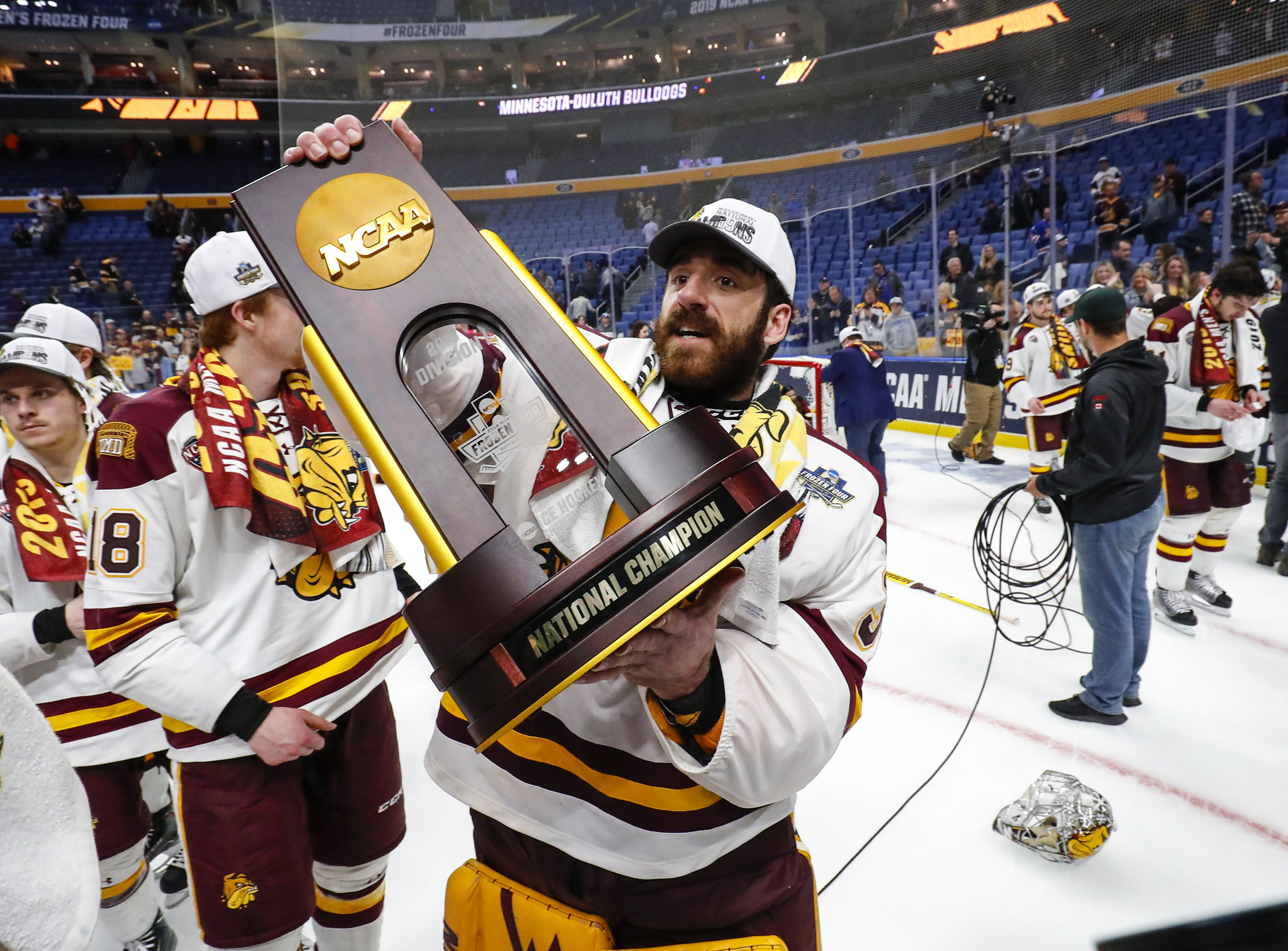