SAINT PAUL, Minn. – St. Cloud State senior defenseman Jimmy Schuldt has earned a spot among the 2019 Hobey Hat Trick, as the Hobey Baker Memorial Award Committee revealed the three finalists up for the top player in NCAA Division I men’s ice hockey on Thursday. This marks the third straight season and five times in six years of competition that the National Collegiate Hockey Conference (NCHC) has been home to a Hobey Hat Trick finalist.

Schuldt (Minnetonka, Minn.) was named the 2018-19 NCHC Player of the Year and Defensive Defenseman of the Year, while also earning All-CHN First Team honors for the second straight season from College Hockey News. A two-time First-Team All-NCHC selection, including unanimously this season, Schuldt is also a top-10 finalist for the Senior CLASS Award, was voted to the NCHC Frozen Faceoff All-Tournament Team two weekends ago and is a three-time NCHC Defenseman of the Week.

Schuldt led all NCHC blue liners with 35 points this season, which tie for seventh nationally, while scoring 10 goals, tying for eighth among NCAA defensemen, and chipping in 25 assists. The three-time team captain played in all 39 games this season, never missing a single game in his career (156 straight games), while posting a +24 plus/minus, which ties for seventh nationally among blue liners. Schuldt blocked 77 shots on the season, while firing 79 shots on goal and tallying 17 points on the power play.

The newest member of the Vegas Golden Knights, after Schuldt signed an NHL contract on Wednesday, led the Huskies to their second straight Penrose Cup as NCHC regular-season champions this season with a conference-record 62 points. He guided SCSU to an undefeated home campaign, a 30-win season and a No. 1 national ranking much of the year, as well.

Schuldt was also a finalist for NCHC Offensive Defenseman of the Year and NCHC Senior Scholar-Athlete. The finance major is a four-time member of the NCHC Academic All-Conference Team, as well as a four-time NCHC Distinguished Scholar-Athlete with at least a 3.5 cumulative grade-point average all four years, including a 3.66 GPA currently as he heads toward graduation in May. Schuldt, who was a Hobey Baker Award top-10 finalist last season as well, is also active in the community by helping with Special Olympics and coaching DinoMights, an inner-city hockey organization based in Minneapolis.

The 2019 Hobey Baker Award winner will be announced on Friday, April 12 in Buffalo, N.Y. during the NCAA Men’s Frozen Four. The award announcement will take place at HarborCenter at 6 p.m. ET. The 39th annual announcement will be televised live on the NHL Network and streamed on HobeyBaker.com.

The three finalists were selected from the initial list of Top Ten candidates by the 29-member Selection Committee and an additional round of online fan balloting to determine this year’s Hobey Baker winner. Criteria for the award includes: displaying outstanding skills in all phases of the game, strength of character on and off the ice, sportsmanship and scholastic achievements.

The Hobey Baker Award announcement at HarborCenter is a free event and open to the public. Friday at the Frozen Four festivities will begin at 3:30 p.m. ET with an autograph signing featuring the two teams in the national championship game and the Hobey Hat Trick finalists. 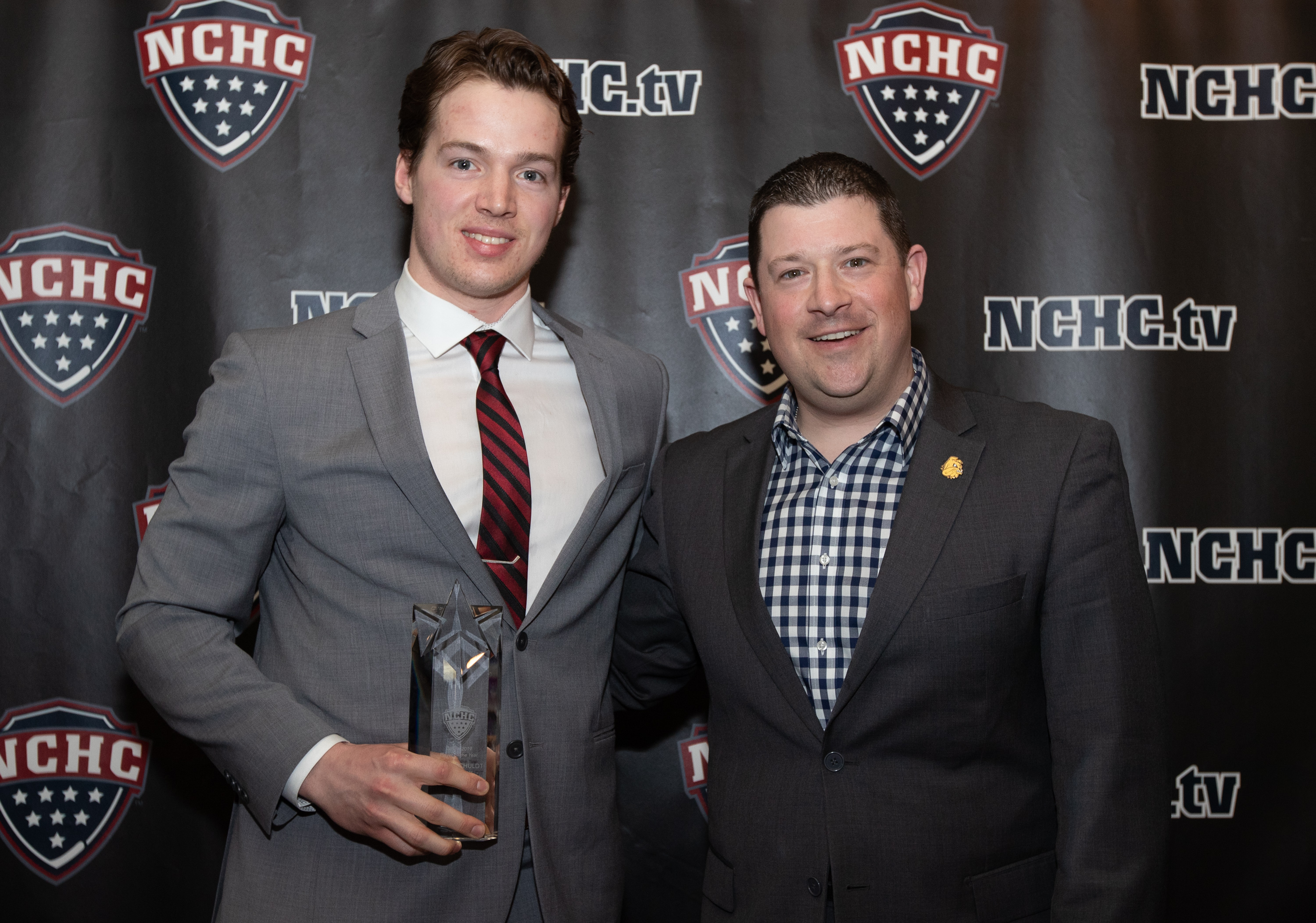 Jimmy Schuldt receives his NCHC Player of the Year Award on the eve of the Frozen Faceoff.