CHANHASSEN, Minn. – After being named a semifinalist last season, Minnesota Duluth junior goaltender Hunter Shepard has been selected one of only five finalists for the 2019 Mike Richter Award, presented annually to the most outstanding goaltender in NCAA men’s hockey, as Let’s Play Hockey announced the finalists on Thursday. Shepard is the lone National Collegiate Hockey Conference (NCHC) netminder among the finalists and one of four juniors up for the award. He looks to become the third NCHC goaltender to win the Mike Richter Award in the conference’s six-year history.

Shepard (Cohasset, Minn.) was voted the NCHC Goaltender of the Year and First-Team All-NCHC this season, as well as earning Most Outstanding Player at the 2019 NCHC Frozen Faceoff after backstopping UMD to the NCHC Tournament title in double overtime last weekend. In addition, he won the conference’s Three Stars Award after earning First Star of the Game five times in conference play.

Shepard started all 38 games in net for the Bulldogs so far this season, tying for the fourth-most starts in the country, while posting a 25-11-2 record for a .684 win percentage. His 25 wins on the season tie for second-most in the NCAA, while his win percentage ranks 10th nationally. Shepard’s six shutouts on the season, including in the Frozen Faceoff semifinals last Friday, tie for third in the NCAA, while he set the UMD school record for career shutouts during the season and now has 14 for his career. The undrafted free agent has compiled a .918 save percentage on the season, while his 1.87 goals-against average ranks sixth in the NCAA.

Shepard was also one of only three NCHC netminders to start all 24 conference games this year, going 14-9-1 in NCHC action with a conference-best 1.92 goals-against average. Shepard was a three-time NCHC Goaltender of the Week and two-time NCHC Goaltender of the Month. He also garnered Hockey Commissioners’ Association (HCA) National Goaltender of the Month honors for January and was the NCAA Third Star of the Week for the weekend of Jan. 18-19. The NCHC Player of the Year finalist allowed two goals or less 28 times and has posted a .930 or better save percentage in 19 games this season.

The 2019 Mike Richter Award will be announced at 5 p.m. ET on Friday, April 12 from the KeyBank Rink at The Rinks at HarborCenter in Buffalo, N.Y. during the 2019 NCAA Men’s Frozen Four. The announcement, held prior to the Hobey Baker Award presentation, will be streamed live at www.hobeybaker.com.

Criteria for the Mike Richter Award include outstanding skills on the ice, academic achievement and sportsmanship, playing in 50 percent or more of the season, and consideration should be given to the candidate’s activities in the community. The candidate must also comply with all NCAA rules and be in good academic standing at his college or university.

Candidates for the Mike Richter Award were determined by nominations from all 60 NCAA Division I men’s hockey head coaches. The finalists and winner are selected by a committee of coaches, scouts and members of the media.

The five finalists combine for a 1.93 goals-against average, a .930 save percentage and a grade-point average of 3.32. Two of the finalists are from ECAC Hockey, while one each comes from the NCHC, Hockey East and independent Arizona State. Shepard is one of two Minnesota natives up for the honor, along with Clarkson junior Jake Kielly. The other finalists are ASU junior Joey Daccord, Northeastern sophomore Cayden Primeau and Quinnipiac junior Andrew Shortridge.

Shepard and the top-seeded No. 2/2 Bulldogs open NCAA Tournament play on Saturday against No. 15/15 Bowling Green in the Midwest Regional in Allentown, Pa. UMD will see two other Richter Award finalists in Allentown as Arizona State (Daccord) and Quinnipiac (Shortridge) meet in the other Midwest Region semifinal on Saturday.

For more information on each of the five finalists, click here. 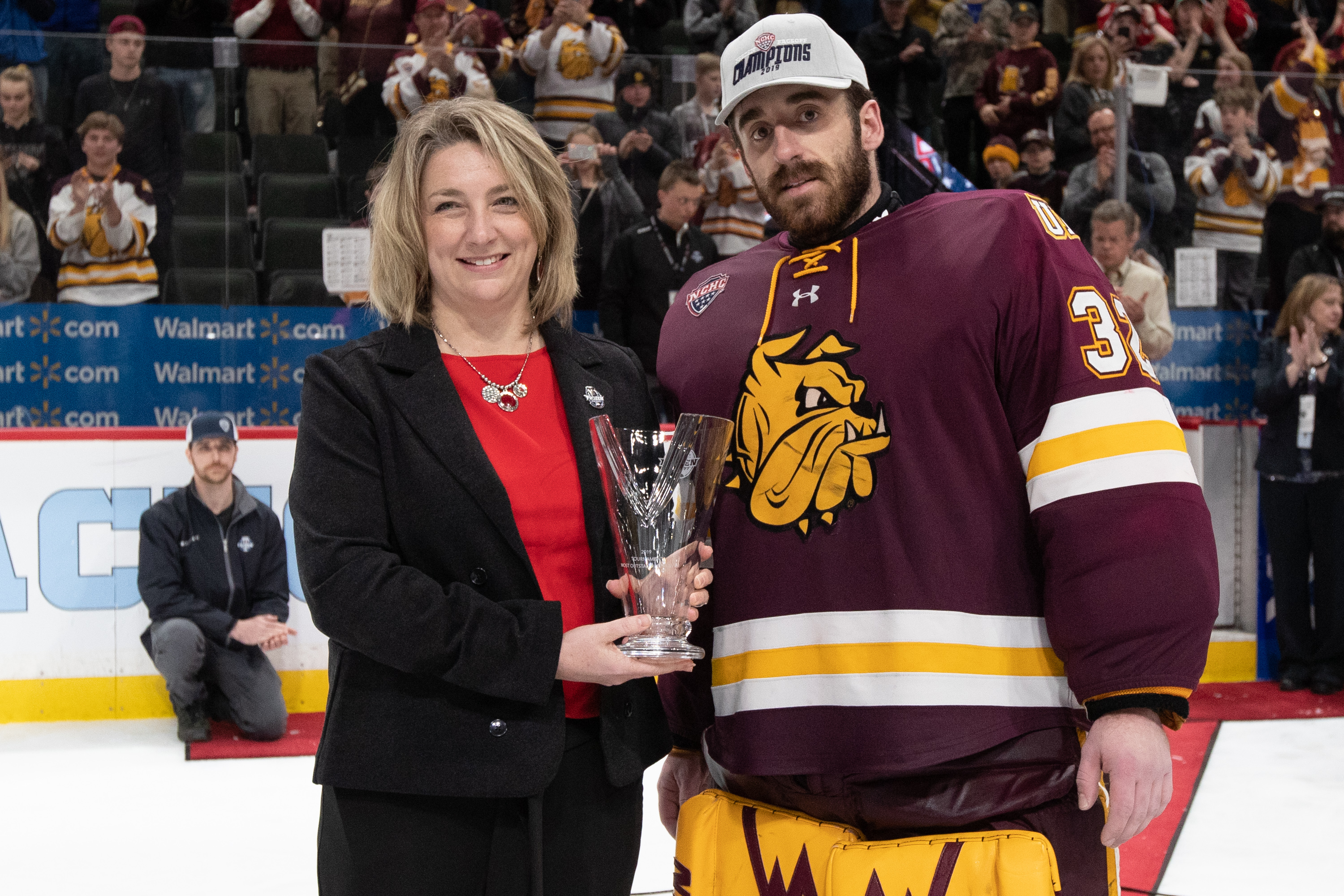