Poolman, Schuldt, Shepard up for NCHC Player of the Year; winners announced March 21

COLORADO SPRINGS, Colo. – While the winners won’t be known for another week, the National Collegiate Hockey Conference (NCHC) announced the finalists for 10 of its individual awards for the 2018-19 season on Thursday. The winners will be revealed and presented their awards next Thursday, March 21 at the annual NCHC Awards Celebration at the Science Museum of Minnesota in Saint Paul on the eve of the sixth annual NCHC Frozen Faceoff at Xcel Energy Center.

Up for the NCHC’s top honor are a pair of defensemen and a goaltender as North Dakota junior Colton Poolman and St. Cloud State senior Jimmy Schuldt, along with Minnesota Duluth junior netminder Hunter Shepard are up for NCHC Player of the Year. Schuldt and Shepard both earned First-Team All-NCHC on Wednesday, while Poolman was named Honorable Mention. Schuldt was the top-scoring blue liner in NCHC play with 23 points in 24 games, while his 17 assists and six goals also led defensemen. The three-time NCHC Defenseman of the Week was second among NCHC blue liners with his +16 plus/minus. Shepard, who was named a Mike Richter Award semifinalist, led the NCHC with both a 1.92 goals-against average and five shutouts, while posting a 14-9-1 record with a .914 save percentage. Poolman played in 22 NCHC games, racking up 12 points on two goals and 10 assists, while posting a +6 plus/minus and blocking 22 shots.

The bench bosses up for NCHC Herb Brooks Coach of the Year all led their teams to a top-3 finish in the NCHC and a top-10 national ranking for much of the season. St. Cloud State first-year head coach Brett Larson led the Huskies to their second straight Penrose Cup as regular-season champions, setting NCHC records for points (62), win percentage (.854) and fewest conference losses (2), while tying for the most wins all-time (19). Western Michigan head coach Andy Murray, the 2017 Herb Brooks Coach of the Year, guided the Broncos to a third-place finish, tying their best-ever finish in the NCHC, as WMU went 13-10-1-1 in conference play after being picked to finish fourth in the NCHC Preseason Poll. The third finalist is Minnesota Duluth head coach Scott Sandelin, who led the Bulldogs to a runner-up finish in the NCHC with a 14-9-1-0 conference mark, tying UMD’s best-ever finish in NCHC play (2016-17). The Bulldogs have also ranked in the top 5 nationally the entire season. Larson and Sandelin are looking for their first NCHC Coach of the Year honors.

While the NCHC has plenty of skilled players on the ice, the conference also has student-athletes working hard in the classroom. The Senior Scholar-Athlete Award goes to the fourth-year player who best combines their work on the ice and in the classroom. The finalists are Colorado College forward Mason Bergh, Omaha forward Fredrik Olofsson and SCSU’s Schuldt. Bergh is an economics major with a 3.83 grade-point average, while Olofsson is a business administration major with a 3.74 GPA and Schuldt is a finance major, who carries a 3.66 GPA.

A quartet of netminders are up for NCHC Goaltender of the Year, including Player of the Year finalist Shepard, along with St. Cloud State sophomore Dávid Hrenák, Denver freshman Filip Larsson and Colorado College junior Alex Leclerc. Shepard was a two-time NCHC Goaltender of the Month, three-time Goalie of the Week and was one of only three NCHC goalies to start all 24 conference games this season. Hrenák earned Second-Team All-NCHC honors, while the L.A. Kings draft pick logged three shutouts, which was second behind Shepard. He posted a .913 save percentage and a 2.04 GAA, which also trailed only Shepard among NCHC netminders. Larsson was a member of the NCHC All-Rookie Team with an NCHC-best .925 save percentage and a 2.14 GAA, while posting a 6-4-2 record in conference play (.583 win percentage). The Detroit Red Wings draft pick started half of the conference slate (12 games), recording one shutout. Leclerc was a three-time NCHC Goaltender of the Week and earned Honorable Mention All-NCHC along with Larsson. His .919 save percentage was third in the NCHC, while he sported a 2.67 GAA to go with a 9-12-3 record and one shutout.

A trio of seniors are the finalists for NCHC Forward of the Year in Denver’s Jarid Lukosevicius, Omaha’s Mason Morelli and SCSU’s Patrick Newell. Lukosevicius finished second in the NCHC with 12 goals in 23 games, behind only Newell, while adding five assists for 17 points. His five game-winning goals and 83 shots on goal in conference play both led the NCHC, while he finished with a +8 plus/minus. Morelli, the November Player of the Month in the NCHC, was a Second-Team All-NCHC selection, who posted 18 points in 24 NCHC games on 10 goals and eight assists, firing 65 shots on goal. Newell captured the NCHC scoring title, leading the conference with both 13 goals and 28 points in 24 games, while his 15 assists tied for fourth in the conference. A First-Team All-NCHC recipient, Newell posted an NCHC-best +18 plus/minus in conference play and fired 75 shots on goal, third in the NCHC.

Up for Defensive Defenseman of the Year are two Player of the Year finalists in UND’s Poolman and SCSU’s Schuldt, along with Minnesota Duluth sophomore Mikey Anderson. Anderson, a L.A. Kings draft pick, earned All-NCHC Honorable Mention, while finishing sixth in the NCHC with 42 blocked shots and recording a +10 plus/minus. Schuldt tied for third in the NCHC with 53 blocked shots, while his +16 was fifth in the NCHC. Poolman blocked 22 shots, while committing only two penalties in 22 games, with his +6 plus/minus tops among blue liners on North Dakota.

Providing offense from the blue line, the three finalists for Offensive Defenseman of the Year are two of the same three finalists as a season ago in Schuldt, who is up for both defenseman honors, and Minnesota Duluth sophomore Scott Perunovich, who won the award as a freshman last season. The third finalist is SCSU junior Jack Ahcan, who earned Second-Team All-NCHC this season, while Schuldt and Perunovich made up the First-Team blue line for a second straight season. Schuldt was the top-scoring blue liner in NCHC play with 23 points and a three-time NCHC Defenseman of the Week. Perunovich was third in NCHC defenseman scoring with 16 points on two goals and 14 assists. The St. Louis Blues prospect posted a +2 plus/minus to go with 39 shots on goal. Ahcan was behind only Schuldt in defenseman scoring with his 17 points in 24 games, tallying three goals and chipping in 14 assists. He also led all NCHC skaters with a +18 plus/minus.

Four players are up for Defensive Forward of the Year in North Dakota senior Rhett Gardner, who won the award last season, SCSU sophomore Blake Lizotte, Miami senior Josh Melnick and UMD sophomore Justin Richards. Gardner led the NCHC with 345 faceoff wins, while his .603 faceoff win percentage was third in the NCHC. He also blocked 13 shots and committed a conference-high 22 penalties. Lizotte, a First-Team All-NCHC selection, led the NCHC in faceoff win percentage at .637 with his 318 wins second behind Gardner, while he blocked 11 shots and committed 11 penalties. Melnick went 208-180 in the faceoff circle (.536) and blocked 15 shots, committing only nine penalties, while Richards was 221-215 (.507) in the center circle, blocking 11 shots with only five penalties and earned Second-Team All-NCHC.

The finalists for the NCHC’s Three Stars Award, given to the player with the highest Three Stars of the Game point totals from the season, are all goaltenders in Western Michigan senior Trevor Gorsuch, CC’s Leclerc and UMD’s Shepard.

For most of the awards, finalists were determined based on voting by the conference’s eight head coaches with the top three vote-getters for each award (plus up to one tie) being finalists. The Senior Scholar-Athlete Award finalists were voted upon by the conference’s Faculty Athletics Representatives (FARs). Athletic Directors at each NCHC institution had a vote on Herb Brooks Coach of the Year, as well, along with the coaches.

In addition to these 10 award winners being announced at the NCHC Awards Celebration next Thursday, March 21, the NCHC will also announce its Sportsmanship Award winner and second annual Media Excellence Award winner. The NCHC’s Postgraduate Scholarship winner will be revealed this coming Tuesday. The conference recognized its All-Conference and All-Rookie Teams earlier this week, while the NCHC announced its all-academic teams in February. 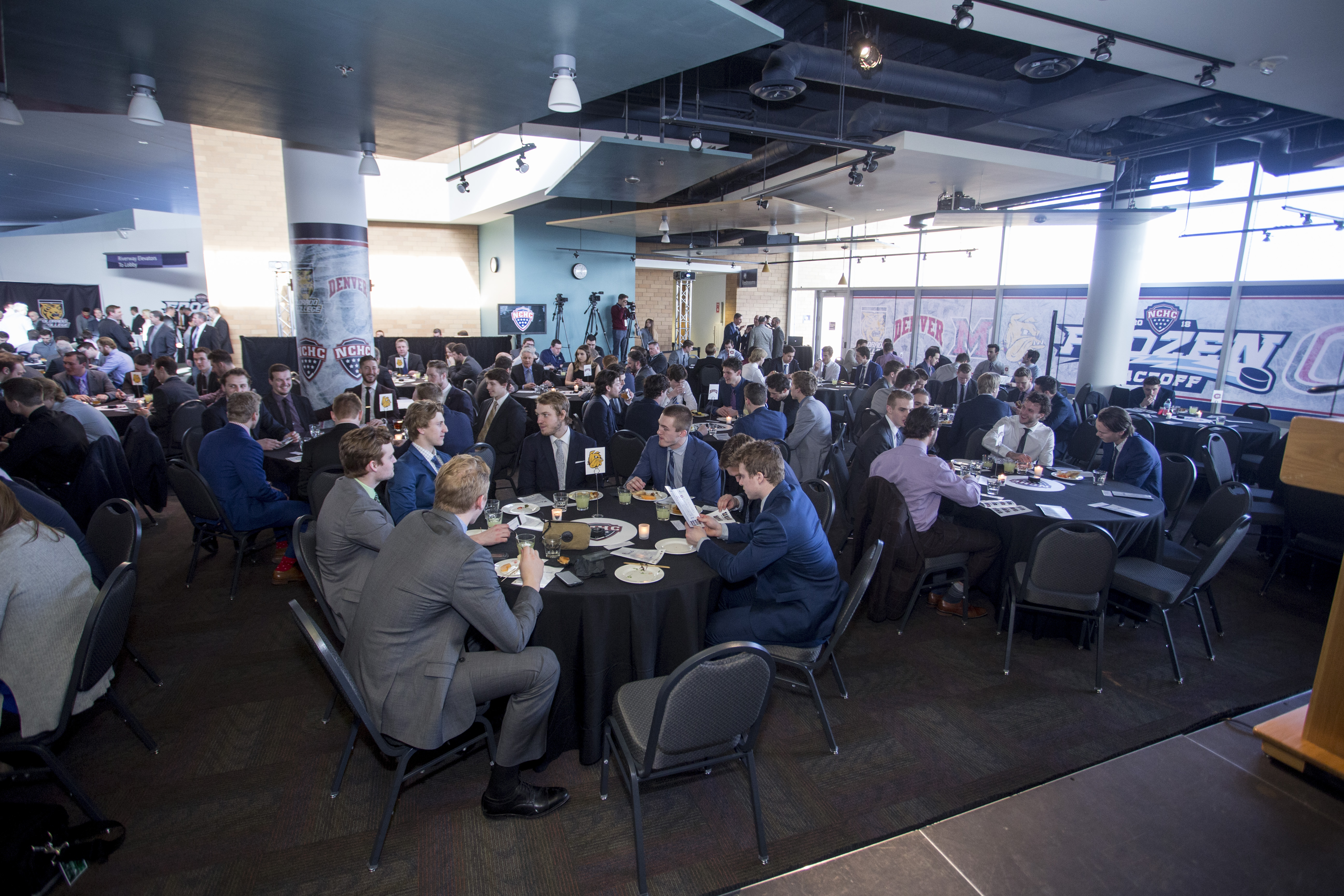 The NCHC's individual award winners will be announced Thursday, March 21 at the annual NCHC Awards Celebration in Saint Paul, Minn.